An Astronaut’s Point of View 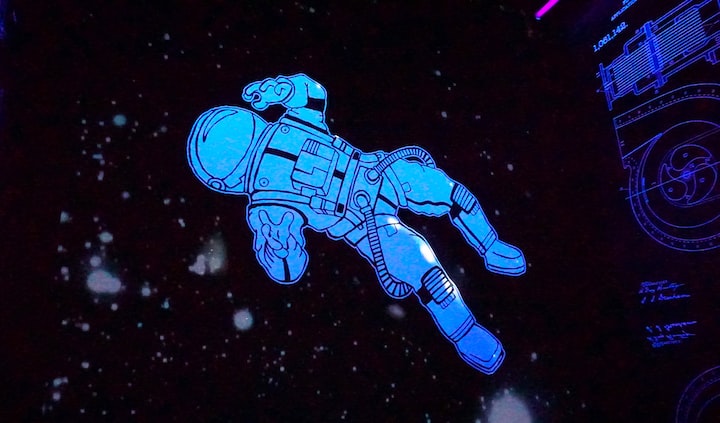 Photo by Monica Garniga on Unsplash

I read through the print-out the doctor had given me again. Common symptoms include nausea, stomach and back muscle cramps, bloating, constipation, diarrhoea… All relevant to me. I couldn’t really dispute the diagnosis. Sighing, I placed the pages beside me on the bed and ran my fingers through my hair.

‘No big changes,’ I thought, ‘just nothing processed to eat, no wholemeal bread, less beer, no sneaky cigarettes; something else to miss.’

I heard the floorboards creak on the landing. The door swung inwards to reveal my four-year-old son holding his glow in the dark space trainers and his full-face crash helmet.

“Mummy, is we going to play with my kite in the park today?”

“It’s ‘are we going to play with my kite in the park’ Jamie.”

“Are we going to play with my kite in the park Mummy?”

“How long will that be?”

“After lunch,” I looked at my watch, “which I’m going to make now.”

I stood and crossed the room, ruffling Jamie’s hair as I passed him in the doorway. He trotted along behind me.

“Um,” I ran through the contents of the kitchen in my head, “sandwiches, a yoghurt and a piece of fruit.”

“What kind of sandwiches?”

We had reached the kitchen, Jamie tried to climb onto a chair with his hoard in his hands.

“Jamie, put those down first or you’ll fall.”

“No ‘cause I got to be ready for flying my kite.”

He struggled with the chair, flinging his body across it and waggling his legs in the air. I shook my head and lifted his tiny body.

“Let’s put these shoes on your feet then you won’t have so much to carry.”

I turned him around and placed him on the chair, plucking his helmet from his hand.

“They isn’t shoes they is space boots!”

He waggled his feet.

“Are space boots Jamie. Put your shoes on please.”

I crouched in front of him as he pulled on his trainers and tightened the Velcro straps.

“It’s my space helmet, my space suit comes out of it when I put it on.”

“Right,” I stood up, “well I’d better feed my little astronaut some space food then.”

“A spaceman,” I replied from the fridge.

He jumped off his chair punching his free arm in the air and making shuttle take-off noises.

He whooshed and swooshed in a figure of eight around the table legs. I rolled my eyes and began buttering the bread.

He skidded into the cupboards beside me, breathless. After heaving air though his lungs, he managed a word.

He grinned at me with flushed cheeks.

“In the same sandwich?”

He sped off to his imaginary space station under the table, making laser noises this time. I smiled as I carved slices of ham.

Several minutes later I peered under the table at Jamie.

“Would my little astronaut like to take a seat at the table please?”

Jamie crawled out from under the table and scrabbled onto a chair, leaving his helmet on the floor; he knew that even astronauts didn’t bring their helmets to meals. He ate the first sandwich in silence then, as he began picking apart the second, he cocked his head at me.

“Is Daddy coming to the park with us?”

I put down the sandwich I had lifted to my mouth.

“No sweetheart, he’s not at work. We talked about this.”

“I know Daddy’s dead but why can’t he come to the park?”

I sighed. Part exasperated, part stung, and even (I surprised myself here) part amused. I looked into Jamie’s green eyes, the eyes of his father, and searched them, trying to fathom the reasoning powers of his brain. I tried to remember being his age, praying it would help me to explain this alien concept to his four-year-old mind.

“Yes sweetheart, I do know, it just makes Mummy sad to think about it,” I paused, rallying myself, “being dead means that people who are alive can’t see you anymore-”

I took a deep breath.

More stories from Alicia Brunskill and writers in Fiction and other communities.