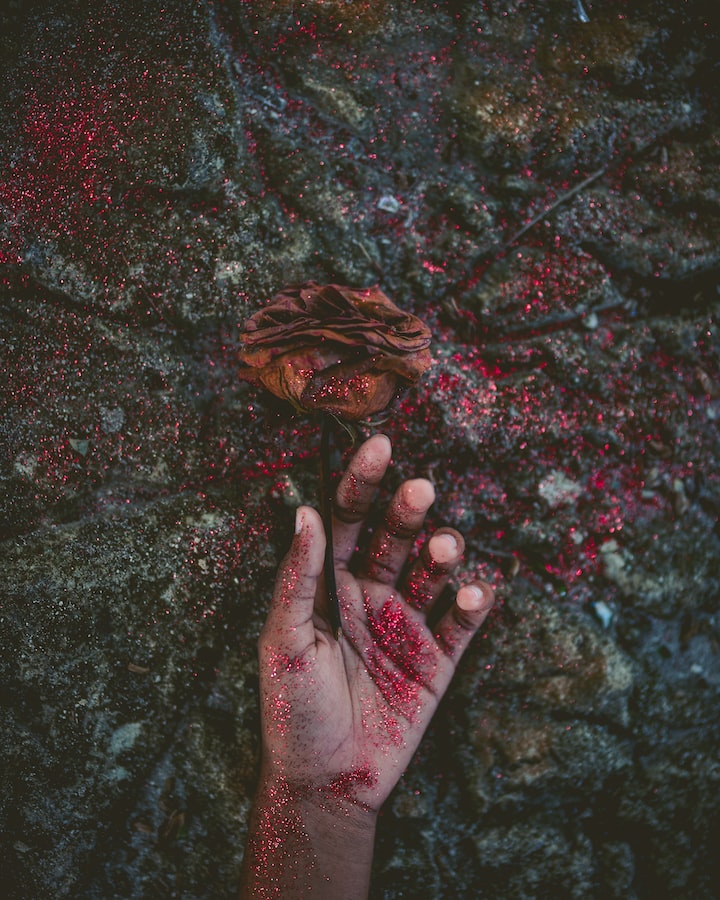 In 2066 the UN alongside the World Wildlife Coalition announced the extinction of all recorded wildlife. In efforts with the UN, a national broadcast was put out through all media outlets. In a desperate attempt to help document all species of wildlife, plant life, and any form of energy. Anyone with a pet at home, or house plants were encouraged to send in documentation. Anyone out traveling were forced to collaborate with local wildlife rescues, organizations, and non-profits to document any species found upon traveling.

The previous year 2065, the UN had stated that soil grown produce had to be thrown out, due to a highly toxic carcinogenic nuclear bacterial bi-product found in the water.

The world shut down for a second time, in recorded history for two generations.

From 2065 to 2066 the world was on lock down, food shortage, and truly quarantined to their homes. Each time it would rain, this unknown; what they assumed at the time to be a by-product of continual animal waste run off, and enviromental miscommunication. Animals were genetically engineered, pumped with poisons, and fed carcinogenic waste. Their excrement then bled into the ground water supply. With the general environmental miscommunication between all species, and their own self regulating environment, the strength of the planet caved.

This unknown, and unmanageable variable was infecting every source of nutrient intended for the survival of the human species. Like earths' own form of sebum. Trying to heal the festering sore of humanity. Unknown to modern science, unmanageable to modern medicine, and a plague oozing under the ocean floor. Resulting in bacteria micro-clusters, wreaking havoc on the water supply, and seeping into all surfaces. Carried through the air, and ultimately, results this world had never seen before.

Eventually there was enough fear tactics, and other paid-for propaganda that the world seemed to become stable again.

That the very death of the last society was that they were so connected, yet so disconnected. Literally, from their history, their truth, and their own reality. Also metaphorically, considering the amount of factual information that was able to be suppressed, and silenced in the age of technology.

Not even ten years later corporations were still leaking toxic carcinogenic waste into the water supply. Underwater oil rigs burst from the pressure. Those who were desperately trying to advocate for the planet were met by road blocks, and bureaucracy. Ultimately anyone who truly was accomplishing change or implementing policy were silenced in an entirely different way.

The year was 2076 all of the animals were extinct. House pets, were bred with the life expectancy of only a few months. Feeding animals were engineered, born, and slaughtered in labs for sustainability. The ocean was vast, and mute. The beaches, bays, and bayous had a murky build up of this highly toxic foam, or corrective sebum, and thick bubbling sludge. The edges coated in micro-plastics, and carcasses.

The year was 2077. A silent blackout cloaked the worlds’ governments’, and its' financial systems. Student loans, banking, and home loans were erased. Satellites evaporated, and technology froze. Chaos ensued. Bank vaults were open, but no currency existed. Stores raided, robbed, and looted, without a single purpose other than to be consumed by anything other than the present.

I only know this to be true, simply because my mother had lived prior to the blackout. She said anyone who was escaping, had to escape from humans. And because of humans, there was also nothing to escape to.

My mother, is called Kai.

She insists I address her casually. It is pressed upon me to never assume, or empathize with her position. She is Kai, nothing more, nothing less.

Kai previously stated to me in the past, that the concept of a 'mother' has no real place within the violent walls of this 'new world'. She continues to scold me with great concern for my willingness to live in the past, and the need to romanticize it. I think she truly believes that maybe one day, potentially I will stop asking these loaded questions all together, and just accept our fated reality.

Kai explained to me that I was on my first year of life, when the blackout occurred.

We, and we as human beings had been connected for almost two centuries. Beginning early on with the invention of something called the master web. Unlike a spider this web, this web was not tangible. It did connect everyone through microscopic waves of energy that carried data. This data allowed for communication to be instant, and constant. When this failed, anarchy began.

I had only been present, in the physical realm for several months when we were forced to say goodbye to the old world. Kai tends to quiet down, when I ask about the days that followed; how we survived, what became of others like us, or just the human existence in general.

While there was a period of stillness, this was intended to rid the world of harmful energies. Instead, in the darkness the weak minded humans turned even more vicious with hate. Already consumed by the darker energies of this continuation of duality. They became less human as they desperately held onto bloodshed, and fear. Clinging to the reality of pain, with their nails digging into the cement in spite of change.

I am called Six.

I am not sure of my age. I do know that I am existing, and despite all the bad, I am grateful. And although grateful, I still have many unanswered questions. I am hoping that through this exploration of self, I am able to potentially rid my soul of the discomfort this new life presents.

I found this pencil tucked between leaves, and other debris floating down the river to collect at the bay. Kai would most certainly rage, and redirect me if she was aware I had been fishing out scummy rubbish in contaminated waters. Either way, I took the pencil tried to disinfect it the best I could. Searched for a flat, smooth, and gritless tree trunk to allow it to dry. Laid sand down on top of the tree stump, with some bay leaves I had cultivated, and grown alongside some crushed jasmine, and aloe. In hopes of not splitting the outer wood lining; this would allow me to separate the led from the pencil, and could potentially have other uses - but for whatever reason I needed it intact. I had never had a pencil before. Kai has an ink pen made of cultivated blackberry ink, written from the tip of a hollow eagle feather she stumbled across prior to their extinction.

Kai says every book, most of the time originates from pen on paper, or pencil to paper. That the act of writing is sacred, and should be held with the upmost respect. Kai enjoys teaching, and states that anything you feel, or have to say should be written down. That is why she has saved, and manufactured so many journals during the change-over. Kai was an educator, creator, and advocate in the old world.

If it wasn't for Kai I would be no better than these humanoids demolishing, and burning what is left of our precious healing ecosystem. I wouldn't have the slightest concept of art, history or language. I wouldn't know what grass was edible, or even how to find it; how to find fresh clean water, which flowers or plants have antibacterial properties. Forget about how to cultivate seeds or how to keep myself alive. I would simply be brainless, running around like one of these man-eating cannibals turned sour from greed, disconnect, hate, and refusal.

For whatever reason, I feel compelled to create this, in desperate hopes that maybe one day I can read it to her in a different reality. Where we are free from persecution, and the misguided cleansings. It would all seem like a far away nightmare, one where you cannot quite discern if real or not.

Kai insists on the fundamental truth that to remain apart of the human expansive experience, and be a willing participant; we must take accountability for what our predecessors failed to see, something our ancestors embraced. The communication between all living things, earthly energies, and the duality of nature, and time itself. This was lost for many generations, and because so a massive break in the chain of truth, and justice. The universe continued to supply, and provide until literally unable to do so.

For a very long time there was darkness and stillness even before. Kai always tells me that most of the world hid what was really going on. If you were lucky enough to get a travel visa, you were placed in an enclosed virtual reality resort. The beaches were made to seem like they were expansive. Kai said everything you touched or felt was most likely genetically made, or structured. It was made for the sole purpose of looking real. With illusion it seemed real. “Trick the eyes, and the mind will begin to think it has been fooled” Kai would try to explain. I am often lost on some of her concepts or the metaphors she chooses to use. I have to assume that by tricking the eyes, it just forces the mind to second guess itself, like when I see a mirage while baking from foraging in the sun.

When the blackout erupted, Kai placed me in a hiking pack suited for the old worlds' overnight camping trips. Apparently for fun, before I was born, actually while I was in the womb, we would camp together. Ironically to get away from humans. Kai was able to escape with our lives, and our only valuables. A few journals, books for teachings, seeds for sowing, a limited supply of fresh water if unable to be sourced, masks to insure respiratory health, plant medicines, and the only precious metals Kai has ever owned. A twenty-four caret gold bracelet made of chains, linked together by a single gold bar with an inscribed date, and a pure silver heart-shaped locked with two dates inscribed on the back. It hung on a pure silver twenty-four-inch chain, with a small "K+S" inscribed on an oval shaped circle connecting the clips. The gold bracelet was intended for me as a small child. Kai has it intertwined with her modest locket, swinging from the chain, it hangs just above her sternum.

Although she continues to insist on never giving away her position in this new world; where to trust a stranger is imminent death. It is the true sign of a mother, to wear the birth of her child around her neck, hanging close to her heart. Connected by a locket, with her only photos inside.

She failed to mention to me that she was able to escape with only two photographs. She had them placed in the locket, the very same day she expedited the creation of my twenty-four caret gold bracelet. Inscribed with a date she saw in a dream. A premonition came to her. I came to her, as Six.

In this premonition, I told her I would be coming early, and we would need to be dressed in precious metals for future endeavors. I gave her a date to which I would be born, and around the time to expect me. I also gave her a second date. The date of May 27, 2077. Our last day together in the only reality she had ever known.

So it is my fated existence, that I channel my my soul on these fragmented pages. That I write, create, maintain, and document; for futures to come. I simply cannot be the only one, sitting absorbing, and wanting to create more than just madness.

I live in the depths of detail, in overflowing pleasures, and in heartbreaking truths.

Eternally lost without a pen.