A Tale Between Then and Here 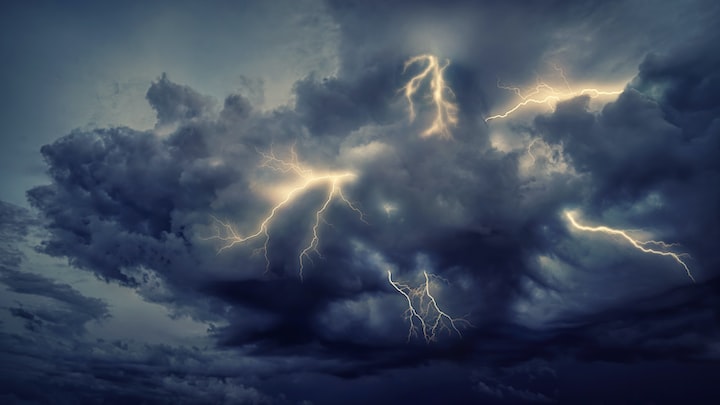 Her mother told her to stay nearby for fear of the storm rolling in. But Zara couldn't resist chasing a nibbling bunny rabbit out down the meadow and into a lonely, old barn. It would hop. Then it would stop and scan the area. Zara would pop back into its view and it would scurry off again much to her delight. Hop. Stop. Scan and scram. Hop. Stop. Scan and scram. All the while, the storm clouds moved in over them the way the first scoop of ice-cream turns over itself in a fresh container.

When the rabbit dashed through the open corner of the disjointed barn door, Zara fearlessly followed. Her mother ran her own real estate business so Zara was accustomed to roaming while Darlene spruced things up like lawns and living rooms. Wandering freely into an enormous and dilapidated barn made no difference to Zara.

The dip in lighting from outside to in caused Zara to lose sight of her furry friend. But, nonetheless. She had an old barn to explore now. And she was most excited to try out the rope swing that was dangling down from one of the middle rafters. What a simple joy it must have brought children far removed from real fun like building entire worlds online or riding electric scooters through busy downtown streets.

Zara grabbed hold of the knotted rope, learning which knot was best suited for her particular height. And pulling back and onto a stack of crates, she planned her ride; one foot pulling her weight back and the other wrapped around and onto the bottom knot. Here she was, ready to relive some other long-forgotten child's favorite youthful memories.

Fearlessly, she jumped. She made her descent towards the dirty, wooden floor. Then, like a commercial rocket ship released from some billionaire's private jet, she suddenly ascended towards new heights. But just as she started to feel the weightlessness of it all the rafter beam - rotted and weak - buckled under her pressure and she came crashing back down to the ground. Perhaps, she thought as she dusted herself off, the past was best forgotten.

That was until an old upright AM radio caught her eye from across the barn. Thunder cracked but Zara paid it no mind. She raced over to the radio and followed its funny looking cord to an outlet attached to some taut knob and tube wiring that trailed its way up the wall, along a rafter and into an old fuse box. Another roar of thunder filled the air. Zara wondered. What if the mighty storm clouds were bringing in radio signals that were seventy years old? What if ancient programs that got swallowed up into its magnetic electricity just bounced around inside; waiting to be picked up through a receiver just like this one so that they could live again? Reanimated through the electricity. She heard stories of how pilots would pick up distress calls from World War II. Maybe her old radio could pick up Jack Benny.

Zara turned the power knob and heard a click. Underneath the glass where the dial displayed the frequency a warm yellow light illuminated the contents inside. She turned the volume knob and at first she could hear some music breathing out from the glass tubes and stitched-over speaker. Faintly. It sounded like a waltz. Maybe it was from the big band era. But then it was gone; replaced with a sort of audible melting kind of sound. She turned the dial all around only to find static that waned then slowly drifted down into nothing at all. The light inside dimmed into a shade and, soon, the radio was dead. Again. Same as it was before.

Finding nothing of use to her inside, Zara brushed her way through a long-abandoned spider's web and went out to see about the storm.It was chugging along past her; gray like smoke, heavy like a washing machine packed full with soaked clothes. The crashing thunder felt like it should be saying something meaningful or spelling out some secret message. But she knew it was nothing more than hot air left over from an erstwhile lightning strike.

Off in the distance, with the storm all around her like a Jack Vettriano painting, was Darlene. She marched against it and towards Zara just as the multitudes of rain fell over them both. Darlene shouted tirelessly for her daughter to return to the vacant home she was pushing butat that exact moment, the rabbit recaptured Zara's attention. Only this time it wasn't running or hopping or anything of the like. It squatted peacefully in the meadow, fluffed up and fearless, as it patiently waited for the storm to quiet down and pass away. Their eyes met and Zara decided to do the same. She sat down onto the wet grass and crossed her legs like a wise Native American chief of old. Zara noticed her mother now. Still running against the storm to meet Zara between then and here.

More stories from Joe Deez and writers in Fiction and other communities.