A Shark among the Wolfpack

by Olivier Champagne 3 months ago in Adventure 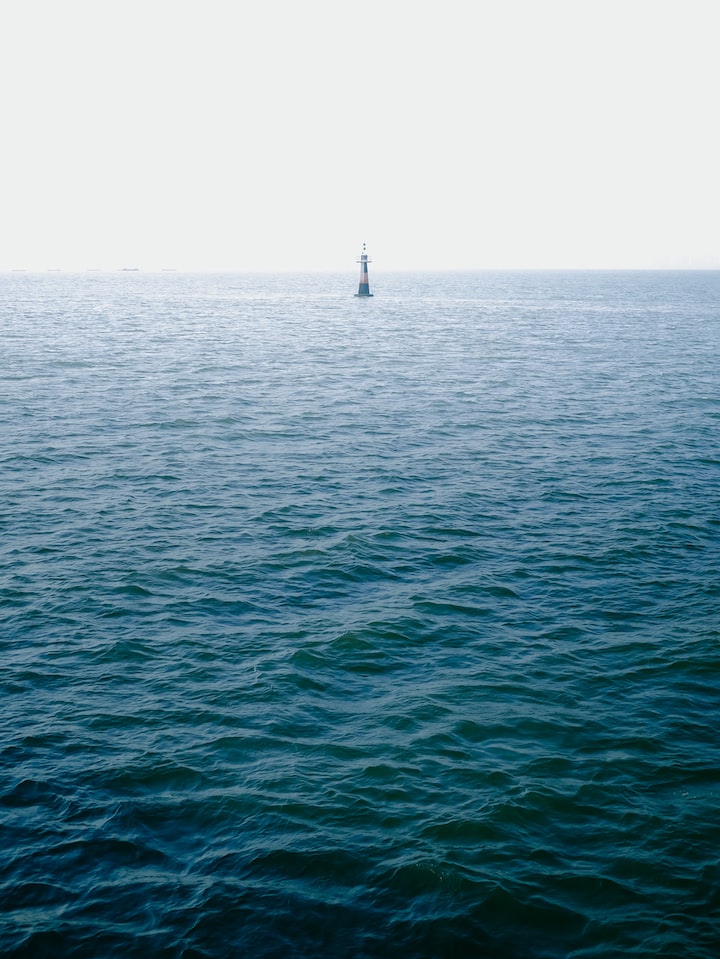 Photo by Dongsh on Unsplash

Able-Seaman Roland Jones' breath filled his lungs with the force of a boxer's punch as he finally broke the still surface of the Atlantic, and the Midnight air hitting his body made him realize just how much warmer the depths below were than the sky above.

A scant few hours earlier, Roland had been but one of several hundred crewmen on the destroyer HMS General Wolfe, which had departed from Halifax but 3 short days ago, acting as part of the escort for a convoy of war materiel bound for the English port of Southampton. Being a recent addition to the crew, Roland felt more uneasy than most of his fellow sailors, some of whom had been making the England-Canada run since the first days of September 1939. They had all told him to relax - the General Wolfe was loaded to the brim with anti-submarine depth charges and equipped with cutting-edge radar, and the combined firepower of the 3 destroyers and 5 armed merchantmen would be more than a match for any German surface raider, unless the Bismarck itself decided their convoy to be a fitting prize.

"And she won't," the General Wolfe's Captain, a weathered old sea dog by the name of Horace Featherstone, declared in his short address before the convoy had weighed anchor. "The Boche's big ships are hungry for glory against our Battleship boys, and old fat Hermann's precious Luftwaffe is too busy trying to knock out the RAF to pay much attention to shipping - not that they'd be a danger for most of the crossing anyway. And as for U-Boats, well, they're a threat, yes, but let 'em come, I say. The more of the buggers we sink on the attack the quicker this bloody war will be over."

The determination in the Captain’s eyes and the nonchalance with which he puffed on his pipe had settled Roland’s nerves, at least for a while. It was true that apart from submarines, there was little threat to their convoy from the rest of the German Navy, and the Atlantic was vast- in his two previous voyages, Roland had seen neither heads nor tails of the enemy. The Skipper’s probably right. Odds are Jerry won’t even show his face.

Then, shortly after midnight on the third day, the torpedo slammed into the destroyer’s keel like a sudden and angry thunderbolt. Water quickly seeped into the General Wolfe’s torn hull whilst fuel, ammunition, and a number of sundry flammable things began to pop and hiss and explode, casting tongues of flame towards the interior of the ship.

The pickets had not seen a single periscope, the radar had not given a warning. Admiral Donitz’s wolf-packs had found the convoy to be an unprepared gaggle of sheep.

Knocked to the deck from where he had been manning a lookout position, Ronald could hear the noise of rending metal and frantic shouts coming from everywhere around him. “It's Jerry!” “Why didn’t the radar pick them up?” “Gunners, depth charges, now! Star shells for illumination!”

But despite the frantic surge of activity and the sudden bursting to life of the General Wolfe’s weapon systems, Roland instinctively knew that his ship-and quite possibly the whole convoy-was doomed. He could already feel the deck listing under his feet and the fire from the torpedo strike threatened to ignite the main magazine and blow the whole crew to Hell. Ahead of him in the distance, he saw two tankers turn into iridescent blossoms of red flame as torpedoes ignited their fuel stores. The attack had been perfect.

Roland recalled seeing his friend, Ensign Wesley Crawford, desperately struggling to hold on to a railing before a bit of debris slammed into him and plunged him into the abyss. He could hear Captain Featherstone’s voice from the bridge above him, uttering curses and trying to restore order. The cacophony was deafening.

And then, with a force which seemed to rend the whole world apart, the main magazine went up in a flash. Roland felt himself being lifted off the deck and over the ship’s side. His last sight before he was submerged in the inky black water was of his ship listing more than ever and burning like a signal fire, great gouts of smoke and flame spouting all around the conning tower.

When he managed to calm himself enough to stop sinking, he located a ray of moonlight and swam up, his every muscle burning with exhaustion, until he broke the surface. General Wolfe was gone. Roland could see bits of wreckage here and there, and further away one of the tankers was still afloat, but burning, silhouetted against the night sky. As he desperately tread water, swiveling his head from side to side in hopes of locating other survivors. While he could hear screams from every direction, as well as shouts for help, he could not actually see anyone. With nary a familiar face or intact British vessel in sight, Roland was alone.

While the desperation of his situation sank in, Roland’s brain feverishly worked to locate anything that he could grab on to and at least float, in order not to follow so many of his fellows down to the bottom. He knew that merely avoiding drowning would not suffice to save his life-exhaustion, the cold, and lack of food and water had a very real chance of claiming his life. He had to consider that at least one German U-boat was nearby, and he risked being machine-gunned in the water or being ignominiously taken prisoner.

Just when these thoughts were tearing through his mind, Roland’s eye finally centered on something: A small shape , yellow against the dimming flames of the burning tanker, bobbing in the swell not 50 yards away from him.

Bloody Hell, a life-raft! My luck might not have ran out yet!

Roland swam with the energy of a man possessed, making his way through the oil-stained waters and fragments of what had once been the General Wolfe. As the life-raft filled his field of vision, he felt his leg kick against something beneath the waves. Roland froze in fear. His leg had struck something rough and jagged - he could feel small cuts along his calf. Must have just been a piece of wreckage, Roland thought, as he warily resumed swimming towards the life raft. The flames of the tanker had died down as that ship began to dip beneath the waves as well, and the raft now appeared as black as everything around him. Grabbing the rubber edges of the inflatable craft, Roland hauled himself aboard, but not before he felt that same rough, scraping feeling on his leg- right below him.

Roland immediately saw that there was another man in the raft - still alive, but either asleep or unconscious, judging by the sound of deep, undisturbed breathing. It was too dark for Roland to peer at the man’s jacket to tell which ship he had come from. Lacking all energy to disturb a fellow survivor, Roland himself settled in to rest his eyes, but not before casting a glance out to sea and suddenly understanding what his feet had bumped.

There, not 10 yards from the raft, silhouetted in the dim moonlight, a jagged and knife-like fin cut through the dark water.

Roland did not remember falling asleep but as he groggily opened his eyes and saw sun and blue sky above him, he realized he must have dozed off. Unfortunately, the next thing he became aware of was that there was a pistol pointed at his face.

The other man, who had presumably launched the lifeboat and who he’d assumed to have been a fellow British sailor, was shakily pointing a Luger straight at Roland. In daylight, it was clear to all that he wore the uniform of the Kriegsmarine’s U-Boat crews. Roland slowly inched his hands up and indicated he had no gun.

“You..are..my...prisoner,” the German said in halted English, giving thought to every word. “You..English..bastards...sank us. Depth charges. But I have you now!”

Behind the agitated German, Roland could only see open water. No sign of any ships, British or German. No sign of any coast line or potential rescue planes. They were alone, in the middle of the Atlantic.

“Mein Name ist nicht Fritz!” shouted the submariner. “My. Name. Is. Otto. And you will be quiet!”

“Sorry, Otto. Listen, firstly, it was you wankers who attacked us, so you’ll forgive me if i’m not bothered about your sub going down. But we’re in the middle of the bloody ocean, so I am grateful for your raft. How about we forget the war, eh? Just until someone finds us.”

“Forget the war? Nein! You are my prisoner. We will make a signal now,” Otto went on, indicating the raft’s two flares, “I am sure another U-boat will come.”

“Are you bloody daft? Your lot’s ran off, and mine are all sunk! We need to save those flares for when we have a chance!”

Roland could see Otto was getting even more agitated. He made to ready one of the flares as Roland inched forward to discourage him from loading the flare-gun. Before Roland could blink, the Luger was pointed at his face again. “Nein! If you will not sit still, I'll just shoot you and leave you to float!”

As Otto racked the Luger’s slide back and took aim, Roland glimpsed something else in the waves, making its way towards the raft.

Without thinking, Roland suddenly kicked his legs forward and struck Otto in the chest just as his finger pressed down on the trigger. The shot went wild and the German, dropping his gun and cursing, fell overboard with a splash. When his head surfaced, Otto took one glance at the shark fin and began screaming “Nein! Nein! Hai! Nein!”. The fin cut the water between the raft where Roland watched, stunned, and the anguished German. The seas were clear, so Roland could clearly see the immense, yet sleek creature: Black, lifeless eyes, a greyish-blue backside, and a pearl-white underbelly. No doubt excited by the blood in the water from the previous night’s attack, the White had staked his claim around the convoy’s resting place.

Bloody Hell, that thing’s a monster! Jerry’s done for, now.

But even as he thought this- and as the shark made circles around the raft, inching ever closer to the splashing Otto, Roland realized he could not watch. He couldn’t sit there while someone-German or not- was literally devoured. When the shark broke from its circle and dove straight towards Otto, Roland now seeing it’s ring of gleaming teeth just below the surface, he grabbed the fallen Luger and emptied the entire 9mm clip into the open mouth. On the last few rounds, the shark abruptly broke course and turned away, seeming more annoyed than harmed. Not wasting a second, Roland threw out a length of rope to the struggling German, who promptly grabbed it and hauled himself back on the raft.

“Because i wasn’t about to watch a man being bloody eaten. And because you could have shot me in my sleep, but didn’t.” Roland took the Luger, hefted it, and threw it over the side. “However, no more of this bloody fighting. Let’s try to get a bearing and at least head east.”

“All right, Englander,” agreed Otto. “Maybe your kind aren’t as bad as the Fuhrer says.” Then, as both men grabbed the raft’s emergency paddles and started to row, Otto began to laugh, uncontrollably. “What’s so bloody funny? We’re still probably both going to die, you know!”

“Hai. Er, Shark. That’s what we nicknamed our U-boat…”

And both men continued paddling on towards the rising sun in the Eastern Sky.