A Remainder of Hope

by Lisa VanGalen 10 months ago in Short Story
Report Story

Not all is lost 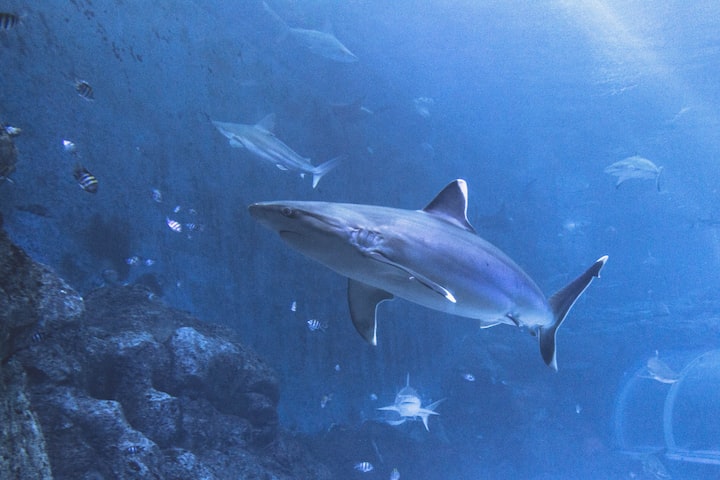 Patrick stared at the sonar screen, amazement radiating out to the crew.

Eyes glued to the image, he waved the others in to witness a miracle. Straight ahead was the object of this journey. After two months at sea, their target was real. She wasn't a myth after all. Shouts and cheers filled the steel vessel, ringing out into the depths of the ocean.

The words sounded silly as soon as he said them. The shark probably sensed them when they entered the chasm. They had beaten the odds. The experts believed there were no more sharks, that the last radiation blast had killed the sea life, right down to the smallest fish. For most, it seemed a waste of time to dive into the lifeless ocean, looking for one last shark. If they only found one, the species was doomed. But if there was one. And they could find it...

To Patrick, it signified hope: hope for the oceans, hope for humanity. Lifting his stunted leg, the captain eased out of his command chair and stood before his crew.

“I can't tell you how much this means to me,” he waved his good hand at the faces, “to validate the existence of even one shark. It means the waters are not dead after all.” He turned back to the screen, mesmerized by the shape moving across it. “And if they can survive, so can we.”

The submarine continued on its course as the shark swam casually along the far lip of the rock face. The image increased as their distance diminished, until she abruptly turned right.

“Aye, Captain! Hard to starboard!” The call echoed through the ship, the crew holding fast to anything they could against the sharp force of the turn.

Groans from the hull made Patrick look about, concerned. “Slow us down. This old boat can't take corners like she used to.”

“Aye, Captain.” The first mate slowed the turn while Charlie scanned the sonar.

Patrick's face showed his disappointment. He leaned heavily on the console. “We'll get her back,” he said. “We know she's out there. That's a start.”

The lights dimmed. He marked the passage of another day. If he wanted to keep them all sane, they needed to surface once a week. As they had not spotted any sharks in the past seven, that had been easy to accommodate. Now that they had made contact, Patrick worried about how to do both. They were due to surface in three days, for the crew to soak in some sunlight and to replenish the air. Could they find the shark again before the end of tomorrow?

Patrick started awake, fatigue dragging at his brain as he struggled to wake up. Commotion in the passageway brushed the remaining cobwebs of sleep from his mind. Elation surged as he shoved his feet into his boots and dashed for the control room. Still buttoning his shirt as he entered, the crew jostled around him, all wanting a glimpse of the green dot.

Charlie's eyes were glued on the screen, the strain of the hunt evident in the grooves in his forehead.

“Did you sit here all night, Charlie?” Patrick wondered, pride colouring his voice.

“I felt responsible for losing her yesterday.” Charlie's gaze never wavered, their target seeming to sashay along in front of the vessel. “I think she's playing with us.” The shark's signature undulation became evident as they neared the enormous fish.

He stepped back, clapping Charlie on the shoulder before heading for his chair. “Great job.”

Charlie beamed at the praise, redemption for the previous loss. He settled in for a long day. At the helm, Patrick absentmindedly chewed on his cuticle while he pondered their next task. Every choice came to an abrupt halt as he considered the number of hours remaining before they surfaced. He pushed off from his chair, his leg craving motion. And breakfast.

Charlie observed the shark lazily swimming through the depths. Fatigue created daydreams with him looking out through the eyes of the predator, searching, seeking, always moving. A thrill ran through his body, the adrenaline of the hunt. Sensations of being watched prickled her/his skin. In a strange way, Charlie could feel the submarine following, as if he had slipped into the mind of their target. The 'ping' of the sonar brushed along her/his sides, tickling her/his nerves and Charlie laughed.

The noise startled him and he awoke, his nose inches from the screen. He shook his head, uncertain of what had just happened. He looked around, but no one seemed to notice his catnap. If it was a nap.

Tucked in his rack, Charlie's dream returned. Sinking deeper than before, he became immersed in the shark, becoming one with the huge beast. His core muscles constricted and shifted as he swam, the signature side-to-side motion propelling him through the dense water. Crossing a trench, the current pulled him/her along, giving his/her fins a rest. It was like a fair ride, swooping up and down at the mercy of the underwater tide. The warmth surprised him, having expected to be chilled at this depth.

Hunger nibbled at him/her. Food was scarce, but not non-existent. She/he just needed to be patient and let the fish make more fish. It would serve no purpose to eat everything in sight. A species did not survive for millennia without learning stewardship and conservation, two things humans still needed to learn. She/he had to figure out if the tin can behind her/him was filled with trainable people or not. Today she/he would test them. With a flick of her/his powerful tail fin, she/he propelled out of the current, heading for the surface. 'Let's see what they will do', she/he thought, 'what they really want from me.'

Patrick pounded on the bulkhead above Charlie's bunk. The sound reverberated through the crew's quarters, but Charlie held fast to sleep. The captain resorted to shaking his friend, eliciting an unearthly groan. Barely conscious, Charlie wrapped his arms around his ribs, muscle pain making him wince.

“Are you alright?” Patrick asked. “You look awful.”

“I...” Charlie began. “What time is it?” He bolted upright, colliding with the upper bunk and regretted the motion immediately. He gripped his head to stop the vertigo. 'What the hell is going on?' he wondered. 'First I think I'm a shark, now I am seasick.' The green tinge to his skin gave him away, and Patrick reached for a small garbage container.

“You're not looking so hot.” He perched on the edge of the bunk. “What's going on?”

Charlie swallowed delicately before attempting an answer. Admitting to seasickness was an easier choice than explaining that he dreamt he was the shark and spent the night swimming in the trenches.

“Well, you missed chow. Twice. So yeah, you probably didn't.” Patrick said. “Can I leave you? I need to get back to the bridge.”

Charlie fell back onto the bed and waved his captain away. “I'll be there in a minute,” he lied.

The screen gave off its ghostly glow, the rest of the room shadowed. Charlie settled into the chair and gripped the console. 'No more naps,' he admonished himself. 'Focus.' His eyes were gritty and so was his throat. Maybe he was getting sick. That would explain the weird dreams.

The sonar alert showed the shark sinking below the thermocline. Charlie made an adjustment to keep the submarine on track. Each drop-off put more stress on the hull and the metal began to protest. Uncomfortable with going any deeper without the rest of the crew on deck, Charlie levelled off and hoped he could maintain contact without diving any further.

Charlie leaned in closer, afraid to breathe. If this was real, they had just found all the proof they needed. Only, no one else was here to witness it. The sub was outfitted with cameras and lights, but they drained the batteries too quickly to keep them running. Did he dare light up the ocean and everything around them?

Risking a glance at the control panel, he found the two buttons he needed and took a breath. Doing this would shorten their stay at this depth. They would need to surface within hours. 'Ask for forgiveness later,' Charlie decided and flipped on the lights and waited for the camera to come online. As the image crystallized on the monitor, he sat back, mesmerized. The school wasn't large, maybe two hundred fish. Tuna, if he had to guess by the size. Anything smaller wouldn't show up on the sonar or be visible at this distance.

And there she was. His shark. Swimming in a wide circle around the school. He lost sight of her on the far side, her spot blending in with the others and a mild panic edged in. There! On the right side, approaching the submarine. A quick flip of the tail and she circled again.

Charlie's eyes widened. “PATRICK!” The camera panned the scene, back and forth, on a set program. He didn't dare fiddle with it. He glanced at the console to make sure it was recording.

Footsteps pounded down the passageway. Charlie's gaze never left the screen, staring as the shark collected the tuna and herded them further along.

Silence filled the room, all jaws dropped. The old ways, the videos of sharks indiscriminately eating their way through the aquatic food chain would be erased. A cheer rippled through the boat and out in the water. Charlie watched as the vibration tickled the shark, making her wiggle as she curved around the back edge of her herd.

“That is utterly amazing,” Patrick said. “No one would ever think...”

Charlie looked up at his boss. “And no one should ever know.” His voice was soft but firm. “You have your proof. We've all seen it. But no one else should.” He gestured at the screen. “What do you think the governments would do if they knew there were fish? Do you really think they would protect them, as she is? Or take them for themselves? Make them the most expensive delicacy on the planet.” His voice took on an edge. “What we have seen cannot leave this ship.”

The shark continued her voyage, pushing gently to move the tuna into deeper water. One last pass. Her eye stared directly into the camera before flicking her fin to disrupt the water. Charlie reached out and turned off the recording.

“It's time to go home,” he said, turning off the lights and his sonar. The sea of faces before him registered shock. He looked at Patrick, hoping he understood. A simple nod from the captain and the tension flowed out of him. Charlie had not known how much this decision meant. With the release, his ribs screamed and he gripped his side. “I'll be in sickbay.”

The crowd parted as he navigated the passage to the onboard medical suite. 'Some tape and I'll be good as new,” he thought, a smile creasing his face. The intercoms squawked as the captain gave his orders to prepare to surface. Out there, beyond this tin can, lay the answer to the planet's survival. Charlie knew the secret would get out eventually. But for today, they could protect the waters from above, their periscope slicing the waves like a fin, the only marker of their journey.