A Light in the Dark

When hope fades into the night, you need a light in the dark. 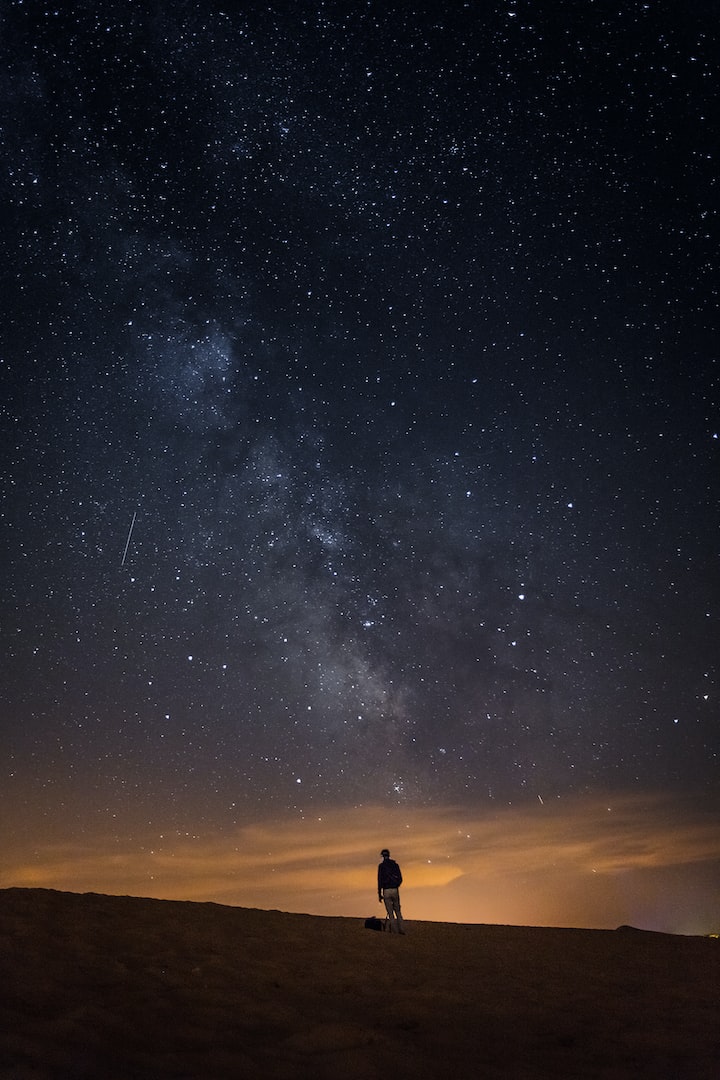 The slanted rain hit the pavement, freezing the previous drops in place. The looming bare tree no longer provided any protection from the elements. The abundance of lively shades of green had decayed into heaps of mush. There had been no signs of life since the lights went out. Much like the rest of the world.

Amelia waited in the darkness of night beneath the moonless sky. For weeks she waited and watched. Amelia waited for him to show so they could leave together. That was the plan. She should have just left on her own.

Under the tree, Amelia kept her gaze fixated in the dark distance. Eventually the early blue light of day cut through the darkened sky, illuminating the grey Stonebridge. She no longer held her breath in hopes of seeing a moving figure. Still, she can’t stop the sigh of disappointment.

“One more night” Amelia thought. She would wait for him one more night. That had been her routine for the last 90 days. Amelia knew it had long been time for her to go. It was getting colder, and she didn’t have the means to stay warm in the city. The upside to the lights going out is that it took more than half of humanity with it. Which meant there were few people to fight over what viable supplies were left.

The leftover remaining government came through and collected the survivors. Amelia should have gone with them, but she hid instead. Amelia had a plan. At least she wasn’t trying to survive in an unknown city. The memories of her childhood visits ran wild in these streets.

Amelia walked back through the deserted streets. Unlike the disaster films she had seen, the cars that remained, were parked neatly on the road. She made her way into the desolate office building and up to the second floor. She ate a slightly expired protein bar, washed her face, and dried her rain-soaked brown hair. She crawled onto the makeshift bed in the supply closet. It was stuffy but it was dark. It was in this darkness that she could sleep peacefully knowing that she wouldn’t smell the stench of death. Amelia had been dreaming about her brother every other night. She was only supposed to wait a week. Where else was she to go? What else was she to do?

“We need a plan. What if something happens when I’m away? How do I get to you,” Amelia had fretted. Amelia was not a big fan of change.

“Nothing bad is going to happen,” David tried to reassure her, but Amelia was too anxious to listen.

“I should just stay and find a school that’s closer to home,” she wonders out loud.

“Stop over thinking things. You’ve dreamed of going to this school since you were a child. I am not going to let you waste this. Mom and dad wouldn’t want you to.” David tried to reason with her.

Her hazel brown eyes looked up at her brothers. The brother who took care of her for the last two and a half years. His carefree gaze shifts into concern as anxious waves rolled off of her. It was no use talking to her in this state. He pulled her into a hug, telling her, “We’ll meet at the Stonebridge. The one Mom and Dad used to take us to when we ate ice cream.”

It was just a general “What if” plan. Had they known that they would need to use it, they would have planned better.

Amelia slept the day away in the darkness of the storage room. The movement of the night and the sun were the only source of life continuity she was able to depend on. There was a false sense of safety in this routine. When she woke to the fading light of day, she knew she had to break the lightless cycle. Each passing night was colder than the last. She could not afford to wait for David any longer.

Amelia crawled out of the storage room and made her way into a makeshift living room in the conference hall. All of the necessities she collected within a 5-block radius sat neatly in the vacant office chairs. Amelia sat against the wall on the conference table surrounded by pillows, eating beef jerky and a fruit cup. She made plans as the Sun sunk into darkness. She planned an escape she did not have the courage to make. She planned to head south. She felt her survival would fare better in warmer climates.

“I could go back home,” she lied to herself. She would have been able to go home had she not waited so long to leave. Going home would take her two hours up north by car. The use of a car in this new world would be foolhardy. A car in this new world was a beacon of existence. An existence that she didn’t want other survivors to know about. No matter what she told herself, they were all just excuses. She wouldn’t be able to bare the realization of being alone.

It was a long day of finals. Amelia was ready to leave school by noon. Her anxiety-ridden nerves couldn’t process anymore. At lunch time, Amelia called her mom wanting to go home.

“Just a few hours more. Afterwards, dad and I will pick you up and take you out for dinner. We’ll go wherever you want.” Her mom told her. A distraction and an incentive, it was all she needed to get through the rest of her day.

Her parents never made it. She waited at the school till the dark of night before deciding to walk home and find an empty house. David returned home to help take care of Amelia during her last two years of high school.

Amelia made a new spot under the awning of a bus stop. It didn’t have quite as good of a view of the bridge like the tree did. However, this spot provided a bit more shelter from the bitter wind. Amelia was impressed with her ability to sit unmoving in one spot for hours and not fall asleep. The hope that she might see her brother gave her the strength to keep waiting. Even if it wasn’t completely sensible.

Tonight was different, Amelia thought she was seeing things. In the distance, a hazy red light that seemed to fade in and out. As if the light was breathing on its own. She swore there was a hint of tobacco in the air.

“This cold is making me crazy,” She said to herself.

“Hello,” A voice called out from the darkness. Amelia felt her heart beating in her ears. It had been a long time since she heard another’s voice. She didn’t believe what she was hearing.

“Is someone there?” The voice was raspy like it hadn’t been used in a while. Whoever it was, it did not belong to David. Amelia wasn’t stupid, she kept quiet.

“I’m just gonna take a shot in the dark… pun intended… that I’m talking to the void, but this wouldn’t be the first time I’ve spoken to myself. David told me that I would find his sister, Amelia, here. I’m a friend of David’s,” the voice explains.

“Who is this friend? Where is David,” she thought to herself.

“Who are you?” She finally asked.

“My name is Jake. I worked with David at the shop.” Jake tells her. Amelia vaguely remembered David mentioning someone named Jake. She could have sworn David had mentioned the name Jason.

“Can you come out so I can talk to you face to face,” Jake asked. She kept her silence.

Jake chuckled lightly before saying, “Stubborn, just like David. I understand. Stay where you’re at.”

“Where is my brother,” She reluctantly asks.

“What do you mean he couldn’t make it.” She could hear the shuffling of his feet. She realized that each time she spoke, the sound of his voice got closer.

“I wish I could tell this to your face… I’m sorry to tell you he died…” his voice was faint. In the natural quiet of night, he might as well have yelled it.

“What!” A numb heaviness sank into her heart. A numbness not caused by the night’s chill.

“A bunch of us managed to survive when the lights died. David was on his way to come get you. We crossed paths with some people who thought they had some divine leading right on their side. They wouldn’t let us leave. So… we left by force. In the end, David didn’t survive. He asked me to get this to you,” Jake explained.

A light flashed on Jake’s hand. The illumination was barely strong enough to fight off the hungry shadows of the night. There was just enough light to see a gold heart shaped locket dangling from his fingers.

“That’s… is that…” Amelia cried out. It was her mother’s locket. The locket was given to her mother by Amelia’s grandmother. David tried to get Amelia to take it when she left for college, but Amelia was afraid she would lose it. After the lights faded, she thought she would never see it again. Here it was, hanging in the hand of a man she hardly knows.

“I’m gonna leave it on this newspaper stand. I know you don’t know me, but I promised Jake that I would find you. I feel I owe it to him to look after you. I would like to honor that if you’d let me.” Jake confessed.

Jake waited in silence before saying, “I’ll be back here tomorrow night.” Amelia could hear his footsteps gradually fade away. The soft scent of cigarettes no longer filled the air.

Amelia shakenly emerged from the shelter to grab the locket from the newspaper stand. The hope that had given her strength all these months was gone. David was gone. Amelia was truly alone. Amelia couldn’t feel the cold as she walked back to the vacant office building. It was only when she was tucked in the familiar safety of the storage closet did the dam behind her eyes finally break free.

The daylight was settling into dusk. Between crying and dreaming of David, Amelia didn’t get much sleep. The reason that has kept her waiting in a dark city alone, no longer stood. She knew it was time for her to go. She didn’t want to have to do it alone.

Amelia didn’t have to wait long for Jake to show up. He was tall, dirty blond hair with a muscular build. There was a bit of scruff on his chin, but his face was recognizable from David’s online posts. She didn’t know him well, but David had called him a friend. Jake came all this way for David, for her.

“I’ll come with you, if you don’t mind?” she asked tentatively.

“Not at all. Let’s go then,” Jake smiled brightly.

Falling in step with Jake, Amelia finally left the city.

More stories from Rosemary Kash and writers in Fiction and other communities.