by Ilyssa Monroe 10 months ago in Short Story
Report Story 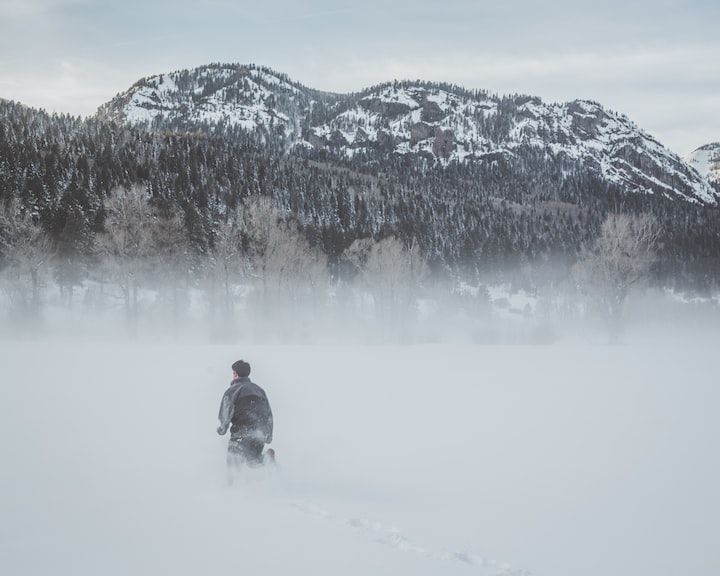 Photo by Connor Wilkins on Unsplash

The bitterly cold wind howled as tendrils of hair were ripped from the shield of my fur-lined parka. We have been on this path for what seemed like a very long time.

To the Northwest, there was said to be a valley of surpassing beauty, where waters flow constantly, fed by springs that are heated deep beneath the majestic mountain range. Another gust of frosty wind whipped past us, threatening to take our packs with it. I gripped the straps and trudged on.

There is also said to be animals that surround the area. These animals were said to be unaltered by the wars that ravaged this planet a thousand years ago. We want to see this so desperately that we have chosen to take the long and difficult journey.

We began our journey in the early days of Spring and our group was made up of the young and adventurous. Everyone in our township thought we were reckless and impetuous, but we did not care. We wanted to find a better future than our home could ever offer.

Our township, Westkante, was part of a great, underground tunnel system that had begun as a simple bunker when the wars had happened so long ago. The tunnel system was now extensive and sprawled far and wide beneath what used to be known as the Rocky Mountains.

Some of us had begun to explore the surface a hundred and fifty years ago but many became scared of what they found there. In their fear, they restricted outside access to an elite group of individuals. This elite group was known as the Seekers. They were meant to seek out a place on the surface that could be fortified against the monsters they had said, prowled the surface.

I wanted to be part of this group. That is, until one fateful night.

As part of my training to become a Seeker, I was assigned to patrolling the entrance into the Maw, a large cavern close to the exit of the tunnel system. The lights had been dimmed for the evening and most of the Maw’s residence were settling in for bed.

The sound echoed quietly down the corridor that led from the large steel doors that separated us from the surface. I was unsure if I had even heard anything at all.

But then I heard it again.

“What was that?” I asked Julian, my partner for the evening.

He had not heard the sound.

“Yeah, whatever,” Julian said, looking back down at the book in his hand.

I walked down the corridor, suspicious of the noise. Titas had an ID badge that would have let him through the door. Maybe he had lost it.

The banging grew louder and more frantic as I grew closer. When I finally made it to the door, I spun the hinge on the peephole open and saw a figure wrapped in furs standing in the midst of a blustering snowstorm.

I cranked the manual release wheel around on the door until I could pull open the door enough for the fur-wrapped person to step inside. The wind that blew into the opening had been frigid and had nearly swept me off my feet, but the person stepped through quickly and helped me shut the large steel door.

After a few labored breaths, the person began to pull off the large fur-lined coat. Beneath. an old man with a weather-worn face emerged.

“Thank you, kindly,” he croaked out, his voice was hoarse and scratchy with age. “It’s like the frost giants themselves are out to get this old man.”

“Who are you? Where did you come from?”

I had never seen another human that had not been born in the tunnels. He was tall despite his older years with skin as dark as worn leather and hair that was darker still. His eyes though were so blue they were nearly clear.

“My name is Randall, young miss. If you have something to hot to drink and a place I can lay my head for a few hours, I will not mind sharing a story with you. I haven’t been able to talk with anyone in quite some time you see.”

“Hold on, I will be right back,” I had said, before taking off back down the corridor.

I had run at a dead sprint to the storeroom just inside the Maw. Inside, I grabbed a tea kettle, water jug, several wool blankets, and a flint burner. Racing back down the corridor, Julian stepped out in front of me.

“What are you doing?”

“There was a man at the door. He’s not from the tunnels.”

Julian had looked just as shocked as I had felt.

“You aren’t supposed to just let people in.”

“There are no such rules,” I protested.

“That’s only because it has never happened.”

“Come with me, I want to find out more about him.”

Julian looked around cautiously, but curiosity had gotten the better of him.

When we had made it back to the steel door, Randall was sitting up against the wall cradling something in his arms. A small yip and whimper escaped his embrace before a small ball of fur jumped out of his arms and came scampering towards us.

I squealed and jumped back, and the ball of fur stopped in its tracks before running back towards the old man.

“This little guy is a wolf pup. I rescued him from nearly drowning in the river,” Randall smiled, rubbing the head of the little furball.

Julian looked at me quizzically.

I just shrugged my shoulders.

Once I had finished heating the water in the kettle and put some herbs in it, I handed it to Randall. He took a sip before wrapping the wool blankets around his own shoulders.

“Much better,” he sighed.

“Where are you from? What are you doing here?” I asked.

“Ah… Well, I live a long way away from here. About two months journey to the northwest of here. It used to be called Pleasant Valley. My family and community are there. As for what I am doing here, well that’s simple. I have been looking for you.”

Randall had told us all about his younger life and his journey to the tunnels late into the night before finally excusing himself to get some sleep.

In the morning, he had been gone but his small wolf pup was still nestled in the wool blankets he had used the night before.

The stories he had told us lit a fire in me and I had spent two months quietly talking to some of the others trying to get a group to travel with me to the place he had told us about. When the first hints of Spring showed themselves, I had a group of thirty-eight friends ready to go.

That was seven months ago, it was again Winter and there are now only twenty of us. We lost Caleb the first week into our journey when snow still covered the ground.

We were trekking through the thickly forested mountainside and were crossing a field with Caleb in the lead when the ground gave way beneath him. We had realized too late, that we were crossing a frozen pond that was thawing with the Spring heat.

Two weeks later, several of our group came down with an illness and we had to stop for several weeks as they recovered. Many did not. We lost Eli, Kayla, Sam, Jessup, Brian, Conner, and Lisa during those weeks.

We lost ten more when they decided to turn back and head home. The rest of us kept on trudging.

A month later we found Jacob and Tyler dead. They had been attacked by a wild animal when they had gone to the river to bathe. Their bodies had been ripped apart viciously. After that, we moved quickly and did not stop for more than a day and a half when we found an abandoned cave and collapsed into exhausted piles.

We left that cave two days ago. I know we are very close to our destination. We just have to keep going.

I feel a tug on the rope wrapped around my waist. We needed this so we didn’t get separated in the snowstorm that just came upon us. I turn around and saw that Lena had tripped. I helped her up.

“Just a bit further,” I yelled over the wind.

I turned around and pointed. Far ahead a bright red light shined dimly through the snow in the distance. We were, indeed, almost there.

When the blizzard finally broke and the Sun reappeared, a large column of smoke could be seen in the distance. From my left, Scamp yipped and broke into a run. Our strides even became longer as smiles began to form on our faces. We had weathered the journey and were finally going to find a new home.