by Camille 5 months ago in family
Report Story

Wearing my otherness on my sleeve. 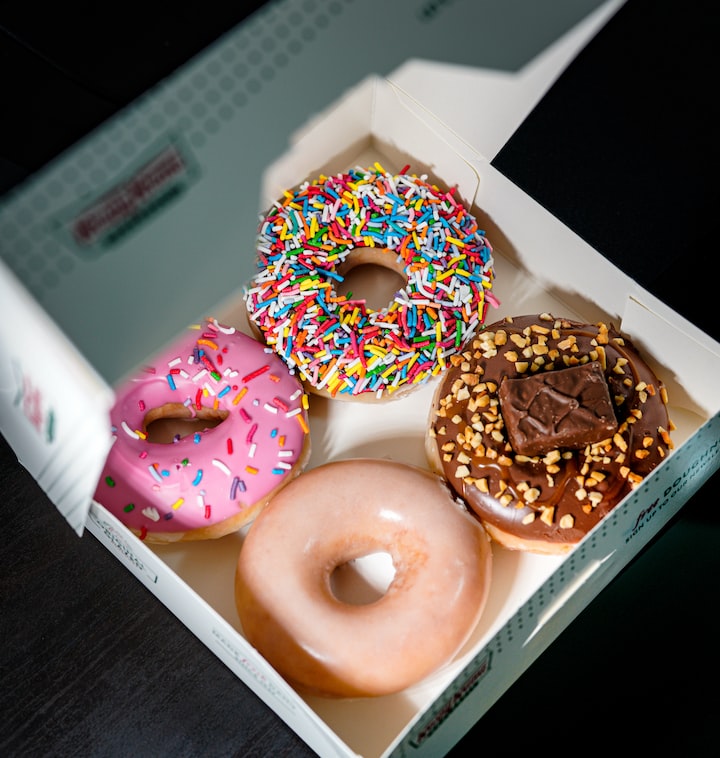 Photo by Fidel Fernando on Unsplash

I first realized that I was different because of donut holes. In public elementary schools, we had our traditions. Collecting six-pack rings to save marine animals like sea turtles in exchange for our pick of Jolly Ranchers. Selecting from the teacher’s treasure chest after each mastered level of our times tables. And my personal favorite, birthday celebrations.

I transferred to a private school in the sixth grade, and one morning, one of my classmates brought donuts to distribute to our homeroom. School started early enough that few early risers were lucky enough to bask in the morning’s golden blood orange glow, those six neon letters: HOT NOW. These were no ordinary donuts; they were Krispy Kreme donuts fresh off the glaze conveyor belt with all its waterfall wonder. None of that flaky, cracking stuff. The ones where your fingers stuck together and, although proper etiquette said to use your napkin, oh, what a waste that would be? So, you snuck and sucked the sugary sweetness from your fingertips.

Each student received a tiny dessert plate on their respective desks, not the free napkins at checkout from birthday celebrations past. Then, the unthinkable happened. My classmate and teacher started making their rounds—one on each side of the classroom—placing a donut on each plate. Whole. Entire. Donuts. I couldn’t believe it. My eyes were wide and wild. I surveyed the room to see if my peers were equally shocked. Nope. It was just me.

What the hell, I thought. Is no one going to cut these things into fourths? Halves?

Every kid got their own donut.

Now, ain’t this some shit?

Where I was from, classroom birthday celebrations meant donut holes from Dunkin’ Donuts, affectionately known as “munchkins”. The true and only barometer of wealth at that time was whether your parents splurged for the 50-count munchkin box so that everyone in the class could get two each. Oh, it was a sad fucking day when we all looked forward to Brian’s birthday, and his dad presented that measly 25-count box. We were devastated. The room filled with CO2 as we all collectively exhaled. I never looked at Mr. Bennett the same after that day.

But I had entered a new playing field, the upper echelon of donut dining. Thank goodness I have a summer birthday, so I didn’t have to overpromise and underdeliver to those greedy whole-donut-eating savages.

I mean, I ate the whole donut, too. Because no one goes to Sizzler to just eat eggs. You eat the whole damn buffet. My new private school classmates had likely never even heard of Sizzler. They would have probably recoiled at the mere mention of a buffet. I imagined them eating their hot donuts at home on imperial blue and white porcelain china with its gold leaf accents.

I mean, I really had no idea what their meals at home were like, but I doubt they looked anything like mine. My mom cooked every evening. Fresh food, too. No canned veggies or overly-processed poultry. Bless my soul if I ever forgot to take the chicken out of the freezer when I got home from school. We ate, but never together and never at the table. The table was for schoolwork, sorting mail, and grownup conversations where I’d be sent to my bedroom but listened from the stairwell anyway. And we almost always ate with the television on because what was dinner without Wheel of Fortune or Jeopardy? We didn’t need to sit at the table and discuss our respective days. I preferred to get the unfiltered office gossip from eavesdropping on my mother’s phone conversations like I always did.

When I was younger, before my family had two cars, my mom, brother, and I would pick my father up from the train station in the neighboring town. School-aged children were always selling snacks on the train. It seemed like a lucrative hustle. My father, a repeat customer, would always bring me Starbursts. Of course, he ate a few during his commute and would leave my brother and me to quarrel over the pinks and the reds. But Christ, I really loved those Starbursts and that family ritual, which was one of the only few times we were all just…together.

Then Pops got a car. A red Toyota Camry. I remember the day he drove it home. He had pulled into the driveway, music blaring and honked the car's horn. I’m sure our white neighbors were seething and calculating their expected loss in property value. I pulled back the blinds of my bedroom window that overlooked the front yard in time to see my father exiting the car. My brother and I ran outside to check out the new whip. In our eyes, it was the Cadillac of Camrys. We jumped in, petting the velvety, gray fabric of the seats, switching from the backseat to the passenger side and back again. And, when I saw the CD player, I swear the life left my body, and I went limp. I remember my father standing off to the side, taking in all of our excitement. Who knows what he was thinking? I imagined it was something like, this is who I do it for, or something equally sappy. Or, I’m a G and nobody can do it like me. I don’t know. It didn’t really matter. We were officially a two-car household.

My father drove that thing until the steering locked on sharp turns, and the engine cut out in the most inconvenient of places, which was basically anywhere that wasn’t the driveway. The car would lag and jump as if switched to the wrong gear, except it was automatic drive. When it had gone to rest in the junkyard in the sky, my father replaced it with a burgundy Honda Accord. My mother and I accompanied him to the dealership. My brother wasn’t with us anymore. He bought that car with little fanfare from his supporting crew and drove it off the lot the same day.

He’s retired now. He drives a Benz. An E class. I had to Google that because I didn’t remember. I guess he’s “made it” now.

But whenever I visit home, he’ll head out in the morning, and right before he walks through the garage door, he’ll holler, “Baby girl, you want anything from Dunkin Donuts?”

More stories from Camille and writers in Fiction and other communities.