A Doctor's Office, an Old Lady with Oranges, and a Bicyclist

A mundane event through the eyes of paranoia. 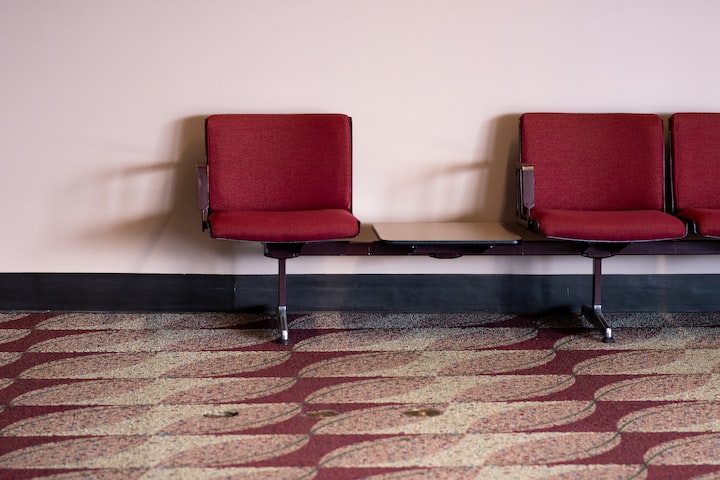 Photo by Nathan Bang on Unsplash

After only ten minutes of waiting, I began to shift uncomfortably in the chair. Ten minutes was not an awfully long time to wait in a doctor’s office, I knew that. Dad was slouched back in the chair, glancing through one of the magazines from the coffee table in the middle of the room. It was a magazine about geography. I knew my dad had no interest in geography. He was merely looking for company with anyone other than me, even if they were dull words and glossy images on a page. That’s why he kept looking up every now and then to look at me with a small smile, to illustrate how amused he was at landscapes and jungles. Dad must have imagined being in those places, where they don’t have boring sons.

There were only two other people in the waiting room with us. One was a middle-aged man: plump, bulgy, and shiny from a thin sheen of perspiration on his face. His little eyes peered from behind rimless glasses at a flip phone cradled in his sausage fingers. His mouth was agape, as he texted someone with painful slowness. This man hates modernity, I thought, as I watched the man’s face scrunch up as he forced the artifact phone into his khaki pocket. That would be why the chunky watch on his wrist was analog, and he didn’t have contacts lenses. He wasn’t old enough to not adapt, so he must hate everything new.

The other person was a young woman in business attire. Her large handbag was slung over one arm of the chair, as she read a small hardcover book. The spine of the book was wearing away, flakes of cardboard chipping off, the book giving a small groan with every page turn. It was her favorite book, one she had read time and time again, but one she only read at the doctor’s office. I knew she was terminal. I could tell by her tired eyes yet comfortable posture; she was so used to being in this office due to her illness. When I caught her eye by accident, when she looked up from her book, she gave me a polite smile. She didn’t want pity. She was a businesswoman, and she wanted her life to continue as normal. I winced at the thought. She looked so young; it was too bad that she would die soon.

I gazed at the clock on the wall: 3:18 PM. I looked at the nurse behind the sliding glass, seated in a computer chair and typing away, hoping to telepathically persuade her to call my dad’s name next, so we could get going already. I hated doctors. No amount of study and research could convince me to trust someone cutting into me or advising chemicals to put inside me.

The nurse called out my father’s name in a bored tone. She hated her job. Every morning, she has to force herself out of bed, I concluded, and I hoped to never live a life like that.

“That’s me, champ,” dad said, tossing the magazine back onto the table. I grimaced, the pain of the attack on my intelligence stung like it always did. I could, of course, recognize my own father’s name. But I also felt fear grip my throat as I knew I was about to be left alone. The pounding of my heart echoed in my ears as I watched my father go up to the nurse, exchange pleasantries, and walk through the door leading to the exam rooms. I then tried to remember where the emergency exits were and the best route home from this place. Normally, I would have some flimsy trust in my father in a dire situation, but I was alone and at the mercy of strangers. And the one time I didn’t have a plan would be the time I needed one.

Alone, the room buzzed with palpable dread. The sweaty man looked more irritated than before, on his phone again, pushing the buttons with more force, breathing heavily out of his mouth. The terminal woman’s page-turning was more vigorous, an audible flap with each turn, her face scrunched in deeper concentration for a story she already knew. I could feel my breath getting more strained as the minutes went by. I crossed my legs and my arms, hugging myself, slouching my neck inward, and tried to make myself as small and unnoticeable as possible. As my waiting roommates continued to pay me no mind, I felt a little accomplished.

It was 3:41 before I had anyone else to worry about. I heard the slow footsteps of a person enter the building, then the emerging form of an elderly woman approaching the sign-in desk.

This woman… against her neutral color clothing and held with her thin, spindly fingers was a burst of color: a red, mesh produce bag with half a dozen oranges in it. She had nothing else with her, except a handbag. My eyes widened, and she took a strained seat. She was sick. She was really sick, and there wasn’t a cure. This is just how her husband went. She didn’t want to die. So she decided she was going to make herself better by eating copious amounts of oranges. Vitamin C, right? She was convinced that it was going to make her better. It would make a difference.

I hated being around so many dying people. Images of my own twisted body, dead on some nondescript floor, filled my mind and caused me to shiver and huddle myself closer, trying to disappear further.

Perhaps I disappeared too well. Another patient entered the building. It was a thin, tall man with a shaved head. He wore formfitting fitness clothes and held a bicycle helmet by its strap. His face had a light tan and faint wrinkles on it.

And, with all the empty seats available, he decided to sit next to me. I was already tensing up with the man’s long strides in my general direction. Generally, people don’t choose to sit right next to other people when there are available seats. Yet, the bicyclist neatly sat down in the chair next to me. I had to look down at myself to make sure I hadn’t actually become invisible. His moves were exact and quiet; I couldn’t even hear the man breathe. The man’s brows furrowed tightly, his eyes staring at nothing in particular, and he had a sharp smell of hand sanitizer. I started to feel the acids in my stomach sing a sour song and a certain dampness form in the pits of my sleeves.

Every second that passed by just further confirmed my suspicion. This man was a serial killer.

The bike. He flees the scene on a bike. Faster. Quieter. Just like his movements. He has some kind of special tires that don’t leave tracks. He shaved his head. It makes it less likely to leave DNA. He cleaned his hands of the blood with hand sanitizer. They were in a crowded office complex. They would never find him. He had some crippling disease. He was taking people down with him. He wanted a legacy. And that’s why he was killing people. I was next. I was going to die today.

I tried the words for taste in my mind. Even if it would have been feasible to speak them aloud, my tightening chest would barely let me squeak out the syllables. I will be murdered today. The idea of death made me feel immaterial, as if my soul was all ready to leave my body. It felt like falling through the dark. No one could catch me. Tears were forming in the back of my eyes, but I choked them back. I hated my father for bringing me here and for leaving me with a serial killer. At least my dad could have protected me. Because, despite all my faults, despite the fact that I knew my father looked at his son with constant disappointment, that I was still his son. Paternal instincts would kick in, surely.

And… like a superhero bursting into an evil-doer’s lair, dad emerged from the backrooms of the doctor’s office, saying something to the doctor over his shoulder as he walked toward me. I sprung up, almost in tears. We could finally leave.

“Jeff?” my father asked excitedly to the bicyclist. The serial killer looked up from his intense pondering, looked up at my father, and his face lost its sternness immediately.

“Don! Hey, good to see you, man!” enthused the bicyclist/serial killer, jumping up to shake dad's hand. “How’s the new job been?”

I felt my entire being sink to my feet.

My father. My own father. The accomplice to a serial killer.

More stories from Brandy Stewart and writers in Fiction and other communities.