Why pineapple belongs on pizza.

by R M Matthew 5 days ago in cuisine

And I have the science to back it up. 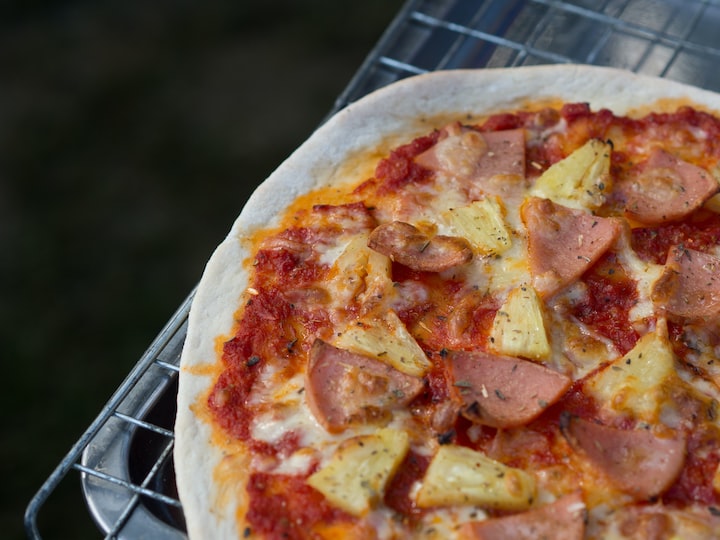 Photo by bckfwd on Unsplash

I love pizza. I love it so much that I would happily steal the last slice off my flu-ridden wife's plate as she blew her nose into a snotty rag. In the past, I have even cleverly sliced it up in such a way that I get way more than my young kids without them even realising. You can call me a bum and terrible father if you like, but I don't care. I knows whats I like and I will do whatever it takes to gets it.

I am not sure why this greatest of Italian inventions can bring out this particular side of me. Maybe it's the perfect blend of stringy melted cheese and crispy bread base. Or maybe it's the endless potential of toppings and flavorings. Whatever the reason maybe we all know I am not the only person in the world whose passion for pizza borders on the ridiculous.

Despite the obvious deliciousness and beauty of a well-structured pizza, there is also no other food in history that has proved to be more divisive; with millions of people regularly fighting to the death and getting divorced over what foods are worthy enough to be included in a list of must-have pizza toppings.

While things such as Smoked Salmon, mayonnaise, and BBQ sauce have all been questioned in the past nothing has split the pizza lovers of history more than that spikiest of tropical fruit, the pineapple. Personally, I love it. But then again the only topping I actually struggle with is anchovies, and this isn't a taste issue, it is in fact a texture thing. So asking a pizza addict who regularly inhales rubbish bought from the frozen section of his local supermarket what toppings should or shouldn't be used probably won't get you a fair answer.

However, an answer does exist. An answer that takes us on a deep dive into scientific theory and allows the truth to finally be set free. An answer that has been hiding behind a white lab coat and amongst the glass beakers and bunsen burners of an old-time physics set. An answer that can never be questioned again.

The thing is we all know what it is already. We have all sampled the delights of what science has confirmed when it comes to why Pineapple deserves a home on top of your pizza. Peanut butter and jam sandwiches, salted caramel ice cream, Wendy's Frosty and Fries, and of course sweet and savoury chips all work in the same way as sweet pineapple mixed with the saltiest of salty ham on top of your Saturday night pizza. But why?

Recent studies published in the Proceedings of the National Academy of Sciences have found that there is a certain part of the human tongue now known to contain the SGLT1 taste bud. This part of the tongue was originally only associated with sweet tasting foods. However, researchers have discovered that the SGLT1 taste bud is only activated whenever salt is present, which basically means salt and sweet mixed together actual enhances flavours rather than destroy them.

Of course, there will be those that try to tell me I am wrong. British celebrity chef, Gordon Ramsey, once said, "you don't put pineapple on pizza," while it's claimed that the president of Iceland once said he would outlaw the practice if he could. And while every person in the world with any sort of Italian heritage would probably agree with them my simple rebuttal will always be, "you can't deny the science."