The Meat, the Bones, and the Skin 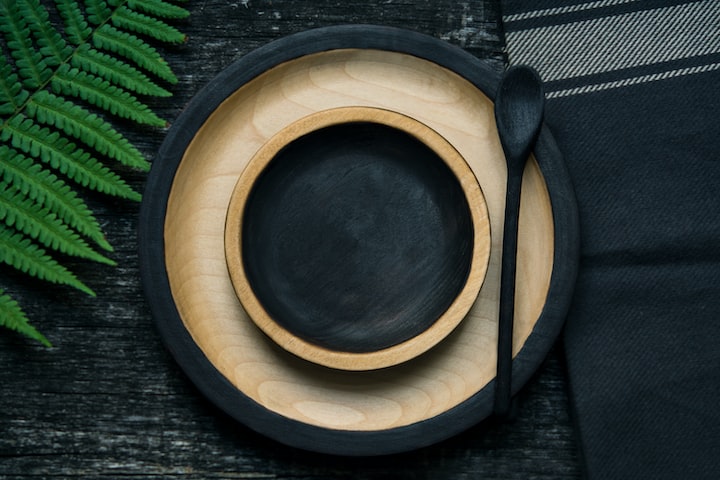 Photo by Jonathan Pielmayer on Unsplash

I grew up on meat.

Pork tenderloin wrapped in bacon to offset the taste of cooked frozen spinach. Meatballs with raisins no one can forget.

A luau on vacation. Pernil to keep it classy.

An extra freezer half full of farm-raised pork. Just in case.

Salty bones that splinter only in your mama’s warnings. Bellies, rinds, and bits ‘til you feel the guilty shame of the cruel irony that barnyard hogs smell just like syrup. Skin like scratched leather with errant, jet black hairs.

Weekly chicken nuggets. The occasional tender basket. Wings. Barbecue, garlic, and mild. Poking through the two-boned ones to bypass having to eat the skin of a chicken, the skin it died inside.

Grandma’s roasted capon stuffed with wild rice. Turkey legs and dipping sauce while we walk around the parks. Once a year, baste it in orange juice, lime, and beer. Taste the skin when no one’s looking. Dry the wishbone, grab the big end, pull and pray for something more.

An ostrich burger, once, to impress a date.

Burgers abounded. In the car, on the deck, topped with cheddar, dunked in pink sauce. Slathered in goat cheese and topped with aioli.

A couple of bites of bison. Never a buffalo.

Prime rib dinners with Grampa, and the magical au jus. The occasional rosemary peppered roast for Christmas, and those thin slices of delicious roast beast at the Who-table in The Grinch.

The other half of the freezer filled with grade-A cuts of beef from the local farm that feeds their cattle the hay cut from our field.

Pepperoni on pizza. Salami on rye. Prosciutto and pancetta thinly sliced with fruit inside.

An international meat tray of affairs.

But when introduced to seafood, I matured.

It was brand new. Softer in body. Harder in shell. All that work, all them bones.

The very first bite was worth what it took to get to it. Worth the boats for trolling deep waters. Worth the traps, the nets, and the necessary entanglements. Worth the claws, the fins, the teeth. Even worth the eyes looking right back at you while you chewed.

There were whole sushi boats to satiate a deep hunger for something delicately gratifying.

Shrimp and sea scallops wrapped in basil leaves and skewered between red onion chunks and pineapples or peaches. Grilled over an open flame that transformed sea creatures into sensual delights.

There were pearls of joy that had been kept safe inside the earth-toned and indigo rainbow shells. Ripe for fetching.

It had consumed me to the point of obsession. Like a mermaid on land legs with a fillet knife, a flame, and a fishful of vendetta.

Seafood so intriguing you had to speak of it in a different language. Or so high maintenance that it required special tools to excavate the tastiest bits. And the butter, my god, the butter and citrus and whatever it took to bring the flavor to its fullest potential.

But you had to be willing to boil things alive. To risk the life and death of innocents who sometimes perished so you could feast. It came at a price so high you could not speak of it in numbers, often only faintly listed as MKT.

But the meat. So soft. So easy. You could cook it or not. The indifference catalyzed the chase.

And the bones. A million tiny bones. A full bone fusion into a shell. What structure, what protection.

The skin alone, somehow, felt right. Being served inside itself.

Niki is a native of Syracuse, NY. She has had many professional careers: Zookeeper, Magician's Assistant, Organic Chemist, Fairy Godmother in Training, Aerialist. She loves to create and share the stories that demand to be written down.