Popular Ways to Use Garlic In Your Recipes

by Mark-John Clifford 8 days ago in recipe

Whether you slice, chop, smash, or grate it garlic is still garlic 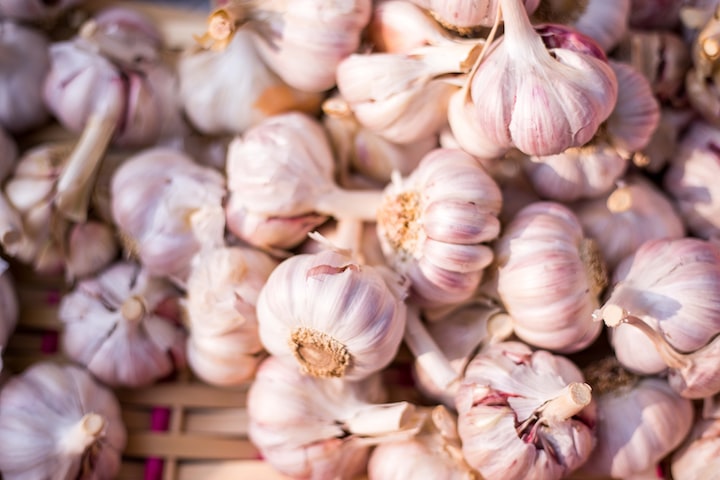 Photo by team voyas on Unsplash

Garlic is a staple in Italian cooking, and for that matter, it's just about a staple in any cooking style.

The big question is, when do you smash, chop, slice, grate or use whole when cooking. All great questions that are up to the chef.

There are a few instances when there is a specific reason for using one of the above methods, but in general, no matter which one you decide on, garlic brings a fragrance and taste not to be left out.

Over the years, I have seen garlic used in recipes in every conceivable way. From chopped, crushed, and smashed to the whole and everything in between.

Then there are the types of garlic used—sauteed in olive oil or a different kind of oil. There's garlic in jars of water or oil that have been crushed or chopped that you can find on markets shelves.

Garlic can come roasted, or you can roast it yourself very simply. Then there is black garlic which is milder and sweeter to the taste buds. Black garlic has been simmered over a long time which sweetens the taste and brings the intensity of the flavor down a notch, almost the same as roasting does.

There are numerous ways to prepare garlic, use garlic and purchase garlic in this world, and we get to try them all in our cooking. No one can tell us how to cook or use it and what kind we can use, whether from a jar or our gardens, and it's up to us.

We expect garlic in our recipes to add a flavor to enhance the dish we are preparing. For that, we need to understand how garlic can alter the flavor of our recipe that appeals to everyone's taste buds.

This is where our cooking skills shine. As chefs in our kitchens, we decide how to prepare the garlic, whether chopped or otherwise prepared, to add to our recipe's flavors.

Why would you smash garlic? There are a few reasons for this, one being to get the skin off easier.

Garlic is not the easiest herb to peel, as I'm sure you will agree with.

I've seen and tried some of the easier ways shown in videos by others and learned instruction from better chefs that work. Although, to be honest, they don't always work.

While smashing the garlic relieves its peel, it is also known to release the oils inside, which will enhance any dish you're preparing. That's why most chefs will smash garlic rather than chop or slice.

Of course, they want an easier way to get that garlic into their dish, but why not do both simultaneously and save prep time. Smash and add is something I heard yelled over the years by some great chefs in the kitchens of many restaurants.

It makes sense if you think about the process. All herbs have oils, and how you prepare them makes the difference of the oil being infused right away or over time. Many times you want that oil right away, so the smash and add system works.

You may not think of grating your garlic as something you would typically do, and you'd be right in that thinking.

It doesn't often happen or often enough, but grating garlic is something that can genuinely add the same taste as smashing does.

It does that by getting the oil out of the garlic clove as you grate, which in turn can be added to your recipe for enhanced flavor.

It's the same effect as grating fresh cheese over pasta, and the flavor stands out.Chopped/Minced Garlic

Chopping garlic takes more work with knife skills, and it isn't as easy as smashing and adding. You need to take your time, chop the whole clove into smaller pieces and then, holding your knifepoint down with one hand, chop the garlic using an up and down motion; bring the pieces closer together as you continue to chop, chop, chop.

After some serious chopping and moving the pieces of garlic around the board under your knife, you'll have chopped garlic as good as using a food processor.

I want to say 90 percent of chefs in homes or restaurants prefer sliced garlic, but that's probably not that accurate. I never did a survey, but working in restaurants over the years, the majority of the time, the prep cooks are told to slice garlic more than chop or smash.

Sliced garlic also has its uses, and I know people who want to see it in a recipe, not just taste it. There's something to be said about a visually appealing recipe.

How think can you slice garlic? That's up to you, the knife you're using, and your skills. The thinner the garlic, the more it will melt away in your dish. Sometimes to oblivion.

Here at home, Patti will always rather see the garlic than taste it. Not that she doesn't want that taste, but seeing is believing as they say.

Sliced garlic has a visual appeal to many diners, and they expect it, maybe in some cases demand it, and generally want to know they are getting the real deal. You can find sliced garlic in jars like you can chopped garlic.

Slice garlic in a recipe almost guarantees it's fresh, which is more important than anything else to someone enjoying a meal.

Not that slicing is always the best choice, but if you want your recipe to have that visually appealing factor, slicing is the way to go.

Don't get me wrong, after smashing, you can also slice what you have smashed, and there's something to be said for that.

Once in a while, there comes a time when you will want to use an entire, whole garlic clove. When you want to flavor oil or a sauce, you don't want the garlic to remain in the recipe is that time.

It's much easier to remove whole garlic cloves than to remove slices, crushed/smashed, or chopped garlic.

Think about it for a minute and visualize trying to remove crushed or even chopped garlic from a pan of hot oil. You're cruising for a burning in the most extreme case of removing the garlic.

No matter how you slice it, chop it, crush it, or smash it, garlic is here to stay, and stay it will. We are a people devoted to garlic for its flavor, improving our recipes, and how it can be part of healthy living.

That's for another day, though.

Family comes first. Husband to Patti, Dad, and Papa. a writer, publisher, & podcaster. I sometimes think I'm a good cook and baker. I'm originally from the east coast, and now living in California.