by Mark-John Clifford about a month ago in humanity

Why can chicken soup soothe the soul and everything else? 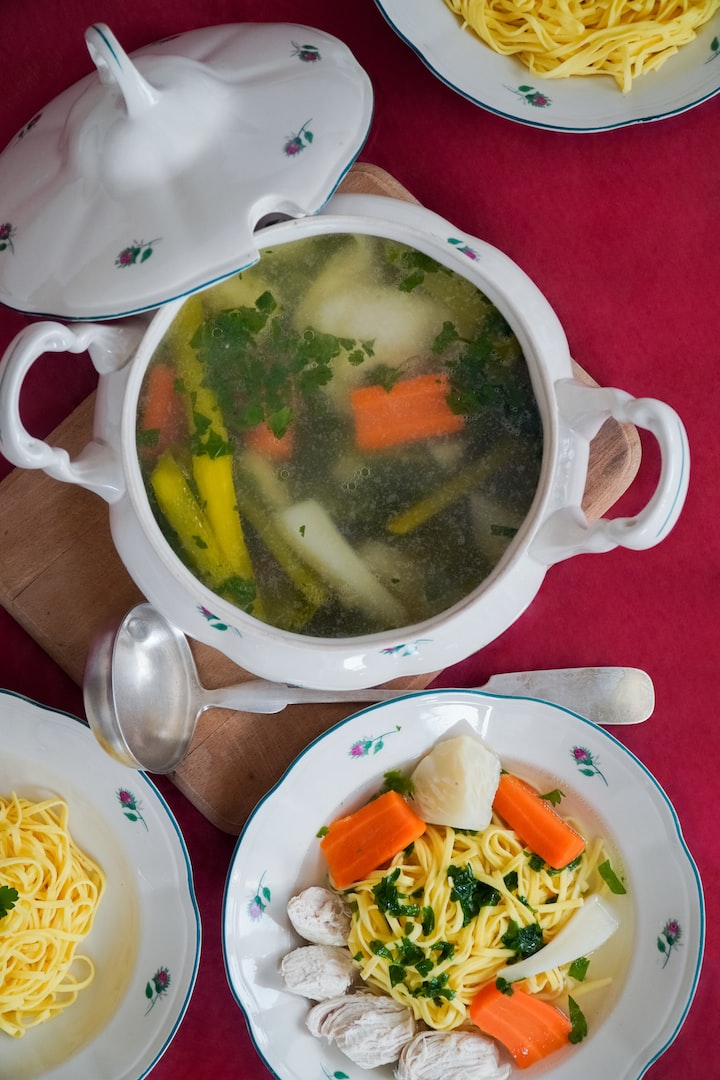 Photo by Karolina Kołodziejczak on Unsplash

For as long as I can remember, chicken soup has been the great equalizer in our family and our businesses.

Let's go back to my grandfather and start there. He was the Don or Mayor if you like of the village of Catania where I was growing up. Back in the day, I would spend summers there, and sometimes my parents would send me there during the year when they had to travel.

I remember most during those times how my grandfather used chicken soup in his daily deal-making responsibilities in the village. He used soup for those village dealings and businesses that dealt with his vineyard and other ventures in fruits and veggies.

No matter what it was, I remember him sitting everyone down at the table in our home, and he would pass around bowls of soup and fresh bread, and then they would get down to business—no yelling or arguing either. It was just a bunch of men arguing quitely over bowls of soup, but in the end, all the arguing stopped, and deals were made.

When we moved to the states, I watched my uncles, restauranteurs, lawyers, or other business leaders, use chicken soup to settle disagreements with vendors, clients, and associates. Chicken soup always seemed to work at those sit-downs.

When I was 15, my grandfather took ill, and in his last days, he explained what I always wanted to know. Why he and my uncles always used chicken soup when making deals or solving problems with others.

He made it quite simple. He looked at me and said, "chicken soup will get to the heart and soul of any man and make them agreeable to almost anything if put correctly."

He emphasized that chicken soup wouldn't solve everything, but it helped to break the ice with even your worst enemy in most cases. All you needed to do was get them to sit down and partake in eating chicken soup with you.

As I started getting more involved with the family businesses, I saw my uncles continually use chicken soup and learned more and more by watching how they used my grandfather's concept of chicken soup.

I constantly asked my uncles to let me in on their meetings so I could learn how to use chicken soup the right way or their way since it seemed to work in most cases.

I saw the toughest men bend to my uncle's wishes just as they had when my grandfather used chicken soup. It was something to watch and admire.

After college and I worked on Wall Street, I decided that it was time to test the waters with chicken soup on some deals and clients I was working on. I started inviting clients to the office at lunchtime and serving them chicken soup before attempting to get them to invest in stock or maybe a business deal.

I would have a taurine of chicken soup with enough bowls and spoons bowls on the conference table ready for when they walked in. Once we sat down, I invited them to have a bowl of soup as we talked. The chicken soup was homemade by me for each meeting, along with a fresh loaf of Sicilian bread.

I know what you're thinking right now; what if they didn't like chicken soup? The funny thing was it was exactly what my grandfather said to me years ago before he passed away, "no one will turn away from chicken soup, no matter who, what they are." He was right.

In all the years I served chicken soup to clients, I think only one ever turned the soup down. Even those who felt I had conned them to invest with the chicken soup would come back and have soup again and invest and left happy.

We would joke about it afterward with them, saying it was the nicest way they were ever asked for money they knew they might lose. It was amazing how much they enjoyed that soup.

One day, I asked my uncle, the lawyer, if he still used chicken soup in his dealings with other legal professionals, and he responded with a resounding yes. He said he couldn't see making a deal with chicken soup on the table, and it was the great medium or equalizer.

As my business grew, I stopped having clients in for soup, and some of my original clients were upset and expressed their feelings to me numerous times. They felt I was giving them enough attention now that I was growing.

I decided I needed to figure a way to keep serving chicken soup to my old and new clients if I wanted to continue to grow, so I worked it out and made sure to invite new and old clients at least once a month for a sit-down with me and the chicken soup. And my business grew.

When I left the firm I was working for to open my firm, I made sure the office had a commercial kitchen that I could work in at night, making my grandmother's chicken soup and bread for meetings. Each night before the meeting, I would prepare everything, and then early in the morning of the meeting, I would cook the soup and bake the bread. Then open the office.

Sometimes I would still be baking when the office would open, and the brokers, secretaries, and assistants on the second floor would catch whiffs of bread and soup coming from the kitchen on the first floor.

Over the years, my grandmother's chicken soup and Sicilian bread were a regular part of my business culture. Clients, assistants, friends, co-workers, family, and others expected and were served chicken soup whenever business was discussed.

Want to know the most amazing thing about this? Every time I had a meeting and served the soup, the outcome of that meeting was usually positive. The best part was that once we sat at that table and had soup while we met, the arguing that had gone on over the phone or in-person in an office disappeared, and deals were made.

Today I'm happy to say that chicken soup is the great equalizer. There's no doubt in my mind.