Two or Three Things About Grandpa

A simple and old coat, a pair of leather shoes full of "wrinkles", a forward hat, and a pair of dark blue pants, although the clothes are old, the grandfather always looks refreshed. In my impression, grandpa always dressed in this way, as if it had never changed. 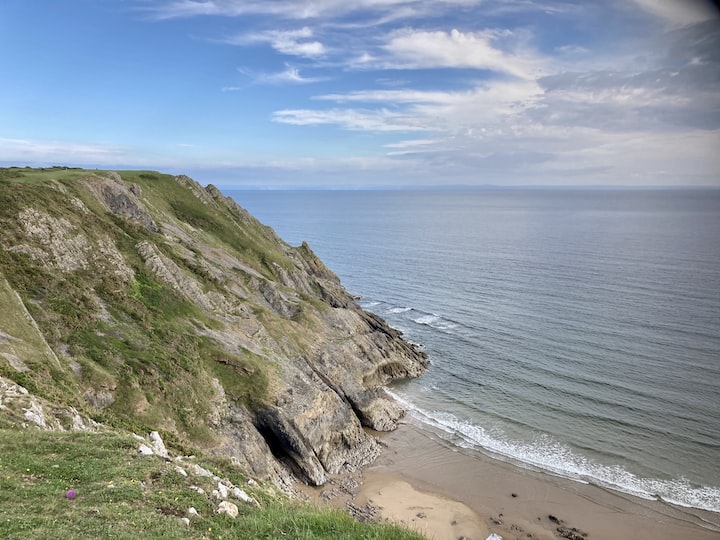 Photo by Rhiannon Elliott on Unsplash

A simple and old coat, a pair of leather shoes full of "wrinkles", a forward hat, and a pair of dark blue pants, although the clothes are old, the grandfather always looks refreshed. In my impression, grandpa always dressed in this way, as if it had never changed.

Our family was standing at the top of Xiangxiao Mountain, with the road down on one side and the "Shinshu Climb" on the other. Looking up at the steep 60° slope, there were only roots and dirt for the road, and only four swinging chains on both sides, which made people's hearts feel like a club. Looking at the hill that is not high, I would like to climb, but my eyes met with the meaningful gaze of my father, I know to take into account the others, they will hold back their feelings. Dad's voice in my ear: "The road above is too steep, let's go down the hill!" Grandpa is fist-pumping, eager to try: "What is this? I think when I was a soldier, the road is steeper and longer than this, you encounter this difficulty to retreat? Come, climb with me!" said, one hand to grab the chain, a foot on, I was happy to climb with grandpa, his agile hands, even we are slightly inferior. Looking at the flexible and courageous figure, I can't help but sigh, perhaps, this is not a difficulty for grandpa!

Grandpa went through the revolutionary period and suffered a lot, starving and freezing are common. So now nothing will be thrown away, just like the clothes grandpa, never changed. That time, the family bought three red sausages, and ate one that day, the remaining two in the refrigerator were forgotten, and by the time it was found, the surface of the red sausage had been covered with a layer of greenish-gray mold. Dad put them into a bag, tied them up, and put them by the door. The next day, the bag was gone from the doorway, and my dad and I looked over at my grandfather in unison to see him biting into the peeled red sausage with a childish grin on his face. He looked up and saw our helpless expressions, and hurriedly peeled off some red sausage skin, a large bite of the "flesh", cheeks instantly puffed up, a pair of eyes staring at us, afraid that we snatched the sausage thrown away. But who can say anything? After all, this is not the first time his old man has done such a thing.

This frugality is the eternal spirit in his bones, and our discouragement is just useless. After thinking about it, it turned out that this frugality came from his heart of family and revolutionary spirit. He always had a book of Mao Zedong's poems and a book of Mao Zedong's quotations by his bedside, like two immovable mountains. In his spare time, he always held these two books and read them intently, often forgetting to eat and sleep, as if he was already intoxicated as if a cavity of blood was still boiling, carrying a steel gun, charging into battle, and protecting the country. At night, my grandfather always told me a few revolutionary stories, whenever the exciting link, he closed his eyes, thinking of the scene, the mind has long been roaming in the long march. That day, the family went to the Chinese Pavilion Garden, where the chrysanthemums were in full bloom. We were strolling in the various pavilions to enjoy the flowers, but his old man moved directly to the Mao Zedong book pavilion, where there was an inscription with poems written in cursive. We all came over to look and guess what those words were. We saw him read it off with his hands in the air, and everyone there was in awe. Grandpa said, "Here, take a picture of me here." It's really rare for grandpa to take a picture alone, and as far as I can remember he only took a few family photos, but he left a photo here that was very valuable to him.

In the photo, the sun shines on grandpa, he shines in the sun with the inscription, or the old clothes, although he is simple, but also with the will not afraid of hardship and danger, faithful and unyielding, the reverence for the revolutionary cause continue to silently "revolutionary", that glorious image, in my eyes become this world The most beautiful scenery ......