by Ford Kidd 2 months ago in humanity
Report Story

Love us while we are alive 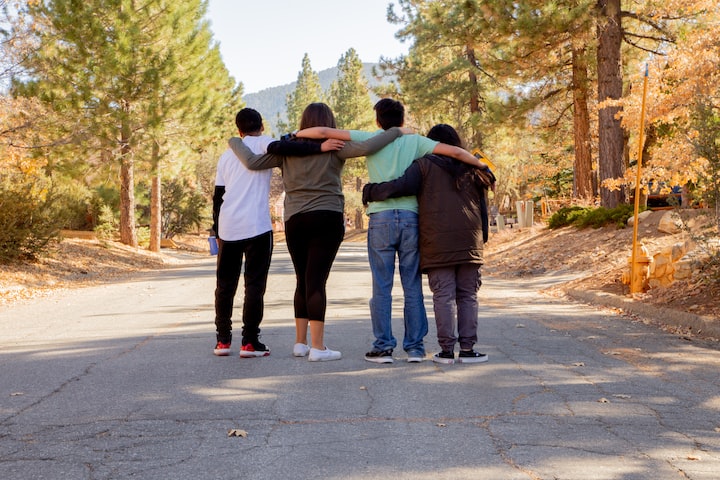 Photo by Emmanuel Olguín on Unsplash

In middle school, my friends and I put on a play called Difficult Childhood. The script was written by ourselves. We talked about school, family, unhappy love — about everything that makes childhood hard. So, you can take the script and stage the play today. Nothing changed. But the main thing remains the main thing. There was a scene in that play about children’s suicides. We seriously studied the material. Read the notes that the guys left. We talked with those who managed to stay alive. None of them were going to die for real. According to the then statistics, most of the suicides occurred between 6:00 p.m. and 7:00 p.m. They knew their parents would be home from work any minute. And they thought that mom and dad would be on time, and at the same time, they would understand that something had to be done. We read these notes from the stage. And understood one very simple thing, banal to the point of contradiction. We ended this part of the performance with words that I still remember: “If we had named the real reason for leaving life, it would have sounded something like this: “ I lacked love. Love us while we are alive.”

As a volunteer I once asked the teens if they could spend the time with their parents instead of hanging out on social networks, what would they prefer. You may not believe me. But almost all of them said they would choose their parents. Of course, with an amendment: “Depends on what we will do.” They want to walk in the park. Read books aloud. Play Monopoly. Prepare an unusual dinner. Watch films. Edit home video. Listen to rap. Talk about love and listen to stories about how mom met dad, at least for the hundredth time. They don’t want to report grades at school!

Now, who believes that teens that will be buried today weren’t “flogged” enough. The guys said: “Then it would have happened sooner.”

A girl at 16 goes to bed with a man not because her libido is rushing out of her. She gets into bed because she thinks this is the love she lacks. The child shouldn’t hear how the parents quarrel. I’m tired of explaining that in case of war, children are the first to be evacuated! And I don’t know if you’re aware or not, but most often the child considers himself to be guilty of parental quarrels. There are two options:

If at least once in the case of a public showdown you took not the side of the child, but the opposite, he won’t trust you. Never again. And won’t come for help if necessary. It happens, and often. And then we say to the teacher who scolds the child in front of you: “Thank you, goodbye.” And at home, alone, we are trying to understand: WHY?

From a FB discussion: “I think the parents have nothing to do with it. Love is broadcast and read by a child. The main crap: children strive for recognition by some kind of society, but society doesn’t take them. ”

Children in our center:

… I am a bad son because I have a low score in physics.

… I dream of becoming a director, but my mother says that I will not enter for anything.

… In our class, there are a lot of people like me — crazy.

… I asked my mother to help, and she told me to solve this problem myself because I’m already an adult.

And the last word. Don't expect your kids to figure out their problems on their own. They are not yet adapted to this cruel world. And when they do not see support from you, they look for personal solutions. And they think the best way is to leave.

Love them while they are alive.

More stories from Ford Kidd and writers in Families and other communities.