Understanding the Differences between Persian and Arabic Alphabets

by Sean Patrick Hopwood 6 months ago in how to

Although many perceive them to be the same language, there are many significant differences between Persian and Arabic alphabets. 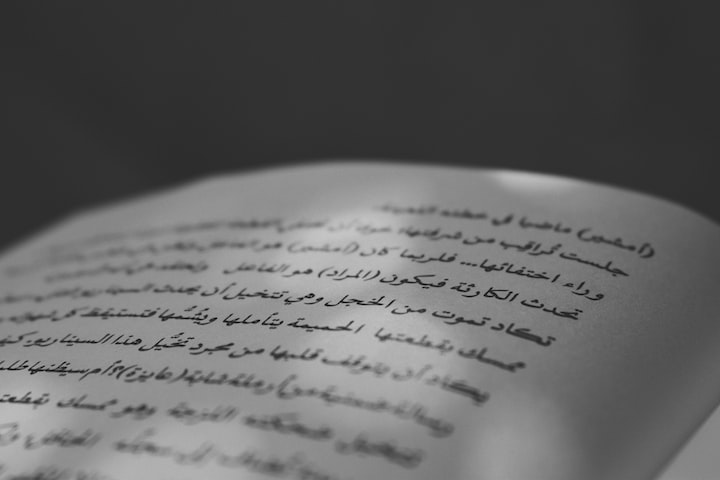 Photo by Rawan Yasser on Unsplash

There are many similarities, and the Arabic language forms the basis of the Persian alphabet. But here’s a quick guide on the similarities and differences between the two languages.

Exploring the Similarities and Differences Between Persian and Arabic

Persian (also known as Farsi) and Arabic are two totally different languages. What unites them is the fact that they share a similar alphabet and have an overlapping vocabulary that ties to Islam.

But in a sense, the similarities are like the ones that can be drawn between English and French. They only sound and look similar at times, but they’re vastly different languages.

If you’re not familiar with Persian or Arabic script, you might think the two written forms of language are one and the same. And in many cases, this would ring true since modern Persian (which is used in Afghanistan and Iran) is written in Perso-Arabic script.

In essence, this is the Arabic writing system that contains a few modifications to pronunciation and contains some extra letters.

In essence, the Arabic alphabet is the basis for many languages spoken throughout the Arabian Peninsula and the Middle East, North Africa, and as far east as India and even Western China.

Unlike languages like French and Portuguese that use the same alphabet and both form part of the same family of languages (Romance), Arabic and Persian represent two different language groups. Persian comes from the Iranian language family, while Arabic is Semitic.

So not only do these two languages sound different, but they’re also part of two entirely different groups of language families.

Pronunciation of Persian and Arabic Words

Persian and Arabic pronounce the same letters differently. “Harder” and more “guttural” sounds of Arabic words are pronounced much gentler in Persian or might not be pronounced at all.

Here’s a look at some pronunciation differences between the two:

• Qaff (ق): This is often pronounced in Persian the same as a ghayn (غ)

• 3ayn (ع): This is pronounced as a hamze/glottal stop in Persian

• dhaal (ذ) and the (ث): In Farsi pronounced z and s, with the names of the letters changed respectively

• “School” (مدرسة): in Arabic is madrasah, and in Persian is madreseh

• “Pen” (قلم): in Arabic is qalam and in Persian is pronounced as qalaaam

Grammar is where the differences between these two languages are perhaps the most notable. Everything, from the concept of verbs to plurals, cases, and grammatical gender, is different when it comes to Arabic and Persian grammar.

Here are some of the most significant aspects to keep in mind:

• In Arabic, verbs are inter-related, but in Persian, free-standing verbs are conjugated alone.

• Arabic uses gendered nouns, and when it comes to plurals, there are gender agreements in place. Farsi, on the other hand, doesn’t use any kind of grammatical gender.

• In Persian, plurals are super straightforward as opposed to Arabic words that change to form plurals.

• Persian follows a formal tone, whereas Arabic does not.

• Spoken Persian is spoken in much the same way that it’s written, whereas Formal Modern Standard Arabic differs vastly from the way it is written.

Arabic is well known for its diglossia, which is the phenomenon of two forms of language that’s spoken by a society. In Arabic, we have a formal, universal version of the language that’s referred to as Modern Standard Arabic (MSA).

They use MSA for writing, politics, news, public announcements, and anything that’s officially published. But Arabic speakers across the world use various dialects to communicate in everyday life, not necessarily MSA.

Since these dialects vary dramatically from MSA in some cases, many consider them to be languages in their own right. This is also one of the reasons that translating Arabic might be a complex process since the exact dialect and writing system needs to be identified and translated.

This is especially true for the dialects spoken in the Maghreb (North Africa), where the dialects are influenced by local Berber languages, French, and Spanish.

Due to the Arabic language’s diglossia, it’s considerably harder to learn Arabic than it would be to learn Persian. This is because you’d need to master two forms of the language to master conversational and spoken Arabic.

You’ll also have to consider which dialect you want to learn because individual dialects aren’t always mutually intelligible.

Unlike the Arabic language, Persian doesn’t have the diglossia problem. Yes, there are different Persian dialects; the differences are not nearly as pronounced as in Arabic.

Is It Easier to Learn Arabic (or Persian) if You Know Persian (or Arabic)?

The short answer is yes. If you know either one of these languages, it’ll make the learning curve for picking up the other much more effortless.

It might not give you a significant advantage, but at least you’ll have a vague sense of familiarity with some words.

Think of it in the same way as knowing English when you’re trying to learn German. Even though the two languages are very different, they share similarities that make one reminiscent of the other, however vaguely it might be.

If you know either Persian or Arabic, it’ll give you a head start with reading ad writing since the two alphabets are mostly similar. You’ll also have a slight advantage when it comes to pronunciation if you know either one of the two languages.

Although the pronunciation might differ, both languages share similar sounds, but the advantage is much more noticeable if you’re going from Arabic to Persian.

Should You Learn to Speak Arabic or Persian?

This entirely depends on why you’re looking to learn either one of these languages. Is your goal to be able to speak to locals, or do you want to read texts effortlessly?

Do you want to learn a rare language like Farsi, or do you want to pick up on something that’s more widely spoken? And lastly, where do you plan on traveling to?

Are you going to the Middle East (Arabic) with your language, or are you heading to Central Asia (Persian)?

In most cases, it makes sense to learn Arabic instead of Farsi because it might open up doors of opportunity as far as professional connections are concerned.

But on the other hand, learning Farsi is almost a guaranteed way to touch the hearts of unsuspecting Persians.

Facts About the Persian Language

Closely related to Old Persian, Modern Persian is written in Arabic characters and uses a range of loanwords from the Arabic language.

Since it lost most of the inflectional systems of the old varieties of Persian, modern Persian grammar is much simpler than its ancestral forms.

It has no system of case inflections other than markets to indicate when nouns and pronouns are direct objectives. It also uses auxiliary verbs instead of a single complex inflectional system to indicate mood, tense, voice, and negative.

• Farsi is one of the oldest living languages on earth.

• The Persian language shares similarities with the French language.

• Despite the differences in pronunciation and grammar, Farsi, Tajik, and Dari are mutually intelligible.

• There are Persian language poems inscribed in the Halls of the United Nations.

Facts About the Arabic Language

The Arabic language is a Southern-Central Semitic language that’s spoken in North Africa, the majority of the Arabian Peninsula, and other parts of the Middle East.

It’s also the language of the Koran, Islam’s sacred book, and the Muslim religious language. Literary Arabic, the language used in the Koran, is uniform throughout the Arab world, but colloquial Arabic comprises various spoken dialects, not all of which are mutually intelligible.

Compared to other languages, Arabic shows the fullest development of Semitic word structure. Arabic words consist of two parts; the root and the pattern, the latter of which gives the word grammatical meaning.

• There are 14 different Arabic words in the language that describes “love,” each depicting a specific stage of falling in love.

• Since Arabic and Hebrew are both Semitic languages, their similarities make it easier for Arabic speakers to learn Hebrew and vice versa.

Does Persian and Arabic Have a Lot in Common?

As you can see, the answer is no. Persian and Arabic are not the same language, even though they share historical ties.

They don’t really have that much in common, aside from a shared alphabet.

The similarities end with the script and loan words from Arabic that are used in Persian.

The grammar differs dramatically. Aside from loan words, there’s no lexical relationship. And the differences in pronunciation are worlds apart.

There’s essentially no good reason to compare the two with each other.

Comparing the Persian language and Arabic is like comparing oranges to apples.

Apart from their shared script, there isn’t a lot that unifies the two languages.

More stories from Sean Patrick Hopwood and writers in Education and other communities.