The Day I Cried in College 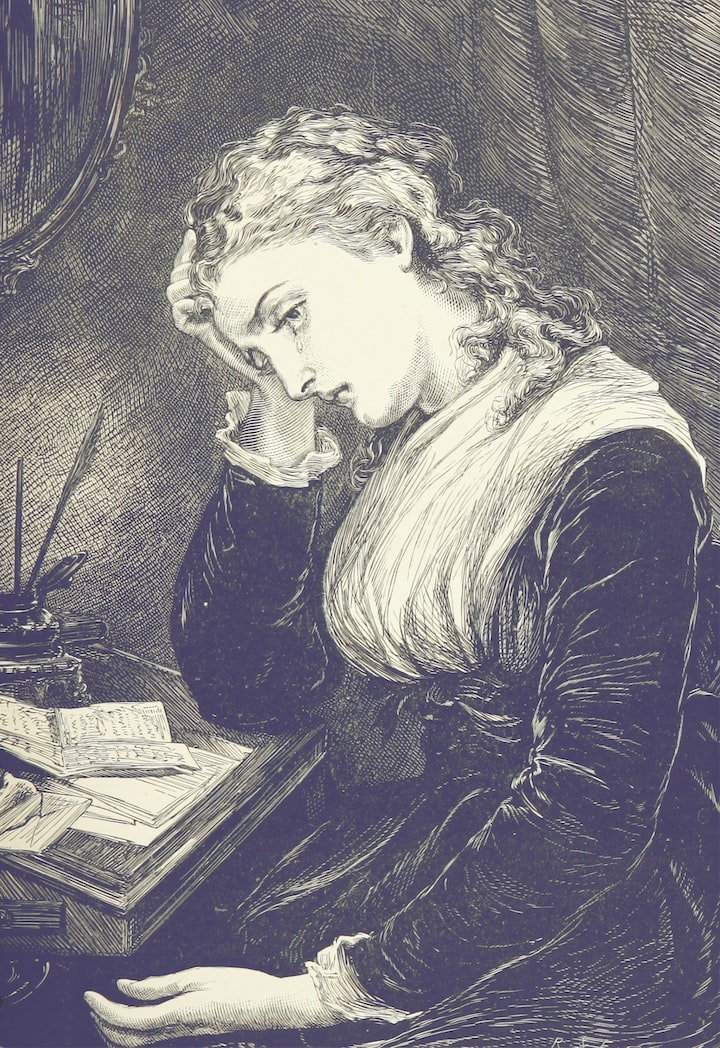 Photo by British Library on Unsplash

As an artist, I often tell people that one of the scariest things I do on a regular basis is to walk into a shop, show my art to the proprietor and ask if they are willing to sell it. I’ve talked myself into doing this scary thing many times, but it’s still nerve-wracking. One of the scariest things I have ever done in my life, though, was to walk into our local community college and ask for directions to the registration office. On my last day of high school more than forty years earlier, I had walked out promising myself I would never set foot in a classroom again.

It hadn’t always been like that. Like most kids, I’d spent the first few years of school learning to read, write, do basic addition and subtraction, and get along with other kids on the playground. These were challenges I could handle, and if I ever thought about my place in the educational system at all, I thought of myself as a good student.

“Barbie daydreams.” The terse note my teacher had written on my third-grade report card stared back at me. Suddenly, I had a mental image of myself as my teacher must see me: sitting at my little desk, chin on hand, eyes on the drifting clouds, while the rest of the class - the non-daydreamers - paid close attention to the multiplication tables. I was filled with shame. I daydreamed - apparently, a serious enough fault that my parents needed to be informed.

It was the first time I’d gotten negative feedback from a teacher, although from her perspective it might have been no more than an observation - possibly even an indirect compliment. (Was I so bright that I was bored in her class? She would, later, recommend me for an experimental, accelerated program in another school.) At any rate, I took her written comment as criticism - so, I seem to remember, did my parents - and it took my self-esteem down a notch.

I would struggle with concentration issues as long as I was in school, and sometimes my grades suffered because of it, particularly in my least favorite subject: math. It wasn’t that the work itself was too hard. I just had a hard time focusing when there were so many other things I would rather be doing, such as drawing pictures, or sewing, or finishing a fascinating book - I could spend hours in the public library, and, given the opportunity, I could practically swallow a good book in a single sitting. I had multiple outside interests, but even normal kid worries - things I had seen in the newspaper, or on TV - could distract me from schoolwork. And then I would miss something crucial in class because I hadn’t been paying attention.

Physical education, the favorite subject of many non-academically-inclined students, was a nightmare for me when it involved team sports. Having a reputation for distractibility (along with slowness and lack of enthusiasm) could make the difference between whether you were chosen first or last for a team, and after the humiliation of being among the last ones chosen, you still had to play the game.

Most embarrassing of all, I cried easily, a personal failing which invited scorn and ridicule from those of my classmates who possessed more emotional stamina than I was able to draw upon. Even some teachers reacted in dismay at the first sign of tears. In addition, my general social awkwardness (of which bursting into tears was only one aspect) made me wonder if most of my fellow students had been issued the key to some kind of exclusive Coolness Club - a key I had, mysteriously, not received. Why couldn’t I just grow up and act like everyone else?

School was like an obligatory job - one in which I had few, if any, real choices - where I couldn’t hide, I couldn’t even blend in, and worst of all I couldn’t leave until they gave me permission to do so. Eventually, with advancing maturity, I developed better management skills and was able to cultivate a public persona that looked more like those of my peers. Speaking of peers, I wonder now how many of them were doing the same thing. Had they started earlier and gotten better at it sooner? Is it possible I wasn’t the only one?

The last day of school was one of the happiest days of my life. I had never looked back since walking out of that final classroom. And now here I was, more than forty years later, preparing for re-entry into the academic world as a college student. I’d given the matter quite a bit of thought over the previous year or two and, ironically, I’d decided to see if college might help me with the focusing issues I still had. I’d give it a good try, anyway, and if it didn’t work out, well, I’d try something different. There were no truancy laws for people over 60. Nobody was going to send me to the principal’s office or write a note to my mother. I’d taken a placement test and an interest survey, spoken with an academic advisor, applied for financial aid, signed up for my first semester, attended orientation, received a brand-new student planner, gotten a photo ID card.

At registration, I’d been told that based on my major, I had to take at least one math course. I had chosen Probability and Statistics; my own kids had taken it, and it sounded like fun. Ha! Had I ever before chosen a math course because it sounded like fun? On the other hand, was this one, in fact, too advanced for someone like me? I had scored very low on math skills in the placement test, but my advisor said I should be OK as long as I took the remedial course alongside the regular one. Together these two counted as a single course, possibly the last math course I would ever have to take - information that filled me with fervent hope.

It was the third day of class. Prob and Stats started at 8 a.m.; I had made a point of being early each day, and after the first day I wasn't even among the last people to be early. But once I was in my seat, I’d gotten absorbed in an assignment I was trying to finish for another class. I had one eye on the clock, but by the time I‘d put the other assignment away and gotten out my math notebook and pencil, the professor already had her projector up and running. Suddenly, I was lost.

I shuffled back and forth through the pages of the printed handout and scrolled down through the PowerPoint presentation on my computer screen, but while I hunted, the professor was rapidly moving on to the next point...and the next...and the next…

Long-submerged panic rose to the surface, bubbling up from forty years in the past.

Did you seriously think you had what it takes to succeed here?

It’s only the third day of college. Things are just going to get harder from now on.

Then through the panic, I became aware of another inner voice - a new, quieter, calmer one.

Just ask for help. Go ahead, raise your hand. Speak up.

What’s the worst that can happen?

It’s only the third day of college. It’s too soon to quit.

The professor stopped teaching and walked back to my desk. The students on either side of me leaned in to look. Together, the three of them helped me find the right page in the printed notes and scroll down to the current PowerPoint location. Then the professor said something that changed the rest of the day, and the rest of the year, for me.

"I'm sorry. I guess I was going too fast. You’re probably not the only one - I bet there are other students who are just as lost as you were. Thanks for speaking up."

She went back to her projector, and I cried. Not from shame because I'd been lost or had to ask for help, but because of what she didn't say: "You should have been paying better attention.”

The third day of college wouldn’t be the last time the Prob and Stats professor had to stop the class to help me find my place, or to repeat something I just couldn’t seem to understand. She continued to move fast, but she was patient with those of us who were slow to catch on, cheerful even on days when 8:00 a.m. found some of us a little sleep-deprived, always ready with clear explanations and a humorous example or two to fix in our minds a fact we would need.

To my own surprise, I didn’t drop out of college after the first semester. I went on to get my associate degree, then - still promising myself I could quit any time I wanted to - I took a deep breath and registered at a four-year university, with a bachelor’s degree in view. I’m majoring in Interdisciplinary Studies. As I often tell people, I haven’t quite decided what I want to be when I grow up, and I’ve discovered that that’s OK. And once in a while, I still get lost. Sometimes I even cry over an assignment. But at least now I know I’m not the only one.

I don't always have time to knit, sew, make pottery, play the mandolin or travel to countries where I don't speak the language, but there is almost always time for a story.

More stories from Barbara Bell and writers in Education and other communities.