Stop Saying That Bullying is Normal in School

by Lindsay Rae Brown 3 months ago in high school

School boards have done a great job of keeping kids safer at school, and we should be celebrating that. 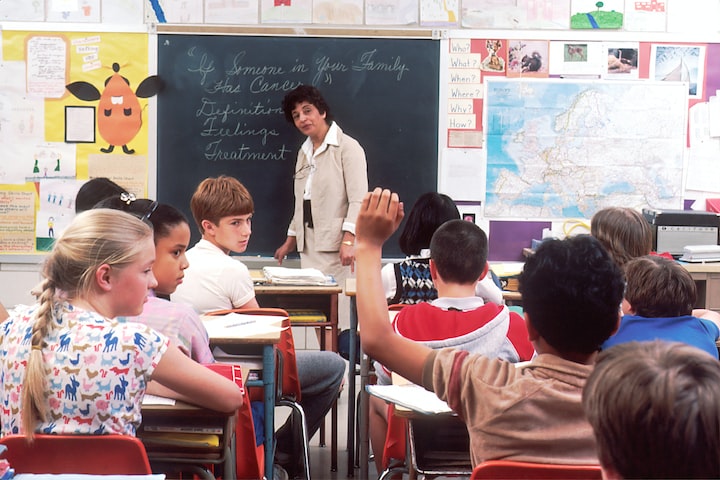 I am constantly amazed these days when I hear people complaining about Pink Shirt Day. They say things like, “Kids need to learn to stick up for themselves and stop being such little pussies.”

I suspect that the people shameless enough to call children “pussies” are probably also former school bullies themselves.

I think about the horror show, which was my teenage years and wonder how it has all changed so much in a matter of a mere decade and a half. How can schoolyard politics' fundamental language shift and transform so completely within the timespan of only a few generations? It doesn’t make sense, and yet, I am entirely thankful for the shift.

It was my first day of junior high, and my best friend Janelle told me that I shouldn’t be wearing my hair like that to school.

I had fashioned it into 30 small, tightly woven buns all over my scalp. So particular was I in my parting abilities, anyone could see the brilliantly white lines of my scalp from several yards away.

“I’m an individual, Janelle,” I told my friend, who was much cooler than me, as we walked up to the front doors of the school. I didn’t care what people thought of me. I just wanted, no needed, to express my individuality.

Janelle shrugged her shoulders and then plodded off to her homeroom as I headed for mine through the school cafeteria. And that is when I felt a strong hand on my shoulder, whipping me in the opposite direction.

“Who the hell do you think you are, doing your hair like that?” The voice was deep and uncharacteristically adult sounding, “You think you’re some punk, bitch?”

It was Deena. At least, I’m going to call her Deena because, to this day, I fear that if I use her real name and she reads this essay, she will track me down and perform unspeakable acts of torture upon my trembling body.

“No,” I replied, meekly. She had pinned me up against the cold brick wall of the school’s cafeteria while a plethora of teachers and students watched. Even the teachers were terrified of Deena. I knew I was going to receive zero help from anyone at this point.

“Well, you’re not a fucking punk. You’re a loser.” Deena shoved me to the ground, where I cowered but somehow willed myself not to cry. Not yet, at least. “You hear me? You’re a loser, and don’t ever let me see you with that hairstyle again!”

Then she was gone. After Deena was out of view, several kids rushed over to me, asking if I was alright while looking over their shoulder to ensure the girl was truly gone. The teachers walked off pretending to have seen nothing — as was the agreed-upon terms previously determined with Deena, I’m guessing.

I think of my children now and marvel at what they can get away with.

My son Lars is dramatic like me and sings and dances down locker clad hallways without ever even receiving the stinkeye from his school mates. He cries openly when frustrated in class and nobody bats an eye. Quite the opposite, actually, his outgoing nature and openness have actually made him more popular and likeable.

He has never once complained about bullies, which gives me pause because these actions would be a sure-fire target for bullies in my day and age. However, in my children’s school at least, things are far different than the learning academies of the 1990s.

A few weeks after Deena accosted me in the cafeteria, I was walking up to the school’s front doors again with Janelle when a skinny kid with a lisp came running up to us, “Did you guys hear, Deena’s up to her old tricks again!” He was panting heavily, and sweat was beading on his pimpled forehead.

“What do you mean?” I said agitatedly, looking around dubiously, worried Deena might be lurking behind the garbage can.

“She was beating up any kid who came close to her, and then she grabbed Gracey by the pigtails and threw her into a garbage can!”

I could imagine it all so clearly. Deena in a teenage rage, letting loose that guttural, animalistic wail not unlike the Hulk when in mid-transformation — assaulting any human body that came close to her.

“Well, where is she now, man!” I began screaming. I needed to avoid this enraged Deena at all costs — considering I was already on her hit list.

“Oh She’s gone now,” lisp-kid said, “Cops had to come and everything. That’s how bad it got.”

Although we did run into Deena in the years to come, we never saw her in school after that.

She would yell at my friends and me while driving in cars with her older boyfriends, calling us skanks as we walked down the street, ice cream cones in hand. We might catch wind in our older years that she had come to the same party we were at, and we’d find a small closet to hold up in until the coast was clear to get the heck out of there. But never again did she accost me about my hair, which was of some comfort, I guess.

Although my kids are still only in middle school, I have faith that they will not have to deal with this type of bullying.

At least I hope they won’t. Maybe it’s because we as a society have a better grasp on mental health issues for children. We have in school counselling and better communication skills between teachers and parents these days. Maybe there just aren’t as many bullies now, because we have more programs for troubled children. Or perhaps, kids are just nicer now than they were back then.

Another possibility is that my kids are simply worlds cooler than I ever was; thus, they do not have to deal with the bullying I had to endure.

Either way, I tell my children these stories of bullying as a wayward warning of the dangers of mean spirited play. I want them to know that it is okay to tell someone of authority if they ever do get bullied.

After I finish explaining to them the woes of my bullied teen years, they look at me with quizzical sorts of stares.

I tell them the truth and say, “Not really.” Of course, some adult figures would step in and stop the bullying if they came across it. But for the most part, we came from a generation that looked at bullying as making children stronger and more real-world-ready.

No wonder, so many of us have such severe mental health issues.

I look at the kind and generous characters of my children, and I am so grateful to be raising them in this day and age. A time when we dedicate days to eradicate bullying and educate the masses on the importance of our children’s mental health.

I’m not so removed from my youth to forget the isolation and fear that my schoolyard bullies caused. And I am so grateful for the programs that are in place today to discourage bullying in school settings.