Suns Out Books Out 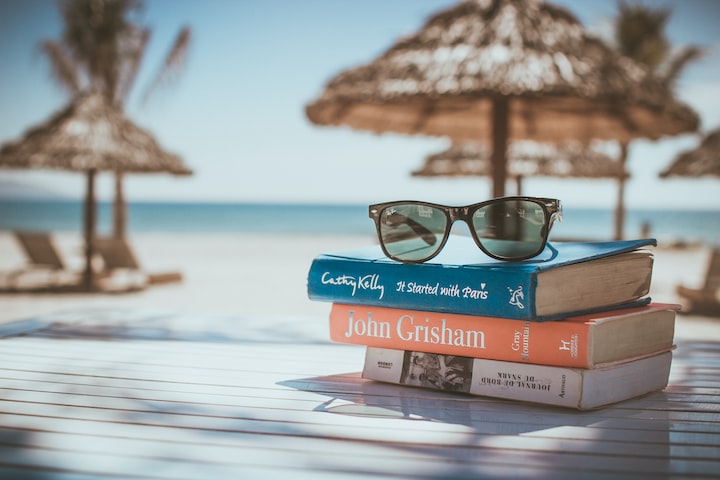 Photo by Link Hoang on Unsplash

It is nearing the end of summer so let us take a look at a few books that have made our summer in shutdown that much more bearable. These are some light-hearted, adventure filled books that just bring out the mood of the season.

Now to the shelves!

Bookishly Ever After by Isabel Bandeira.

A beautiful middle grade fantasy that really sets the bar high as we follow a book-loving, knitting master, sure-shot archer by the name of Phoebe.

She is of the mindset that book worlds are better than reality in every way and what book lover cannot relate? She develops a crush on a boy because he looks exactly like her fictional crush (hmm, sounds familiar) and decides to follow the book romance in order to win his attention.

On this messy journey through high school we see the geeky side kick best friends, the popular cheerleaders and ego-filled jocks, not to mention a slight dose of over the top theater kids.

In other words, a deep dive into the stereotypical high school experience that will never be forgotten. In her journey she realizes that the reality and the fictional character are not one in the same. She will come to grips with who she is as a person and that maybe reality does have its advantages.

A beautifully drawn contemporary graphic novel with a light story line that draws you into the spirit of the fall season, filled to the brim with lots of yummy foods, crazy games, and a runaway goat.

We follow best friends Deja and Josie who are spending their last autumn in the pumpkin patch together. Josie has a crush on a girl he hasn't even talked to and imagined in his head.

Thus the entire plot line is him trying to get to her in time to let her know how he feels before he goes away to college. Will she be everything he imagines or will he find he was looking for love in all the wrong places?

A light-hearted contemporary novel with two boys falling in love and learning how to come to terms with those feelings.

Charlie is going through life one day at a time until he is introduced to Nick who is in the grade above him. Nick sees Charlie getting bullied and steps in to defend him.

This was the first event that sparked an attraction toward each other as friends. They continued to talk and open up about each other and their pasts.

Nick started to realize that he was developing feelings for Nick but did not know how to express that to himself nor to his family. Not to mention, he did not like guys. Right? He had a girlfriend.

Will he admit to himself that he likes this boy? Will he act on those feelings? Read the book and find out.

This is a YA contemporary novel with a bunch of high school shenanigans, mysteries that need to be solved, and a graduation to attend.

We follow a boy by the name of Quentin and his journey with discovering is not everything is as it seems, even himself. It is near the end of his high school career and he has finally gotten to talk to the one and only school legend, Margo Roth Spiegelman.

She had created a life for herself within the school but that is not the person that she was. She saw something in Quentin, a boy who used to be her best friend, and wanted to use this last moment of their high school lives to show him what he had been missing all along.

After a night of partying and pranking Margo disappears leaving Quentin feeling lost. He thought he has gotten somewhere with her but in the end she was still an intangible thought of a person that could not be contained.

He would not let her disappearance go and searched for clues to find her.

If you want to know how it ends you have to read more and find out!

Simon vs the Homosapiens Agenda by Becky Albertalli.

This is yet another YA contemporary novel with weird conversations, cringe references, and hormonal high schoolers.

We follow a boy named Simon as he tried to navigate through high school without the secret that he is gay spreading to everyone. One night his close friend, Leah, told him that there was a gay kid that went to their school when she found it on the school gossip site.

Sure enough, there was an email from an anonymous user by the name of Blue. He used an anonymous email username, Jaques, to reach out to him.

They start to converse and he tries to search for this person using all the clues through the emails. Throughout all his trying he comes up short. During that time, he was outed by someone.

He was now looked at all the time and he had enough. He sent out an email to the entire school that he was still the same person, now everyone knew everything. He addressed Blue, who had remained silent, that he would be waiting for him and where.

Does Simon ever find out who Blue is? Will he get a happy ending? You will have to read to find out.

I hope you enjoyed these end of summer book recommendations. These are many of the books that I have found enjoyable as well as light in content. If you do want to own any of these books for yourself I have put a special link in all of the titles so feel free to take advantage of that.

I hope you all have enjoyed your summer!

I will be posting a little more of what I have been doing, reading and of course watching in upcoming articles so please do stay tuned.

As always thank you for reading! If you would like to follow my bookish/writing journey you can click here. And of course if you would like some more recommendations I have an article written of authors that I have enjoyed throughout all of my childhood.

See all posts by Just A Girl Who Loves Books →