How did Albert Einstein Spend His Leisure Time?

by Areeba Merriam 8 months ago in stem

Practice these habits for maximum productivity of the brain 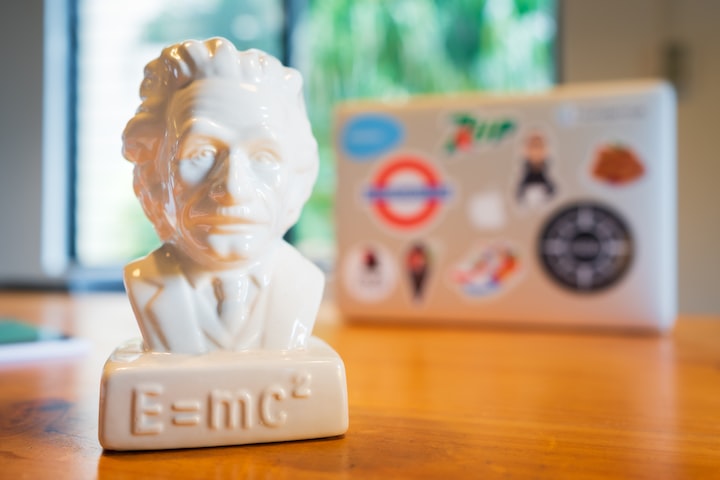 Photo by Slidebean on Unsplash

Albert Einstein (1875–1955) is considered as the most influential and recognizable scientist of the 20th century. He presented the theory of relativity which changed our prior concepts regarding space and time. This theory now serves as one of the two pillars of modern physics, the other one being quantum theory.

Albert Einstein was a hard worker, besides the hard work he always used to take some time off. He worked for ten hours a day, six days a week. Also, he had the immense capability to focus on work for extended times. He used to say,

"Keep in mind that besides the eight hours of work, each day also has eight hours for fooling around, and then there's also Sunday." - Albert Einstein.

He was of the idea that busy people can never do wonders in their life, something great happens when a person is relaxing. Taking some time off provides a vital escape from the laborious life, a scientist has. Staring up at the sky, hiking above the mountain, walking across the sea are some tranquilizing practices. He once said,

"I have no special talents. I am only passionately curious."

I will highlight some of the unusual patterns in Albert Einstein’s life and his exercises to relax his mind to magnify the productivity.

It was perceived by his close acquaintances that if the career of being a scientist had not worked out for him, he could have been a world-class violinist.

Playing an instrument could be a wonderful exercise for the brain. It enhances cognitive skills, time-management skills, concentration, and creativity, as it uses every part of the brain

His wife Elsa said, "He goes to his study, comes back, strikes a few chords on the piano, jots something down, returns to his study."

It’s a well-known fact that sleep is good for brain activity. In the case of Einstein, this time scale was meaningful, as his special theory of relativity came to him during his dream. Einstein had a dream about an elevator falling in space and also that he was near the mountainside, going so fast that eventually, he was close to the speed of light. The stars and other objects in his dream changed their appearance at that moment.

He awoke and meditated on this dream. Soon he formulated a theory which is among the most beautiful scientific theories in the history of science. That changed humanity’s perspective on space, time, gravity as well as the mechanics of the universe.

A lot of scientists claim that they can do lucid dreams (conscious while being dreaming), which helps them in visualizing science.

On-campus, when he would come up with an idea, he would enter the nearby classroom and traces out the equation about the recent thought on the blackboard. Then he would discard the work and continued the walk.

Apart from fitness, walking can distract a brain in a way that can boost memory and problem-solving skills. It provides a different approach to our thinking, sometimes may lead to potential you don’t have at your working place. As quoted by Einstein “we can’t solve problems by using the same kind of thinking we used when we created them.”

He always wrote back the mails filled with encouragement and humbleness.

An exceptional thought that revolutionized the science that space and time were curved, came to him when he was out on the water. He wrote to a mathematician Oswald Veblen in a letter in 1930 that,

To reveal the secrets of nature — we need to get away from our daily life routines — to behold the vastness of the universe.

He was extremely proud of the fact that he didn't have to wear them while giving lectures at Oxford in the 1930s.

Nowadays, we live in a world that appreciates overdoing and overworking. Because of this frame, people try to do as much as possible while burying their inner selves. They create unrealistic expectations about their to-do list. These superhuman endeavors lead to stress, disappointments, and depression.

Enjoying one's own company, dating one's own self, and solitude is very important to discover insightful solutions to the problems. It enhances our output and decision-making skills in everyday life.

If we look back at history, there is a list of great thinkers, leaders, and scientists who commonly sought solitude to shape their thinking. Leonardo Da Vinci, Martin Luther King, Nikola Tesla, and Ernest Hemingway are few of them.

The genius spent his final years of life doing what he wanted to do - working on the unified theory (the theory of everything), sailing, and enjoying life. On his 75th birthday, he received a parrot as a gift, he loved talking to him and telling him jokes.

He was not only an intellectual but also a philosopher and a humanitarian. He is known as the father of modern physics and was called "the greatest Jew alive."