by Guntaas Kapoor about a month ago in Sustainability 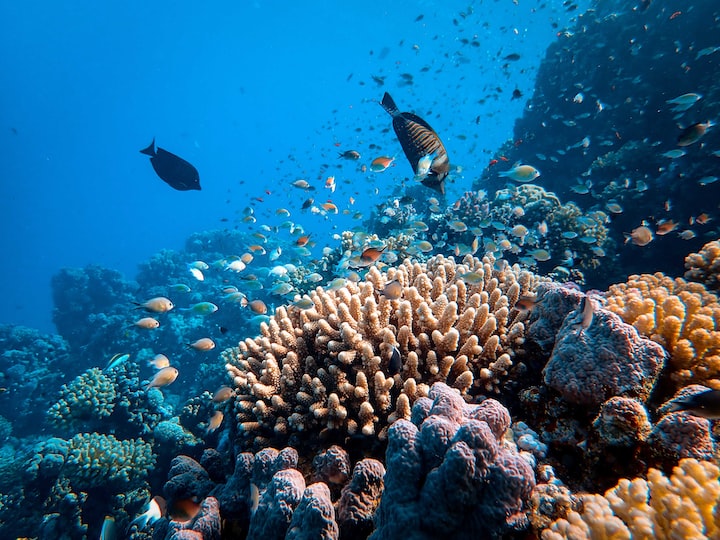 Photo by Francesco Ungaro on Unsplash

What are Coral Reefs and how are they important to us?

A coral reef is an underwater ecosystem characterized by reef-building corals. Reefs are formed of colonies of coral polyps held together by calcium carbonate. Most coral reefs are built from stony corals, whose polyps cluster in groups.

Sometimes called rainforests of the sea, shallow coral reefs form some of Earth's most diverse ecosystems. They occupy less than 0.1% of the world's ocean area, about half the area of France, yet they provide a home for at least 25% of all marine species, including fish, mollusks, worms, crustaceans, echinoderms, sponges, tunicates and other cnidarians. Coral reefs flourish in ocean waters that provide few nutrients. They are most commonly found at shallow depths in tropical waters, but deep water and cold water coral reefs exist on smaller scales in other areas.

Coral reefs deliver ecosystem services for tourism, fisheries and shoreline protection. The annual global economic value of coral reefs is estimated between US$30–375 billion and US$9.9 trillion.

The Present Situation: An Important Ecosystem At Risk.

Coral reefs have declined by 50% since 1950, partly because they are sensitive to water conditions. They are under threat from excess nutrients (nitrogen and phosphorus), rising temperatures, oceanic acidification, overfishing (e.g., from blast fishing, cyanide fishing, spearfishing on scuba), sunscreen use, and harmful land-use practices, including runoff and seeps (e.g., from injection wells and cesspools).

Human impact on coral reefs is significant. Coral reefs are dying around the world. Damaging activities include coral mining, pollution (organic and non-organic), over fishing, blast fishing, the digging of canals and access into islands and bays. Other dangers include disease, destructive fishing practices and warming oceans. Factors that affect coral reefs include the ocean's role as a carbon dioxide sink, atmospheric changes, ultraviolet light, ocean acidification, viruses, impacts of dust storms carrying agents to far-flung reefs, pollutants, algal blooms and others. Reefs are threatened well beyond coastal areas. Climate change, such as warming temperatures, causes coral bleaching, which if severe kills the coral.

What you can do to protect Coral Reefs?

Let's unite and save our Underwater Treasures

The Coral Reef Alliance (CORAL) is a non-profit, environmental NGO that is on a mission to save the world’s coral reefs. It works collaboratively with communities to reduce direct threats to reefs in ways that provide long-term benefits to people and wildlife. In parallel, CORAL is actively expanding the scientific understanding of how corals adapt to climate change and is applying this information to give reefs the best chance to thrive for generations to come. Their broad expertise uniquely positions them to rally the conservation community around scalable and effective solutions for coral reefs around the world.

Your donations/contributions will be highly appreciated. Kindly click on the link below if you wish to donate and be a part of the mission to save the world's Coral Reefs.