by A B Forbes 7 days ago in Science
Report Story

Where did our only natural satellite come from? 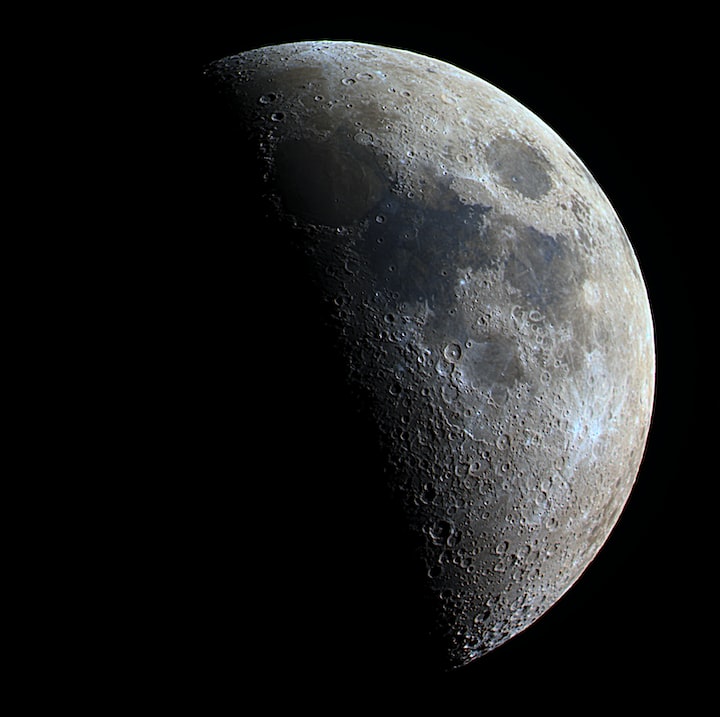 Photo by Guillermo Ferla on Unsplash

Most Scientists agree that our Moon came into existence about 4.5 billion years ago.

It formed from ejected material thrown out into space when a planet roughly the size of Mars collided with the young Earth. It is also thought that the collision is the reason the Earth is tilted on its axis by over 23 degrees, this tilt is responsible for the different seasons we witness on our planet each year.

After all the ejected material came together the Moon ended up being 3,474 kilometres in diameter.

The young Moon was a lot closer to the Earth back then, orbiting at an estimated distance of 20,000 to 30,000 kilometres from the surface of our planet, today the distance between the Earth and Moon is 384,400 kilometres. If mankind had been around then can you imagine how big the Moon would have looked in the night sky?

At present, the Moon continues to move away from the Earth at 3.6 centimetres per year, which is roughly the speed your fingernails grow, in an average human life that would be a distance of over 2.5 meters, which doesn't seem much, but it shows how the kilometres would add up over millions or billions of years.

If we had no Moon, our day would be roughly 6 hours long, the effect the Moon has had on our tides has slowed down the Earth’s rotation over billions of years. And if there was no moon, the rise and fall of our tides would be significantly less, leaving only the gravity of the Sun to pull at our oceans.

The largest tides occur when the Earth, the Moon and the Sun are in alignment and both the Moon and Sun’s gravity are pulling at our oceans at the same time. Without the Moon, the evolutionary path for life on Earth may have been very different, we humans might have never existed.

On May 25, 1961, American President John F Kennedy announced the ambitious goal of sending men safely to the Moon and back, he said it would be achieved in less than ten years, but sadly he was not there to see it happen within his estimated time scale.

I remember driving home one evening in July 1969, parking my car in the dark countryside and looking up at the Moon, it seemed so bright that night, I was amazed that two men had landed safely, left their spacecraft and were walking on the Moon’s surface.

I felt so proud of humanity and so privileged to have been born at the right time to witness and understand that great event.

Three men made that journey, Michael Collins flew the command module Columbia, and he stayed up there orbiting the Moon while Neil Armstrong and Buzz Aldrin made their way to the surface in the lunar module Eagle. It must have been a very long day for Michael, his biggest fear was the real possibility of going home alone.

A moon is a natural satellite that can orbit planets, dwarf planets and surprisingly asteroids as well. Counting all the planets in the Solar System, they have altogether 205 confirmed moons. Not counting shepherd moons the smallest of them all is Deimos, a moon that orbits Mars, its diameter is only 12.4 kilometres.

Unlike Mercury and Venus which have no moons, planet Earth has one moon. Mars has 2 moons, Jupiter has 79, Saturn has 82, Uranus has 27, and the most distant planet Neptune has 14 moons.

Do you find my articles interesting and educational? if you do then please follow the link for more. Regards.