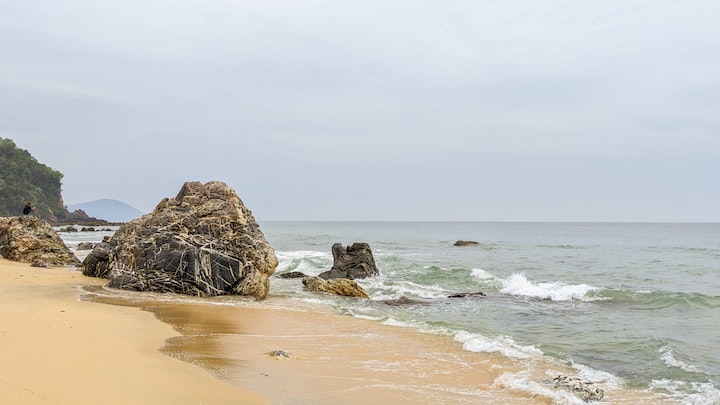 Photo by Farhan Azam on Unsplash

I was lucky to have been born next to the sea in a small village in the country of Scotland. For many years beachcombing was an interest of mine.

Over the years I have come across many interesting objects washed up on the shoreline. A few of those objects were stones that were riddled with holes. I decided to find out the reason for these strange-looking stones.

Amazingly, the holes are made by the Common Piddock (pholas dactylus). They're part of a family of bivalve molluscs similar to a clam. Their shells are wonderfully adapted for grinding the rock with strong teeth at one end.

The round holes are due to the rotating motion of the piddock as it makes its home. Over time, the piddock becomes larger than the entrance hole, imprisoning the animal for life. When the piddock dies, other animals will use their empty burrows as a home or shelter.

Evolution never fails to amaze me.

A pastime handed down.

The seashells in the picture are small cowries. (Trivia Artica)

I live in a small village in North East of Scotland. For generations, people of all ages have collected these small shells on certain areas of the beach. They are far from plentiful, but if you have the patience and look long enough, you will end up with a few. Surprisingly collectors get a lot of satisfaction when one is found.

I have never seen a live one. maybe they live farther out than the lowest tidal areas.

Locally we call them Johnny Groats. When I was young almost every household had a jar of them on display, often on the windowsill. It was thought they were lucky; it was said that if you had a Johnny Groat in your purse, it would never be empty.

I still have a jar of them on display that I collected with my father over 60 years ago. Good memories.

One day while walking on my local beach these unusual objects came into view.

From a distance my first thought was “coconuts” but that was silly, coconuts in Scotland, I don’t think so.

On inspection I found them to be very dense and their spherical shape was almost perfect, the largest of them measured 25 centimetres or 10 inches across.

I have lived by the sea all my life and have come across the odd one, but never so many of them in one place, therefore a little research was needed.

I found out that they are known as Neptune balls. Under certain tide and wind conditions, seagrass and other fibrous material on the sea bed can be shaped into balls, then the waves carry them ashore to be left stranded on the high water line.

I read that Neptune grass is very common in the Mediterranean sea, therefore it is not unusual to see these balls washed up on the beaches there.

End of the main article

My articles are mostly about space and life, you can see them if you follow the link. Regards.

We can only imagine what our early ancestors were thinking as they gazed up at the night sky, were they curious as to what the heavens had to hide?

Now it is very different as we have developed sophisticated telescopes and other specialised scientific instruments that are helping to reveal some of the secrets the Universe holds.

Simple life forms were living on our planet almost 4 billion years ago, since that time billions of animal species have existed, and millions of species are still alive today.

The evolutionary path for life has been long but at last, we have arrived. Our highly developed brain has given us intelligence and curiosity, now we can try and make sense of our existence.