Come and join me on a fictional journey to the far reaches of space. 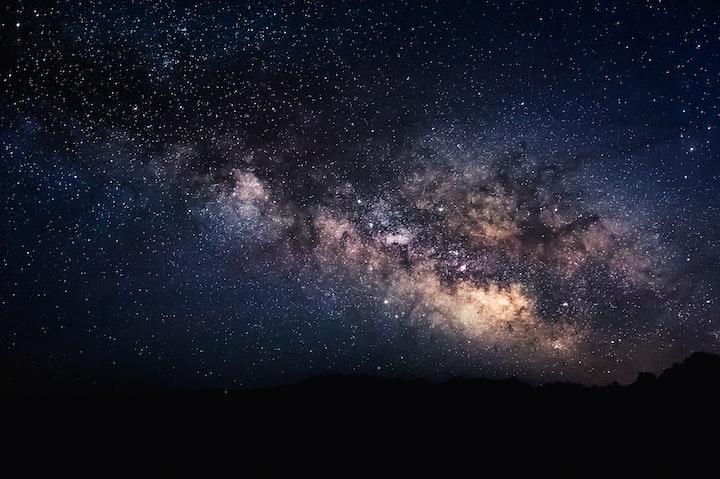 Photo by Cosmic Timetraveler on Unsplash

To make sense of my story and obtain the best knowledgeable experience, please follow the link and read part 1 first.

Mercury is the smallest of the four rocky inner planets that orbit the Sun, being just 4,880 kilometres in diameter. It’s positioned closest to the Sun at an average distance of almost 58 million kilometres.

The other four planets in the Solar System are the gas giants and they are much more massive and more distant.

Mercury is thought to have formed much farther away from the Sun than its present position. Like the other planets, it has an elliptical orbit, which is an oval-shaped path.

Mercury can be as close as 47 million km and as far away as 70 million km from the Sun.

The nearer an object orbits a star the faster it travels, therefore among all the planets, Mercury orbits the Sun the fastest, speeding along at just over 170,000 kilometres per hour, and takes just 88 Earth days to complete one solar orbit, also known as the mercurial year.

A sidereal day on this planet is very long, which is due to its very slow rotation speed, taking over 58 Earth days to complete one turn on its axis.

A solar day is different, look at it this way, it can be the time it takes between two noons when the Sun is at its highest point in the sky, on Earth the difference between a sidereal day and a solar day is only 4 minutes but Mercury has a solar day which lasts for 176 Earth days, making it the longest solar day of any planet in the Solar System.

Imagine this impossible scenario, if you could stand on the surface of Mercury and look up at the Sun you would have to wait 176 Earth days before the Sun came back to the same position in the sky.

The gravity on Mercury is just over one-third of that on Earth, and having almost no atmosphere its surface has no protection from the Sun’s rays or incoming cosmic missiles.

Mariner 10 was launched from Nasa’s Kennedy Space Centre on November 3, 1973, and became the first spacecraft sent to visit Mercury, making its first flyby of three on March 29, 1974.

Nasa’s Messenger spacecraft was next to visit, it left the Earth at the start of its long flight on August 3rd 2004 and entered orbit around Mercury on March 18, 2011, becoming the first spacecraft to circle the planet. The mission terminated with a controlled impact on the surface of the planet on April 30, 2015.

The surface was found to be dry and harsh and covered in ancient craters, the largest being the Caloris Basin measuring 1,550 km in diameter, it is thought to have been caused by an asteroid 100 km wide which slammed into Mercury around 4 billion years ago.

Mercury has no moons.

Orbiting the Sun so close makes Mercury difficult to see from the Earth, the best time to view would be for a short time during sunset or sunrise when the Sun is out of sight under the horizon.

The Bepi Colombo is a European-Japanese mission that has sent a spacecraft to Mercury, there are two orbiters fixed together, and once they arrive at their destination they will separate and go into different orbits around the planet.

The mission will perform a comprehensive study of the planet for at least one year, maybe more. The two orbiters were launched on an Ariane 5 rocket on the 20th of October 2018, from that date we will have to wait seven years for them to arrive at their destination, that length of time is due to the long and complicated flight path, the spacecraft will have one flyby of the Earth, two flybys of Venus and six flybys of Mercury before it finally achieves gravity capture at Mercury on December 2025.

Venus was named after the Roman goddess of love and beauty, it is sometimes called the Earth’s sister planet and is positioned second closest to the Sun, this planet has an average distance of just over 108 million km from our local star.

It is also the second brightest object in the night sky, our Moon being the brightest. Venus is a little smaller than the Earth having a diameter of 12,100 km and a mass of 0.8 of the Earth. It takes just over 224 days to complete one orbit around the Sun which is known as a Venusian year.

Surprisingly, a day on Venus is longer than its year, taking 243 Earth days to complete one turn on its axis. Another strange thing about Venus is that it turns on its axis in the opposite direction from the rest of the planets in the Solar System, this means that the Sun rises in the west and sets in the east.

The first successful mission to Venus was Mariner 2 which was launched in August 1962, it passed Venus on December 14, 1962.

As of this date November 2022, a considerable amount of information has been gathered from the 43 space missions from various countries that have attempted the journey, just over 20 of the missions were successful. The surface was found to be covered with craters, volcanoes, mountains and big lava plains.

It is so hot on the surface that temperatures can reach 465 degrees Celsius, hot enough to melt lead. It has a thick heavy atmosphere stretching up 80 km from the surface and is made up mostly of carbon dioxide and sulphur clouds, which trap the heat below causing a greenhouse effect.

Atmospheric pressure is over 90 times and the gravity is 0.9 of that on Earth. It was found to have a very weak magnetic field, probably due to its very slow rotation speed.

It is believed that billions of years ago Venus had a climate similar to that on Earth, with large amounts of water on its surface, however, the high temperatures produced by the greenhouse effect have boiled off the water, leaving the harsh conditions that we see today.

Our beautiful world the Earth is the third closest planet to the Sun orbiting at a distance of 149.6 million km. Earth’s diameter is 12,756 km with an average temperature of 16 degrees Celsius.

The reason that life as we know it can live on this magical planet is because it is the right size and that it orbits the Sun at the perfect distance which is called the goldilocks zone or habitable zone, this area in space ensures that it is not too hot, nor too cold, liquid water exists in this habitable zone which is needed for all forms of life on our planet.

Like everything else in the Cosmos Earth has a lifespan that will end naturally sometime in the distant future, but in the meantime, I hope that mankind will treat our only home with respect for the sake of ourselves and all the other living things that share our planet.

The Earth is roughly 4.5 billion years old, just a little younger than the Sun. Gravity has pulled most of the heavier elements like iron and nickel down into its core with the lighter elements staying at the surface and forming the crust.

Due to its massive molten iron core and its rotation, a magnetic field was created around the Earth and that magnetic field has protected our planet ever since, it deflects most of the solar wind whose charged particles would otherwise strip away the protective ozone layer, which protects the Earth from ultraviolet radiation.

It took a long time for the molten Earth to cool down from its violent birth, but as it cooled these new conditions allowed the first rain to fall from the sky, which began forming the oceans we see today, some think that incoming asteroids and comets also contributed to the water in our oceans and lakes.

Around 3.5 to 4 billion years ago some elements came together in the oceans and formed the key substances which would eventually make up all forms of life.

Fossil Stromatolites have been found in western Australia dating back 3.5 billion years, their columns were constructed by Cyanobacteria a single-cell photosynthesising microbe. That was a game-changer for the development of life because they produced the by-product, oxygen, which slowly accumulated in our oceans and in the atmosphere, eventually leading to a big leap in animal evolution and diversity.

However, it must be said that it is not yet fully understood how primitive life got a start.

Our early ancestors existed in Africa six million years ago, and modern man, known as Homo Sapiens, have been around for over two hundred thousand years. Civilisation as we know it has existed for six thousand years.

Now we are here at the top of the tree of life, some animals have evolved to be stronger, larger and faster than we are and some can fly, but what sets us apart is that we have developed the most advanced brain, and therefore the intelligence, curiosity and the ability to do the science which is providing a better understanding of the Universe.

Carl Sagan, who was my favourite astronomer and presenter is quoted as saying, “The human brain is a very big place in a very small space” which is so true. He is not with us now but I can still hear his distinct voice.

A moon is a natural satellite that can orbit planets, dwarf planets and surprisingly asteroids as well. Counting all the planets in the Solar System, they have between them 205 confirmed moons. Not counting shepherd moons the smallest of them all is Deimos, a moon that orbits Mars, its diameter is only 12.4 kilometres.

Among all the moons in the Solar System, Jupiter’s moon Ganymede is the largest by far. Including the Sun it is the ninth largest object in the Solar System, surprisingly Mercury is smaller than Ganymede. Unlike Mercury and Venus, planet Earth has one moon. Mars has 2 moons, Jupiter 79, Saturn 82, Uranus 27, and the most distant planet Neptune has 14.

Earth is such a lovely place, it is highly unlikely but could it be possible that it is the only planet in the entire Universe to harbour intelligent life? With an estimated two trillion galaxies, each one holding billions of stars and planets, what would be the odds against there being no other intelligent life in the rest of the Universe? Surely, by sheer numbers, billions of planets will have similar conditions as that of the Earth, with the possibility of life existing. Perhaps sometime in the future, that question about life on other worlds will be answered.

Continental drift, or plate tectonics, is the movement of the Earth’s outer shell which is divided into several plates that glide over the mantle, which is the rocky inner layer above the Earth’s core.

It is speculated that one of the earliest supercontinents was Vaalbara, which is thought to have started forming around 3.5 billion years ago. There is better evidence for the existence of Rodinia which started breaking up around 750 million years ago.

The most recent supercontinent was Pangaea, it formed around 300 million years ago and began breaking apart 175 million years ago, what is left are the continental landmasses that we are so familiar with today.

My story "Our Space Journey" has 16 parts.