Navratri and Its Spiritual Significance

by Monica Stefan about a month ago in Humanity
Report Story

The nine-day festival of India 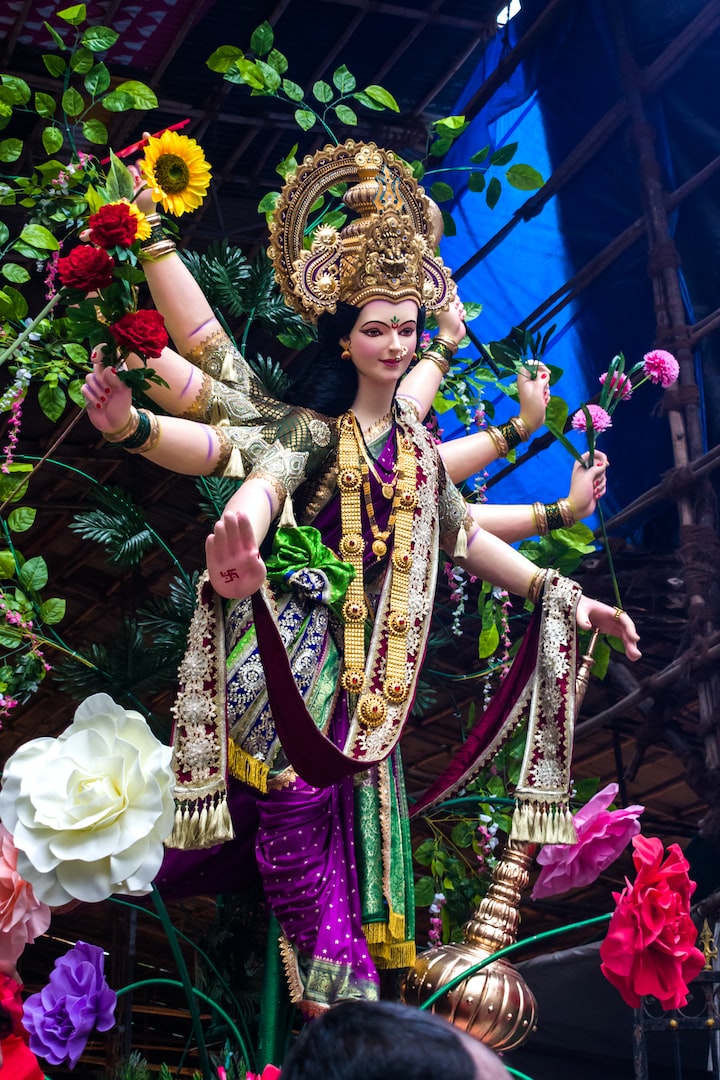 Photo by Sonika Agarwal on Unsplash

Navaratri which means nine nights — is an Indian festival that celebrates the Divine Feminine. The nine nights symbolize being born again like an unborn baby, who takes nine months of gestation to develop and grow in the mother’s womb. These nine days are dedicated to seeking rest to rejuvenate one’s mind, body, and soul.

Mahishasura and his Boon

According to legend, there lived a demon king, Mahishasura. He was powerful and ambitious. He wanted to rule over the entire universe. But he knew that to succeed in his endeavors, the demons needed to gain power over their bitter enemies, the gods.

Mahishasura prayed fervently to Brahma (the creator of the universe). After years of penance by him, Brahma was finally pleased and offered him a wish.

Brahma said, “Tell me, what do you want and your wish shall be granted.”

“I want to become immortal.” The demon king said.

Brahma replied, “It is not possible. Whoever is born must die. Ask for anything else, and it will be yours.”

“Grant me a boon that no man or god can ever kill me,” replied Mahishasura thinking that he had fooled Brahma into giving him exactly what he desired.

“Your wish shall be granted,” said Brahma and he disappeared.

Indra, the king of the Gods, pleaded with the Trinity power of the universe (Brahma-the creator, Vishnu -the preserver, and Shiva -the destroyer) to help the gods. The Trinity obliged.

The gods waged a war on Mahishasura with the help of the Trinity, but due to Lord Brahma’s boon, nobody was able to defeat him. As a result, the gods lost the battle.

The Trinity then gathered together to find a way out. Mahishasura’s boon safeguarded him from humans and gods, but there was a catch. In his ignorance and vain, he had forgotten to ask for immunity from women. It was unimaginable for him that a woman could challenge him for battle, let alone defeat him. So, the only way the demon king could be killed was at the hands of a woman.

The Trinity (Brahma, Vishnu, and Shiva) combined all their powers together to give birth to Durga, the female god. She was both beautiful and fiercely powerful. All the gods presented her with clothes, jewelry, and weapons to successfully vanquish Mahishasura.

The Battle that raged on for nine days

Goddess Durga demanded Mahishasura to confront her in battle. Hearing this, the demon king laughed. But when he saw her, he was bewitched by her beauty and asked her to marry him.

The goddess, of course, refused, and war broke loose. She fought the demon king bravely for nine consecutive days during which he kept changing his shape to become different animals and misled her. On the ninth day, when he transformed into a buffalo, Goddess Durga struck him with her trident and killed him. These nine days and nights of battle gave rise to the tradition of celebrating Navaratri.

The spiritual significance of Navtaras

The defeat of Mahishasura is not only a symbolism of the triumph of good over evil but also that of man’s higher nature over his ignoble instincts. The tenth day after the battle is celebrated as Vijayadashami or Dussehra.

In some parts of India, people play Garba and Dandiya at night. Garba is a dance form in which men and women adorn colorful clothes and dance in a circle. This form of dancing involves clapping with both hands as the dancers move and turn around in circles with and around their dancing partners.

In Dandiya, instead of clapping, people use wooden sticks held in both hands to strike each others’ sticks.

The fast has a deeper meaning to it. It is connected to a spiritual reason.

Devotees observe fast for these nine days. This is a time for meditating and reinvigorating and getting body and mind purified.

Overall, this nine-day festival is meant to give everyone an opportunity to look within.

More stories from Monica Stefan and writers in Earth and other communities.