We Tell No One

by Kat Morris about a month ago in fiction 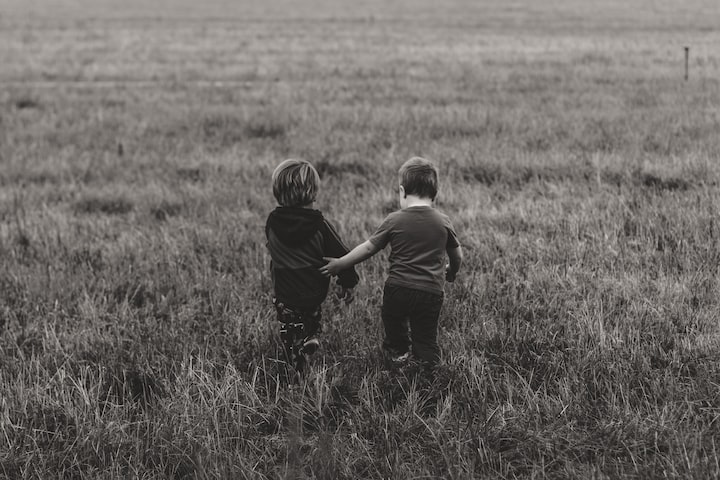 Photo by Kevin Gent on Unsplash

Malcolm’s voice broke through the static, forcing Richard to look up like a deer in the headlights. It was laughable, how much of the therapist stereotype Malcolm looked, dressed in his army-green cardigan, disheveled black curls peppered with grey, and slumped shoulders that carried the weight of everyone’s demons and denials.

‘Let’s begin,’ said Malcolm, turning the tape recorder on. It was old-school, he knew, but he preferred taking notes in this way, by writing it down after the session.

Richard pursed his lips as he waited for more uncomfortable questioning from gentle calm Malcolm as he tried to unlock the doors in Richard’s mind, ones he’d kept padlocked with chains since childhood, until now.

‘Ian’s being released today,’ said Malcolm. He sat down in his blue armchair and crossed his legs. ‘How does that make you feel?’

‘Angry?’ Malcolm repeated skeptically. ‘I sense fear here.’ Malcolm’s puffy eyes narrowed, as if this would make Richard’s thoughts clearer and force them to trickle out. ‘Do you feel frightened, Richard? Perhaps of what you’re angry with? Or maybe you’re afraid of the anger itself.’

‘I’m not scared of anything,’

‘Everyone’s afraid of something.’

‘What makes you say that?’

Richard sat back on the coffee-colored sofa and placed his fingers over his mouth, as if this would stop the words from coming out. For a while there was nothing, just padlocked doors and black holes, eerie silences, then–

‘I think of Ian in a prison cell,’ said Richard, his voice deep and muffled by his hand. The room was silent except for the scratching of Malcolm’s pen against the paper as he made notes. ‘I imagine the bars squeezing in on him.’

‘Do they crush him?’ Malcolm asked. Richard shook his head as he watched the pen float across the page. ‘Just close in. OK.’

‘I wonder what it’s like, to live your life behind bars. Caged like an animal. I remember seeing a bear once, a cub, in this tiny enclosure at the zoo. Pacing up and down, up and down, squealing. I didn’t like it.’

Richard gave Malcolm a hard stare. He could see Ian again, trapped in a cage. Red hair, freckles and grey eyes peering out of the solid iron bars. He could see his mother’s black eyes, hooked nose and heart-shaped face.

‘Where are you now, Richard?’ Malcolm’s question made the red-haired child Richard recalled evaporate.

Richard stuck his tongue into the corner of his mouth. He could feel a lump near his jaw. He rolled his tongue over his teeth and was reminded of when he and Ian were six years old and both had to have braces fitted. Their mother wouldn’t even look at them as they slurped soups for the first few weeks of wearing the metal braces over tender gums. She’d whack Ian around the head each time he slurred his words, and Richard remembered flinching at her voice as Ian’s hair flew up like flames after each blow. Her favorite form of abuse was to whack a wooden spoon against the back of their legs until they were red-raw. Thwack!

‘Are you angry at the injustice?’ asked Malcolm, but to Richard, the question sounded more like an accusation. ‘He murdered your mother.’

‘I let him down. He always protected me. I should have – have done more.’

‘Why do you feel responsible? You were a kid.’

‘He was my big brother.’

‘I haven’t seen him in thirty-five years.’

Richard bowed his head and rested his elbows on his knees. He closed his eyes as his mind drifted.

‘What do you want from this session?’ said Malcolm. His voice seemed louder. Perhaps it was because the room was so quiet. No traffic outside, no children screaming or laughing. Nothing. It was like the world had stopped. The room seemed smaller, somehow. Darker. Like there was too much furniture around Richard, too close to him. He put his hands on the back of his neck and tried to push the feeling that the walls were closing in on him out of his mind.

‘Switch it off,’ said Richard. ‘My head. I want to switch the thoughts off. How do I do that?’

‘You think about your family a lot, don’t you?’ said Malcolm, nodding. ‘Especially Ian. Why do you think that is?’

Richard shrugged his shoulders. ‘ I feel like a monster.’

‘Because I – my mother was spiteful. I – my wife doesn’t get it but – I worry about Ian all the time–’

‘Despite what he’s done,’ Malcolm interjected thoughtfully. ‘He’s your brother. You love him. Nothing will change that. You can love and hate someone at the same time. You can love them and hate what they did. Sounds to me like you’re punishing yourself for being confused. For being human. I’m going to say something now, and I want you to tell me how it makes me feel. You’re not responsible for Ian’s actions. You didn’t kill your mother. Ian did.’

Richard diverted his gaze from Malcolm and looked down at the right leg of the coffee table. There was a chip in it. It bugged him. That tiny, single missing piece from an otherwise flawless mahogany leg. Why? Why was the leg chipped? How did it happen?

‘Richard?’ Malcolm said. Richard looked up at him. He had the feeling that Malcolm had been trying to get his attention for a while.

‘That’s OK, take your time,’ said Malcolm gently. ‘Today is your last session. How do you feel about that?’ Richard shrugged his shoulders. ‘OK. I understand today is a difficult day. Doesn’t mean you’ve regressed in any way. We’ve talked about how grief is a process.’

‘I don’t mean for your mother. I think you’re grieving for Ian. His life, his childhood. You need to let go of that guilt, that responsibility.’

The men stared at each other for a while. To Richard, it was a very long time, but his sense of time and what was and wasn’t real had been warped for years. He wanted to get out of this room, away from Malcolm’s watchful eye. He wanted to undo the top button of his shirt, open a window, fill his lungs with air, stop the walls from closing in. He sank his nails into the fabric of the sofa.

‘Remember to keep practicing grounding yourself. She can’t hurt you anymore,’ said Malcolm.

‘Can you be a good person if you do something terrible?’ Richard interjected.

‘Define terrible,’ Malcolm shot back. Richard had not expected a quick response. He stared at the therapist for a while, who was making more notes in his book. The bags beneath Malcolm’s eyes looked darker today. Richard wondered if his therapist ever slept, or did the secrets and sins of his patients keep him up at night?

‘Murder,’ Richard whispered. His eyes landed on the desk behind Malcolm’s armchair, but he couldn’t see it, not really. All he could see was Ian, his red hair glowing like fire against the iron bars of his cell. ‘Am I a bad person?’

‘I don’t think so,’ said Malcolm. His voice was soft and calm. It made Richard feel as if he was within a dream and that neither of them was fully in reality. ‘I’d really like to explore your guilt with you, Richard, maybe help you let some of it go.’

Richard tipped his head back and laughed.

‘I’m happy she’s dead,’ said Richard, suddenly shooting forward in his seat. He leaned over his long legs and looked up at the little red lines in the whites of Malcolm’s eyes. ‘I don’t miss her, I don’t feel anything, I’m glad she’s dead!’

‘She hurt you,’ said Malcolm, swallowing back his sadness. ‘She abused you.’

‘We used to call her Owl Eyes.’

‘Owl Eyes?’ said Malcolm inquisitively, unable to contain himself as his ears pricked up at the new information.

‘She had these wide black eyes,’ said Richard, staring absent-mindedly at Malcolm’s desk.

His mind drifted back to when he was five years old, and had to pick an animal and write three facts about it for a school project. He chose barn owls. He had admired the large fluffy birds with the heart-shaped faces and breath-taking wings, until he had read about them. He remembered his heart in his small torso thumping hard as he read the gruesome description of how barn owls kill their prey. He never forgot. And when he told his big brother in an attempt to freak him out, Ian had said ‘Sounds like Mum.’ The boys had laughed themselves stupid. They laughed so loud, it attracted their mother’s attention, and therefore several thwacks across their backs and thighs from the wooden spoon.

‘Do you know, owls murder their prey by crushing them to death in their talons?’ said Richard, looking disorientated as stared at Malcolm. Malcolm remained silent, holding his pen by his mouth. ‘They tare rodents apart. Then they throw up the carcasses. Owls look like majestic creatures, but really they’re monsters.’

Richard and Malcolm sat in silence, the therapist watching his client as the ominous statement hung in the air like a foul odor.

‘You’re entitled to feel how you’re feeling, Richard,’ said Malcolm. Richard sat slumped against the back of the sofa, staring up at the ceiling. No more, he thought. Enough now.

‘Richard, where are you now?’

He could hear Malcolm’s voice, but it sounded as if his therapist was speaking underwater.

‘I still hear the knife slicing her neck. Thwack!’ Richard thought. He must have thought it because he didn’t hear himself say it, yet his voice sounded underwater, just like Malcolm’s voice had.

Malcolm looked up at Richard, then back at the flashing light on his tape recorder. He gently lifted the cover of his book.

‘You were never there, were you?’ said Malcolm, looking down at the closed book. His voice seemed to penetrate enough for Richard to lift his head. ‘You walked in after the murder.’

‘I’m sorry,’ Richard said, disorientated. He rubbed his face with his hands. He was so tired. Reliving the past was no life. He was only here because his wife had threatened to leave. She had promised a divorce if he didn’t “put his demons to rest” – and losing someone else he loved was out of the question, so here he was, sitting in Malcolm’s office, paying him to unlock the doors that had been locked for years and for good reason.

We tell no one.

‘Don’t be sorry. Remember when you feel yourself falling, mulling over the past. Stop. You have to stop going down the same routes, finding the same dead ends.’

Richard nodded. He looked at the clock. The hour was up. Time to go home.

As if reading Richard’s mind, Malcolm stood up and stretched, then headed to the shelves behind his desk where he placed the leather-bound book. The men stared at each other in silence.

‘Are you sure this should be your last session, Richard?’ said Malcolm.

‘You were there, weren't you?’ Malcolm said abruptly.

Richard nodded, still staring at the flashing light, his eyes bright as a tear fell down his cheek. Malcolm picked up the tape recorder.

‘Everything's confidential,’ Malcolm promised. ‘Forgive yourself. You did what you had to do.’

What have I done? Ian–

‘We tell no one,’ said Malcolm. He erased the tape.

See all posts by Kat Morris →