by Eva Brando 2 years ago in capital punishment

The Man Behind the Clown

John Wayne Gacy, the "Serial Killer Clown" (March 17th, 1942)—Who was he, what did he do, and what happened to him? The name people used for him probably tipped you off by now, but who was the man behind this clown?

I believe that every serial killer has his own little twist, making all of them interesting and pretty creepy, in their own way. John is no exception to this statement. I have noticed that one thing many killers have in common is that they look as normal as any other person you would meet on the streets or in your supermarket. The thought of that isn't the most pleasant, I know, but in many cases they do end up being just as normal as you and I.

John Wayne Gacy was a serial killer and rapist who killed at least 33 young men in Cook County, Illinois. He had an abusive childhood and struggled with his sexuality throughout his life. His murders got uncovered after he got arrested for sexual assault in 1968. Even though he kept saying he was innocent, Gacy was found guilty in 1980. His punishment: multiple death penalty and a death sentence, to then be executed by lethal injection.

At a young age, Gacy's life wasn't the easiest one. His father would often go down into the basement to drink Brandy before dinner. As he drank, the family waited at the dinner table in fear. He would then come upstairs drunk. If the children misbehaved, he would spank them with a razor strap. Later, his sister, Karen Kuzma, would explain in a biography that they learned to toughen up on it and that John wouldn't even cry anymore, which, she thinks, enraged their father even more.

But where did he get the name "The Serial Killer Clown?" He seemed like a real decent and good man. He would dress up as a clown and go to hospitals to cheer children up; make them smile. He also was a performer at children's parties. Sometimes he would dress up as his alter ego, "Pogo the Clown," when he killed someone. He buried most of his victims under the house or garage. Other bodies were found nearby Des Plaines river. He lured his victims to his house, promising them construction work. He would then capture them, sexually assault, and eventually strangle most of them with rope.

On January 2nd, 1972, Gacy committed his first murder—Timothy McCoy. The 15-16-year-old was at the Chicago bus station when Gacy picked him up, offering to show him the best sights around the city. McCoy was traveling from Michigan to Omaha but had to stay a night in the city because of the bus hours. He then promised McCoy could spend the night at his house and that he would bring him to the bus station in time the next day. Sadly, McCoy never made it out of the killer’s house. In gratitude for being able to spend the night, McCoy made Gacy breakfast, but when he went to wake Gacy, McCoy had a kitchen knife in his hands. Only after Gacy slammed the boy’s head against the bedroom door in order to get the knife out of his hands, obtained the knife, and stabbed the boy in the chest several times until he stopped breathing, did he realise what the boy’s intentions were. He then proceeded to cover the kid in concrete, then bury him under the crawlspace in his home.

There are lingering concerns that Gacy was responsible for more bodies that have yet been found. On August 1st, 2017, victim no. 24 was identified as the 16-year-old “Jimmie” Byron Haakenson. The young boy had left home to move to Chicago and live in the big city. On August 5th, 1976, he called his mother to let her know that he had arrived safely. Police believe that Gacy killed him shortly after. In 1979, the mother contacted the authorities to find out if her son was one of Gacy’s victims. She didn’t have any dental records so they couldn’t identify him. Jimmie’s mom died in the early 2000s, but family members were able to provide DNA samples in 2017, and authorities had an immediate match to victim no. 24

To finish this story, here is one of the paintings Gacy made while he was in prison.

"Pogo in the Making" 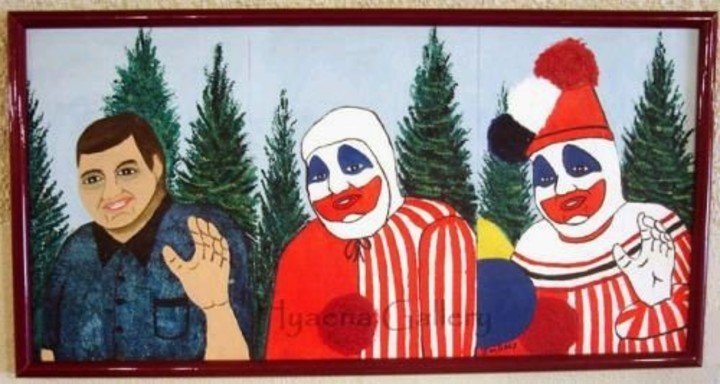