A savior on Wings

by Olivier Champagne 7 months ago in cartel
Report Story

A story of Redemption and Mercy 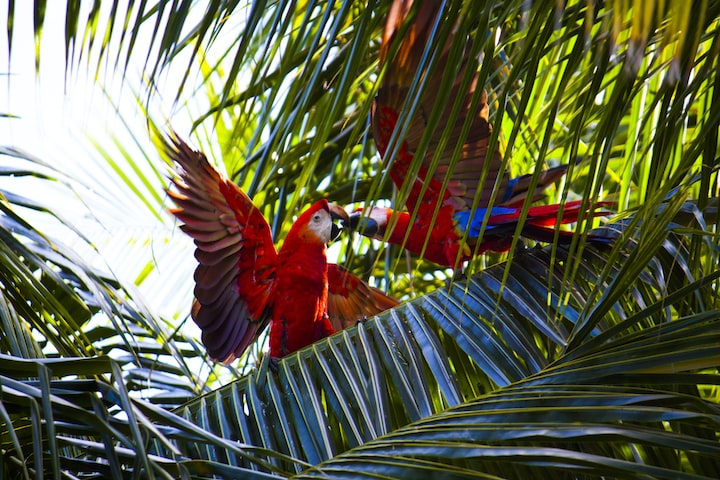 Photo by Debora Tingley on Unsplash

Javier trod through the muddy jungle path, one hand on his holster and the other one firmly grasping his captive by the shoulder as they walked through mud, over rotting trees older than some of the countries on the continent, and through clouds of mosquitos thicker than the fog that would occasionally settle over Rio, making it impossible to see 2 feet in front of one’s self and hiding the Cristo Redentor statue in the mist. I’d much rather actual clouds than these biting bastards, Javier thought to himself as he temporarily let go of the man’s shoulder to swat at yet another buzzing formation. He tried to keep his mind off of his task, for, while it wasn’t anywhere near the first time Javier had had to take someone down the jungle path, it still left a bad feeling in the pit of his stomach anyhow. I shouldn’t be so soft. This shit has to be done. He stole from us, and now he’s gonna learn what the price for that is. It’s not my fault he was stupid enough to get himself caught. Still, despite trying to harden himself with these thoughts, when Javier felt the intermittent shudders of the blindfolded and bound man in front of him, it was hard not to want to be sick.

“Please, senhor, please…” the man was muttering. “I didn’t know who it was I was stealing from… my family, we were hungry, please…” Javier did his best to tune it out and only gave the man another shove to let him know he had better pick up the pace. They were getting closer to the spot now- an open clearing in the jungle maybe an hour’s walk from the main road, next to a swift-running creek. Javier knew the place well. His gang had been using it to dispose of competitors, snitches, and poor luckless thieves like his current captive. Pop them there, and either chuck them in the creek or let them lie there for the animals- There’s never anything left of the poor bastards anyways. The last man he’d brought over had been a small-time street dealer who’d made the mistake of picking the wrong corner to sell on. He’d shat his pants when they’d got to the clearing, and Javier would remember that smell for the rest of his life- that smell, and how he looked when he pitched forward, the bullet drilling an uneven hole to the back of his head.

“Please senhor, please… if you can’t let me go, at least let me…” the man finished by indicating his rear end. Poor bastard must be terrified. Why can’t I get someone brave for once? Perhaps mindful of the smell from the last execution, and not wanting to have to deal with it again, Javier shoved the man against a tree, kicked a shallow scrape of a hole into the mud, and told him to get on with it.

While his pathetic prisoner did his business, Javier leaned back against a tree and lit a cigarette, careful always to keep one eye on the thief. He took in the sounds of the jungle- bugs flitting here, there, and everywhere, the call of a hundred different birds, and even the cry of a jaguar in the distance. Everything was so green it was hard to believe, and even harder to believe he was going to spill blood in this place. Suddenly, the leaves in the tree above him started rustling. Javier reached for his pistol, in a panic, but saw that it was only a bird. But what a bird this is… A huge and beautiful Scarlet Macaw had settled on a branch but a few feet above Javier’s head, and seemed to be staring at him, inquisitively. He hadn’t often seen one of the beautiful red birds- they were endangered, by deforestation, hunting, and the constant stream of pollution sent up by the cities. His grandmother used to tell stories, about childhood in her old village, where they were considered to bring good luck. She’d once seen over a dozen of them in a single tree, signing happily at the noonday sun. “And that’s the day I met your grandfather, my boy. “ Well, if they mean good luck, they certainly aren’t doing their job for this dumb soul here. The bird stood on its branch, unmoving, meeting Javier’s gaze with one just as fixed. I wish it wouldn’t stare at me like that, though. It’s bloody creepy. I’ve never seen one of these be quiet like this before. He couldn’t help but think of earlier times, before the gang, before he’d had to kill, and back when his Grandmother was alive. When I still thought someone, or something, was looking out for me. He’d always had doubts before pulling the trigger on someone before, but now, with this marvel of nature staring at him judgingly, it felt more wrong than usual, like he was bringing ugliness into a beautiful part of the world. Still, he had a job to do. When he saw that his prisoner had finished with his fearful and shaking business, he grabbed him by the arm and took him along. It wasn’t another 15 minutes before they got to the clearing.

His victim must have known his time was up when he felt the vegetation clear, because he fell to his knees and began blubbering- begging for his life, begging for a chance, begging for God to help him- anything. Javier tried not to listen. With shaking hands, he pulled the Browning pistol out of its holster and leveled it at the back of his victim’s head. The poor wretch was crying, swaying back and forth. As Javier’s hand settled upon the trigger, it was as if the floodgates of his mind opened. He saw everyone he’d previously brought here- dealers, heist artists, members of other gangs- some of them not even legally men yet. He’d heard their prayers and saw them cry and he’d blown all of their brains out-not without hesitation, but without question. But now he felt something he was not sure he’d felt before. Remorse. He lowered his gun arm, and before he knew it he was also on his knees in the grass, tears blinding his face. He saw them all. The little boy who claimed he only wanted to join a gang to make friends. The dealer who swore that he had a problem, that it was only because of the drugs, that he needed to get clean… The father of two who kept saying he had money, that he’d pay him anything if only he let him go… he felt their fear. He felt their pain. What have I fucking done? This isn’t me!

He saw himself, a happy 12 year old boy, who wanted nothing more than to spend the afternoons helping his grandfather in his shop, who applied himself at school every day, and who swore he would never touch a single drug. He saw the moment it all changed, when he was only 16, and his father’s debts forced him to join a gang or see his family being cut up in front of him. He saw his past, and all he could have been. And all that he was not. All the pain he’d caused. Only one thought bounced through his head now, over and over and over like the melody of the jungle itself. “I’m sorry. I’m sorry. I’m so goddamn sorry.” It was all he could hear- him repeating those words like a prayer over and over. His captive’s crying had stopped, no doubt out of confusion over why he wasn’t dead and why his captor was weeping. And then, as suddenly as it began, the pain in Javier’s head went away. He dried his eyes, dusted himself off, and took a look at his surroundings.

There, on a branch of a tree across the clearing, staring straight at him, stood the Macaw. Javier saw it. For some reason, he nodded. I understand. I know what I need to do.

Without a word, Javier threw his gun down into the dirt. He drew his knife, cut his prisoner’s bonds and removed his blindfold. The man looked at him, puzzled, wondering what was going on.

After making sure his erstwhile captive was heading down the opposite path out of the clearing, Javier also turned back. He didn’t know what he was following- the Macaw, his grandmother, or something else. All he knew is he wouldn’t ever kill again.

More stories from Olivier Champagne and writers in Criminal and other communities.