You Should Take A Break From Break Dancing

by Shamar 21 days ago in Embarrassment

My most memorable cringe-worthy time, standing in the pouring rain. 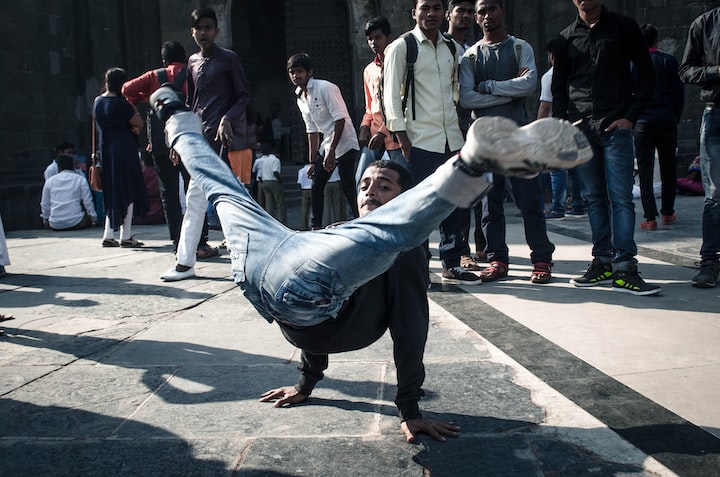 I can remember the day so clearly. It was meant to be a summer's day because as we took a trip down to the local fair - my best friend, her boyfriend and I - but we live in England so summer doesn’t really exist.

My best friend (who I will call Panda) was always someone who does random things because she feels like it - which I’ve forever admired. During our teenage years, we went through odd phases which isn’t uncommon at all. Personally, I didn’t really have an odd phase but Panda was going through a phase of break dancing. She’s never been a dancer, but all of a sudden she wanted to learn how to breakdance...

At the age of 17, she decided to join a break dancing group in our local town. During the fair, there was going to be a performance from her break dancing group. As a good friend should, I went to the fair to support Panda alongside her boyfriend. I had never been to this fair before so I didn’t quite know what to expect, in fact, I had never even heard of it.

What did I see when I arrived? About 10 tiny stalls selling pretty much the same thing, sweets and overpriced homemade stuff (I bought some sweets). No Helter Skelter, no Merry Go Round, and not even my personal favourite - Hook a Duck! I can remember Panda being really hyped about the fair because it was a family tradition for her to support it - so the least I could do was respect that and pretend to join in the hype. Why didn’t she bring her family then instead of dragging me along?

I will confess this here - thank goodness I’m a good liar because the fair was absolutely crap. Panda’s boyfriend never actually admitted to her nor me that he didn’t want to be there, but I had known the guy for so long I could see it in his eyes. It was crystal clear he would give a leg and an arm to be at home playing Fifa.

The whole thing was cringe and awkward. I had to pretend to be interested in everything that didn’t involve sweets or some kind of food.

What’s that? A little bit of wet on my hand? Did I spill some of my drink? No, it’s just typical British weather. Rain. I can recall someone had lent me their umbrella because there was no shelter and I had brought no defence weapons from the rain.

The break dancing group decided to perform early before the grass got soaked and slippery. What a good idea! Get the main event over and done with so I can go home!

And what a main event it was. I will also confess this here - the dancing was absolutely crap. The entire group was out of synch, including Panda, and they played one of the worst songs I had ever heard in my life; Jessie J - Domino.

You can’t tell your best mate they needed to give up dancing immediately and invest their money elsewhere. When the performance was over, I can remember the praises I had said; “Wow, you were really good! It must have taken such an effort to get that together in such a short time! You’ve made good progress and you should be proud!”

Yeah, I lied multiple times. This seems really harsh, but how are you meant to tell someone so close to you their rubbish at their passion at the age of 17? Panda’s boyfriend was equally showering her with praises, but that’s kind of what he signed up for as he was in a romantic relationship. I’ve known that guy for so long, I know it was lies and the dreams of being tucked up in bed playing Fifa were soon to be a reality.

I know he was cringing out during the performance, I could see it our the corner of my eye. I most certainly was.

Panda hates rain because she cares a lot about her hair, so we got to go home very shortly after that. What a waste of a day, I was only out for about three hours maximum and had mentally and physically prepared for a day full of festive fun.

Panda asked me if I wanted to go to another break dancing group performance and I said I would let her know; “I think I’m seeing my Grandma then, I’ll let you know.”

Now, if you’re smart enough you’ll know that when someone says the words “I’ll let you know” it means you need to just go on ahead without them. It’s a very polite way of saying no because let’s admit it, everyone knows their personal plans and if someone was really that interested then they would just say yes.

She packed in break dancing after a few months because our exams started to require a lot more time. Although, I do recall her next phase at the age of 18 being tattoos. Her first tattoo was of a roaring tiger in a forest covering her entire left thigh. I remember being told about it and believing she would back out. Jokes on me for forgetting Panda never backed out of anything!

Luckily, I didn’t have to lie that I didn’t like this because she knows I’m not a fan of huge tattoos. It was a straight confession to her face. The fact that the tattoo got infected and the artist ran away to Canada before he could finish the job really spoke volumes. No wonder it was only £30...

Now I reflect on our relationship, there’s a lot of things I could confess to Panda; it was me that stole the chocolate bar out of your lunch box in that school trip to the zoo, it was me who spilled the cider on your living room rug even though Nathan took the blame because you was so angry, it was me who broke your expensive Mac lipstick when you lent it to Bay that night in the club. There are a few more confessions I could make but they aren’t for the public eye I’m afraid!

I sound like an awful best friend but to be honest, these small things occur more regularly than you think and I’m sure she has done something similar to me. As long as I was there at the hardest and more serious of times, which I was, I can call myself a good best friend.

Panda and I aren’t friends anymore after 15 years of solid friendship. No, not because of my good lying and acting skills, but because as life grew we then grew apart (and she's a bitch). Panda and her boyfriend broke up shortly after that day, but that’s a whole different story...