by Chris Freyler 2 months ago in Bad habits
Report Story

The kicker is the choice has to be yours and you can't live life with regrets. 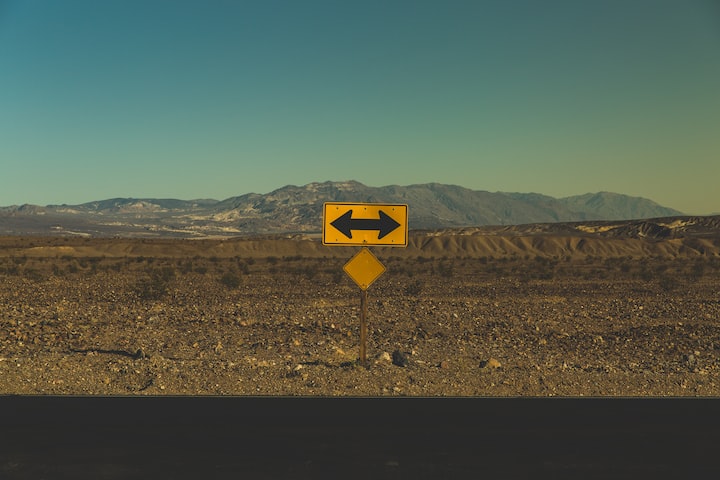 Joe grew up in a family where he was mostly walking on eggshells. His decisions were based solely on the mood of others. With each decision he made, he was on the hunt for acceptance and approval from those he was surrounded with.

That’s what his parents taught him, live their path in life, not his.

The problem was that at such a young age, Joe had no control over who he was around most of the time. So he made many decisions he wasn’t comfortable with.

Joe always asked the opinions of others as he stumbled through life.

He attended college like everyone else. It wasn’t something he wanted to do, but to feel accepted, he chose it based on how others would view him. So the best option was to go, even if it wasn’t something he wanted to do. He jumped from major to major and even had a stint in D-1 football when he made the team as a walk-in. But with every choice, Joe had a great fear of regret. Joe lived life on “what ifs.”

After college, he got married; again, he was on the fence with a choice to marry or not to marry. He and his ex-wife had several break-ups before the engagement, and twice, they called off the wedding after everything was paid. Joe looks back, and there are bits and pieces he doesn’t remember why he made the choices he did, but the underlying reasoning was that of approval of others. Joe had no idea who he was or what he wanted in life.

The career path that never happened.

Joe always wanted to get into some form of law enforcement or psychology. He took some Forensic Psychology courses and Criminal Justice, but his interest in things would fade as he wasn’t getting the validation or approval he was conditioned to desperately chase.

Joe decided to drop out of college and continue working at his cousin’s bakery. There was an opportunity presented to make a lot of money, and that was Joe’s #1 sense of validation, money. It gave him an identity. He jumped at that option, making just north of $300K a year. At 27 years old, he finally felt like he had a purpose.

After traveling, distracting and blowing most of his newfound wealth, he bought the family bakery. Joe was on the fence again with his decision. He would go to the Small Business Association for guidance and confide in friends and family on what he should do. Joe doesn’t remember if it was a choice made out of desperation or one where he assumed everyone else knew what was best for him. His other option other than buying the bakery was to get divorced and travel.

Joe owned the business for four years after finally pulling a profit. He bought a failing business, and the closer he got to sign the paperwork, it became clear what he was buying. In the end, he was making 6 figures a year, but the happiness still wasn’t there. Joe was still living on “what ifs” and sold the bakery.

The power of regret.

This is one of Joe’s big problems. He’s always looking at the other side of the fence and pays no attention to the yard he is standing in. He always blames his choices on others and then regrets his choice because of “them.” I don’t blame Joe’s regrets; he wasn’t aware of what he was doing.

He was making his own bed with conditioned and learned behaviors and had problems sleeping in it; then would throw the blame off onto others so he could continue living a guilt-free life in regret. At least, this is what he thought.

The new path with a different outlook.

Joe’s mainly made terrible choices in his life. He is trying to accept that is the past and the path he is on now has so much potential it frightens him. He is working on sitting with himself and spending more and more time alone. Joe just came out of yet another toxic relationship. Joe finally made a choice to not contact her ever again. And if she is ever to find a way to reach him, to not respond.

Joe has learned as much as humanly possible from that relationship and all the other fucked up choices he has made in life. Joe has learned that the only choice that matters is his, and whatever he chooses will never be the wrong choice. Choices have consequences, and it’s his job to select the best choice with the least negative consequences. All while still holding himself, not others accountable.

Sometimes there isn’t a “right” choice.

Sometimes, maybe there isn’t a “right” choice, but just a choice. How does Joe even know what he regrets from not making the right choice? That’s the thing about choices; you never know the “right” choice because you can’t choose both simultaneously.

Joe’s purpose from here on out is to make a choice and live with the consequences. But more importantly, whatever that consequence is, take the lesson and don’t regret it.

Joe’s passport arrives in about a month. He will have no regrets.

What is a choice you have a difficult decision to make?

If you make it and deem it was the wrong one, will you live a life of regret like Joe?

Mistake Maker Extraordinaire. Writing from a place I don’t understand at times. I write to help myself, in return hope it helps you. Just another Quora guy.

More stories from Chris Freyler and writers in Confessions and other communities.