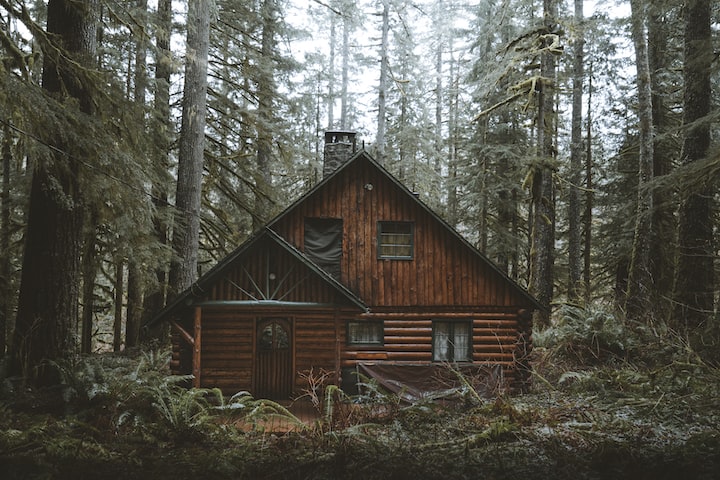 Photo by Peter Thomas on Unsplash

The cabin in the woods had been abandoned for years, but one night, a candle burned in the window. I stared in into the window and I was there sitting at the window staring back at me in the woods, at a desk writing at a with one lone candle burning. Surprisingly there was a typewriter there with fresh typewriter and ink, and the chair was comfy. I decided not to question the reality of the moment because the story had to be written, and even though the beginning wasn't the truth most, of the rest was.

I started typing happily, thinking back to my youth, the joy of using a typewriter, of course I did not enjoy its use in its time. The only reason I was using typewriters was because we were broke. Everyone else had word processors or basic computers. I slaved over trying to white out or desperately erase one letter, so as not to have to retype one whole page over because of a typo, but sometimes there were so many typos I would be up all night starting over again and again, trying to convince myself I was not a perfectionist like her. I would not strive for an A, maybe just a B instead. And usually it was in a cold dank basement so I didn't wake up everyone else with the clackety clack.

But this night I decided I would enjoy it because I was not me. I was another version of myself, if I was myself at all. A fire crackled merrily in a fireplace that I did not realize was I there, and the real me wandered off back into the hell that awaited her for being too nice for trying to save the world. For not listening soon enough to taking care of herself and protecting her children, and putting the gas mask on herself first against the toxicity of those who claimed to love her and befriend her. But her sister, now her sister always protected her.

And lately how she wished she was her and how she always wished she was her. If I was her I would always make the right most perfect decisions and never get hurt. She was always stronger and more wise. She always got the most perfect grades and she was never in debt. She managed her money and got out of the household sooner. She was not stuck and still worried, trying to struggle with just everything; still making the same traumatic mistakes over and over again by trusting people.

When she was younger she was physically stronger and beat up anyone who hurt her. She was admired and people respected her. How I wanted to be her. But this was only a brief respite from this reality. I knew eventually I would have to finish this chilling horror story, which really isn't one at all, but the fairy tale. The escape.

I never really had a problem knowing who I was. In fact I was defiant in separating myself and making sure I was different, but the more different I was the more I was the same to her ironically. It didn't happen till the trauma of the pandemic became too much and until I tried to do one good deed too much. You see it was my need to help a kid who needed a home. And he molested my son. That is the real horror story.

I sat at work, in a meeting and everything just crashed in on me and I just saw myself as her. The horror was I did not realize yet the horror of his trauma. He was shutting down and I saw the signs because unfortunately I had experience with this, much longer story for another time, maybe never. And that was my first real experience with disassociation. I literally looked up at the screen, waiting for a zoom meeting to start, at myself and saw someone else. I saw her. It wasn't till I processed later, as I am trying to heal; that I realized all along how much I tried throughout my life to be other people. Rely on their strength instead of mine, when I had it all along.

It wasn't long after that the truth came out. I had been trying to figure out why my son was no longer himself. The real horror of my life. Sometimes truth is so much more disturbing than an abandoned cabin in the woods with a lone candle lit. When I read that prompt, it actually sounded like peace. We are all healing and getting help, after months of wait lists because of the pandemic and I truly wish I could disassociate and escape to a cabin and keep my kids safe from now until eternity.

Go back to last summer, when my kid was happy; he tells me he remembers that when we look at pictures, but it is what it is. The further horror; the kid himself,same age. He is not a monster. What happened to him? I will never know because he wasn't mine biologically to help and I will never know and both my son and I miss him and cry for him. He lived with us for two years. They were both very young. The future will tell and maybe there will be a happy end to the cabin horror story. but for now this is where we are at.

I get up every morning, and ground myself for 30 minutes just to go to work after listening to my son at night talk about his imaginary world that he escapes into and he now believes is real, like I try to with my cabin, but I logistically know I can't. He tells me he is no longer sick, can he see his friend again and I just don't know the answer because I am winging it and I know secretly I want to see him too but I have to choose my son first. I wish that I am sitting in a cabin in the woods, with a crackling warm fire, a candle burning, and a typewriter tapping away as I create my stories, my children playing; happy once again before this nightmare happened.

More stories from Zelda Foxx and writers in Confessions and other communities.