Tattoos: Why I Just Can't

by Jaime Freedman 7 months ago in art

My unpopular opinion on a very popular artform 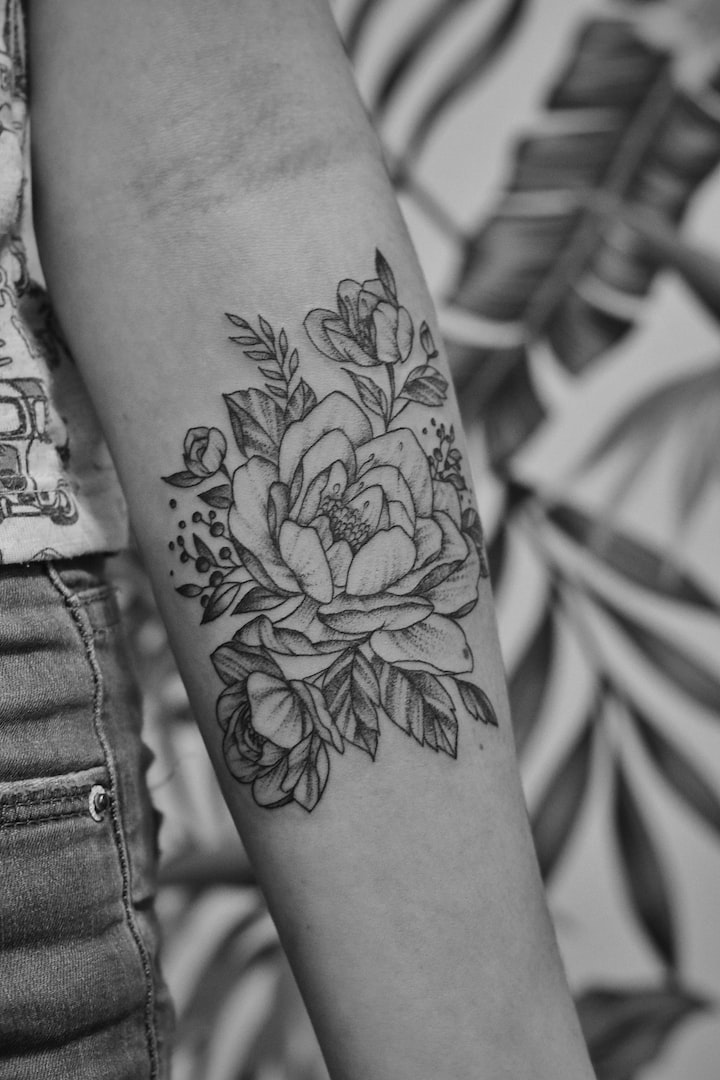 Photo by Eduardo Vaccari on Unsplash

I loved boobies as a small child. Now this might not come as a shock being that I am a lesbian, but my love for the boobies comes from an appreciation for my family being able to navigate basically giant watermelons being attached to their skin. Whenever the bras were flung off by my grandmother, my aunts, or my mom I was in awe of those giant jiggly body parts that would fly in every direction. The boobs were all shaped differently; some were round and some were coned and some were so big I couldn’t believe my aunt was hiding them under her shirt. They could do incredible tricks with them. They could make them go in circles, they could swing back and forth and they could even set things on them. Boobs were amazing. They just seemed like these mysteriously funny large adages that the females in my family carted around- and I loved them. I was a little obsessed with them, always asking to see them or touch them. They were kind of my happy place as a small child until this was ruined by a bad tattoo.

It was the 80’s and tattoos weren’t as prevalent as they are now. Occasionally I would see an old faded out Semper Fidelis tattoos on the plumber or local mechanic, or a tiny rose on someone’s ankle, or even an R.I.P Uncle Bunky- but they were mostly hidden and I didn’t really notice them as a kid until this fateful day. I was probably around 5 or 6 and I was at Skyharbor airport I am guessing we were on our way to New Jersey from Arizona. We used to spend our summers at “the shore” as everyone called it. Before it was famous for those MTV’s stars and when it was just a cool place my family went to swim, enjoy ice cream in waffles, and sing New Kids On The Block songs at the top of our lungs. I had been running up and down the walkways at the airport, dodging the wheelchairs, suitcases, and little transport vehicles until my mother grabbed me by my shirt and told me to sit down in one of those plastic chairs. Instead of sitting, I crawled under the chair and started counting how many pieces of bubble gum were attached to each chair. I was jarred from my counting by a small piece of cigarette ash falling on my back which forced me to look up and see who was smoking and there they were-the biggest boobies I had ever seen. These weren’t just regular sized boobies, they were huge and wrinkly and falling out of a pink lace bra and they were ancient. And on one of them was the most hideous, faded, black ink tattoo of a ship I had ever seen. It was ugly and directly in my face. What was once a fun and inviting playground of booby bliss was now marred and damaged by this hideous tattoo. Even thinking about it now I get a little bit of throw-up in my mouth, which at my age is hard to rule out as heartburn but I am guessing it is from this bad memory.

Now in my 40’s, I just don’t like tattoos. In the last ten years (from my own scientific observation), I can admit the art and craftmanship of the tattoo artists have produced much better work. People are literally getting pieces of artwork on their body. Which leads me to believe we have now jumped the shark from purchasing art work to having it seared into our bodies permanently. Does this just prove how selfish we have become with our resources? Unlike our civilized ancestors who purchased and revered artists work and displayed them for all to see, we collect art on our bodies, covering ourselves in someone else’s handiwork. I can already hear the peanut galleries “humans have had tattoos for thousands of years, even found in mummies on every continent.” It has been said that tattooing may have been a way to cover scars made from treating diseases. If this were the case in modern times I can understand this. Have you ever tried to take a knowing 7-year-old to get shots at a well visit check-up? We should all earn tattoo badges for every time we have held down a child getting a flu shot.

My biggest fear is that one of my four children will have their body covered in tattoos. There I said it. But don’t tell them I said that. I completely understand that if I voice these concerns or let them know my true distaste for tattoos I will 100% end up with a child looking like Post Malone with a face tattoo. I try not to voice my distaste for tattoos anymore in any social setting because the minute you do-you find out your boss had a tramp stamp done in Cancun on her 21st birthday or your best friend’s husband has Michigan State tattooed on his ankle, or your mother-in-law has a “tasteful” butterfly on the top of her foot. Basically, half of everyone I know has a tattoo. That is a big opportunity to offend everyone I know, my family, my friends, my therapist, the guy at the post-office, and my favorite barista. I literally have no opportunity to joke about the ridiculousness of tattoos. Oh, and social media makes it even better, the oohing and ahhing of every house wife over 40 and their new tattoo with their toddlers writing of “love” or “mom.” Each one of them creaming over how unique their tattoo is and how no one else could possibly have ever come up with that? I mean it is AMAZING when you tattoo toddler art on your forearm.

Tattoos are everywhere and they are so common that there are tattoo roulette games. Have you heard of this? Did you know it existed? Google it. People literally spin a wheel and then whatever comes up on the wheel they have tattooed on their body. ON THEIR BODY. ANYTHING! Now that takes some secret kind of faith in a higher existence or just some crazy stupidity. There are also FLASH tattoos where a tattoo artist offers 10-50 of their best designs, you pay a set fee, choice from one of the selected tattoos, and then the tattoos are “retired” never to be inked into another arm, thigh, or buttocks again. You literally can have a limited series tattoo by your favorite artist. Imagine how beautiful that will look one day as you wither away in the old folk’s home comparing tattoos. I can see it now, the reminiscing of flash tattoos as octogenarians eat applesauce and cottage cheese. “Look, this was a tattoo of a stop sign done by David Z in 2024” and “Check out my antique PS4 controller done by Jeanine Lily in 2023, I waited four hours for this one.”

Now 30 some years later after the airport incident, I still just don’t like tattoos. Maybe if I try and analyze that moment, the tattoo ruined my pre-pubescent love for breasts and so I am kind of bitter. But whatever it is you can count on the fact, that I am not getting a tattoo. I will also probably offend you with my fake “I like it” voice when you show me your newest piece of art that you have PERMANENTLY inked into your wrist.

I am a mom of four that spends my time dong laundry, taking care of small humans and in the five to ten minutes I have outside of that-trying to write. I love Selena and books and anything Whitney.