Studies show that natural oil reduces the appearance of scars

by Vasile Stef 2 months ago in product review
Report Story 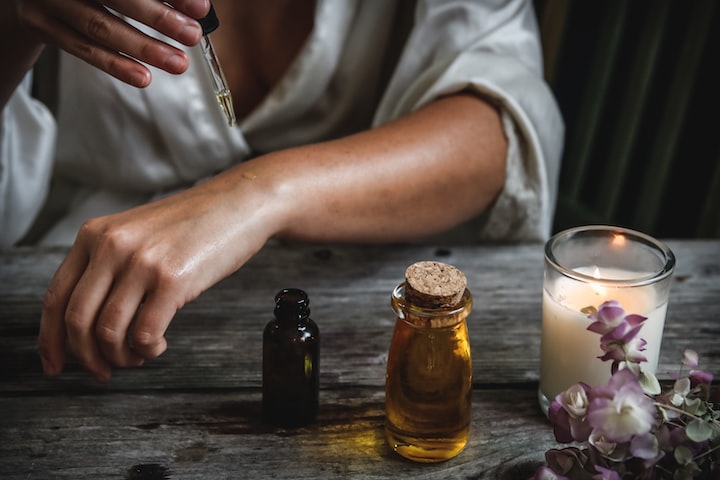 Photo by Chelsea shapouri on Unsplash

No one should feel that way, and that’s why so many studies are conducted to see how to get rid of scars of every type. One of the oldest ways to reduce the appearance of scars is to add natural oils to your skincare routine.

Studies show that natural oil reduces the appearance of scars and truthfully, it’s something that everyone should try if they want to minimize scars from acne, cuts, or similar causes.

GLAUX CHEM® has been using oils that are linked with better scar appearance for ages, primarily because of the science that backs them. Here are some of the ways natural oil can help you get that perfectly untouched appearance you’ve been wanting to have.

Let’s talk about what we mean by “natural oil” first…

Not all oils are good for your skin. Natural oils are oils that have been made from plants—not animals, petroleum or minerals. These are oils that are rich in enzymes, vitamins, and free radical-fighting antioxidants. Examples of natural oils would be lavender essential oil, hemp oil, or really, any kind of carrier oil used in the making of massage oils.

Natural oil reduces the appearance of scars in a wide variety of different ways because of what they contain. We’re going to take a look at some of the best traits they have, and why people love seeing the effects they have on their skin.

Most natural oil, particularly when it comes from citrus plants, hemp, carrots, or fruits, will have a pretty good amount of Vitamin C in it. Vitamin C is known for being an antioxidant that prevents skin cancer, premature wrinkles, and sun-related damage to your skin.

What most people aren’t aware of is that Vitamin C also boosts collagen production, and that’s what makes this compound one of the ways natural oil reduces the appearance of scars. Collagen is what helps skin heal and stay youthful.

Better-healed skin means that you get less scarring if the wound is fresh. In the case of older scars, it can help reduce the appearance of skin damage and redness in the surrounding areas. GLAUX CHEM's® Face & Body Moisturizing Oil actually uses Vitamin C-rich oils because of how useful it is in skin health.

Since natural oils also have sun damage-reversing traits, using these oils will also reduce the chance of scars darkening.

The sun is one of the worst enemies for people who want to reduce scarring, primarily because it causes scarred skin to darken significantly when compared to regular skin. Natural oil reduces the appearance of scars by making skin a little more resistant the sunlight thanks to the high antioxidant counts it has.

That being said, most skin experts would agree that it’s best to pair natural oils with a trusty sunscreen if you want to maximize scar reduction in the summertime. You can never be too careful!

Certain oils, such as carrot seed oil, have also been proven to help even out skin tone.

If you check out some of the studies done on carrot seed oil, you’d think it’s a panacea for skincare—primarily because it has so many positive traits. It’s antibacterial, antiseptic, antifungal, anti-inflammatory...and yes, it’s also living proof of why natural oil reduces the appearance of scars, too.

Carrot oil is especially well-known for evening out skin tone, even with heavy scar tissue involved. That makes it a great choice for people who have older scars that they want to lighten, or for people who are tired of seeing blotchy patches on their faces. GLAUX CHEM® uses a lot of carrot seed oil for this particular reason.

There’s also the fact that almost all natural oils have omega-3 fatty acids in them.

Even if it’s only a little bit, most natural oil you will see on the market will have some concentrations of omega-3 fatty acids in them. As you might already know, a ton of studies have shown omega-3 fatty acids to be miracle workers when it comes to skin health.

What makes omega-3s one of the ways natural oil reduces the appearance of scars is simple: they promote tissue recovery and also help keep skin supple. A lot of the redness that scars have comes from damage that’s underneath the skin—and from the tissue to be too taut to move naturally.

Some studies have even suggested that omega-3 fatty acids can reduce keloid scarring, one of the most difficult types of scarring to treat. By adding omega-3 fatty acids into your skincare routine, you’re making it easier than ever to help reduce scar tissues unsightly appearance, not to mention help prevent new scars from forming.

Natural oil is anti-inflammatory too.

Did you ever notice that scars tend to be a little bit inflamed, even for months after they first form? This isn’t a coincidence. Scarring occurs when your skin is torn and is exacerbated by irritation from that tear trying to heal.

Natural oil is anti-inflammatory, which means that it can help soothe skin that’s irritated to the point that it has become inflamed. By reducing inflammation, your scarred skin will be slightly less raised, and also slightly less red.

It’s also worth pointing out that oil is great for reducing the chance of scarring in newer cuts.

Believe it or not, much of the scarring that people experience could be prevented with proper care. A large amount of scarring is caused by bacteria that prevents skin from healing properly, or because one’s skin wasn’t properly cared for during the time when your skin was trying to heal.

The nourishing vitamins, enzymes, and lipids found in natural oils are excellent for giving your skin the boost it needs to heal. In that sense, natural oil reduces the appearance of scars before the scars even have time to happen.

Natural oil, when used on its own, doesn’t contain any of the harmful additives that can increase irritation and scarring.

A lot of the ingredients that you find in mainstream skincare sound great, but really aren’t. Things like alcohol, faux fragrances, and lab-created additives may pass FDA standards, but truth be told, they’re known irritants. If you want to avoid having healing skin scar up, you need to avoid harsh chemicals—including the ones in drugstore skincare products.

The fact that natural oil does not have this trait is a huge perk, and is why GLAUX CHEM® prefers to use all-natural oils to help improve skin tone across the board. The fact that there are no irritating downsides to the ways natural oil reduces the appearance of scars is amazing, and is why it’s such a great addition to any skincare practice you have.

The moisturizing effects also help reduce scarring in other ways, too.

Oil is naturally moisturizing. Adding moisture to your scars will smooth out their texture, help your scars match your skin’s normal texture, heals wounds that are superficial, and also help avoid too much redness due to dryness-based irritation.

Lastly, there’s a serious preventative side to the ways natural oil reduces the appearance of scars.

For many people, the majority of their scars are due to acne, eczema, and similar issues. Natural oil is excellent for sebum production regulation. This means that it helps dry skin stay moisturized and oily skin reduce its oil production. It’s also an established acne treatment, too.

By getting your skin’s oil under control and working to reduce the number of breakouts, natural botanical oils help reduce the need to worry about scars. After all, if you’re not dealing with breakouts, you’ll have fewer scratches, cuts, and sores that could potentially scar.

All things considered, it’s easy to see why people who are “in the know” want to try products made with natural oils like the ones offered by GLAUX CHEM®.

More stories from Vasile Stef and writers in Blush and other communities.