Pay It Forward, Book 4: The Conductor

by Jayna about a month ago in fact or fiction

When creativity meets a blank page. 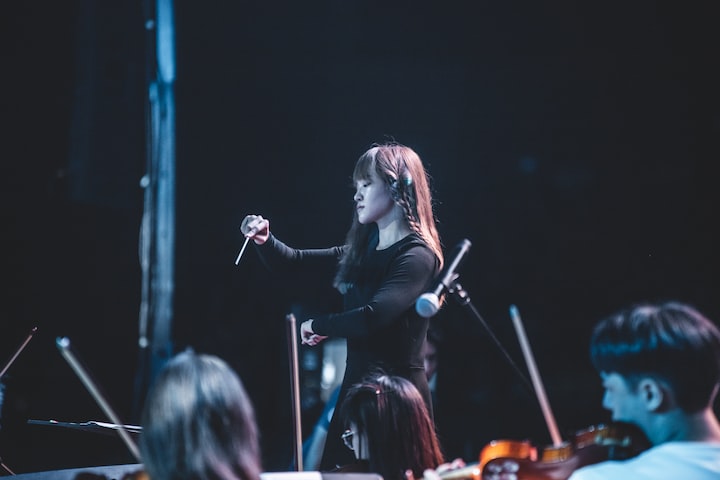 My body was failing me. I was twenty-one years old. I was in the country's best conservatory. I was a star in my music program. My body not obeying my mind felt like betrayal.

The first hint of trouble came during a rehearsal. That morning, my left hand felt stiff. Pressing my fingers against my violin's strings should've been easy, but it took effort. I ignored it. It was probably due to overuse from the hours of daily practice.

My private lesson a few days later was a disaster. My wrist ached and I felt a growing pain in my shoulder. The 800 milligrams of ibuprofen I took provided no relief. I was working on a dynamic piece and my fingers needed to fly across the strings. I lagged.

"Chloe, stop." My instructor peered at me over his glasses. "What's going on?"

"Nothing. I'm just distracted." An excuse was better than the truth.

"If you're not ready to work, let's reschedule."

Mortified, I packed my violin away and went home. As soon as I walked into my apartment, I grabbed a bag of peas, a makeshift ice pack for my shoulder, and took another ibuprofen. It had to be a pulled muscle.

When the ache didn't go away, I changed my diet, thinking that it might be a food allergy. I added supplements to my daily ritual. Nothing worked.

Alex and I had been dating for a year. We met at a Broadway show in a happy coincidence and spent an entire week together. He was an artist, sexy, and ten years older than I was. He was the kind of man that mothers tell their daughters to avoid. I threw caution to the wind. When he went back home, I thought that I would never see him again.

He came back the next week and stayed for a month. Eventually, he had to go back to his life but we agreed to try to make a long distance relationship work. It was a perfect arrangement. Between school and practice, I didn't have a lot of time. Our relationship was built around late night talks before I went to bed.

"How do you know it's not arthritis?" he asked.

"Because I know. You don't know anything. You're not even here." I snapped on the telephone. "Listen, I have a big day tomorrow, I'll talk to you later."

I didn't call him back or pick up his call the next day. Or in the weeks that followed. Eventually, he stopped calling.

I was a musician. A violin was an inanimate object but my hands, it expressed the human emotions that words can’t describe. I refused to accept the possibility that I couldn't play.

I struggled through the semester and watched my star fall. I heard the rumors. Drugs, they said. Ego, whispered others. I wished that they were right. I could do something about those things.

Instead of flying home to Houston for the holidays, I stayed in the City. The weather was unseasonably warm and I was grateful. I was freezing all the time. I moped in my apartment. My only indulgence was my daily breakfast at a neighborhood diner.

Sitting in a booth, I wrapped my fingers around my morning coffee cup, grateful for the small comfort.

I looked up from my bacon and eggs. Alex.

I held back my tears. Alex sat next to me and took my aching hand, surrounding it with his, and I broke down. It wasn't the physical pain, though that was there. It was his kindness after the months of silence.

"Let me take you back home," he said.

We walked back to my apartment. I shivered and he put his arm around me. He ran his hand over my arm. I pretended it was a caress but I knew he was checking how thin I had become. I had lost a lot of weight in just a few months because I moved my body only when absolutely necessary. I was afraid of the pain of physical exertion. I was wasting away.

In my apartment, he helped me change my clothes and I slipped into bed. When I woke, he was still there.

"You must be exhausted. It's been hours." He looked up from a black notebook. "I'm glad you made use of this."

Alex had given the black notebook to me a few months before I stopped talking to him. It was a music notebook with blank pages on the left side and musical staves on the right side. Although I majored in string performance at the Conservatory, I also took music composition classes as electives at the College of Music. I used his gift as my class notebook.

"I wanted to see you. I was in town. I went by the diner because I know you like the breakfast there. Talk to me."

I lowered myself beside him on the couch. I explained what had happened since we stopped talking. Last week, I finally went to the doctor for tests. I got my results. Rheumatoid arthritis.

"So what are you going to do now?"

Alex stayed with me for the rest of the week, except when he had to take care of his art business. In his absence, I went to the Conservatory for the paperwork to withdraw from the program. When I returned home, Alex was waiting with a friend.

"Chloe, this is my friend, Stanley. Stanley, this is Chloe."

"Alex told me a little about your situation. I was diagnosed with rheumatoid arthritis twenty years ago." Stanley raised his hands. They didn't show any of the signs. No crooked or curled fingers.

"You can still play. There's medication. Stress mitigation helps." Stanley picked up the black notebook from the coffee table. "And then there's this. Lots of musicians that have become composers. You can have that."

He put his hand up to stop me. He returned the notebook to the table and put a business card on top. "I'm not here to pressure you. That's my rheumatologist. My number is on the back. If Alex isn't here and you need someone, you call me."

After he left, Alex helped me shower and put me to bed. It was his last night in New York. He had to go back and I needed to get used to not having him around.

The following week, I felt really low. I called Stanley, who ended up being a really pushy old man who wanted to have lunch with me almost every day.

"You have a grant to attend school. Why not take advantage of it?" he asked one day.

I thought about it and decided to try one more semester. Although my hands no longer worked like they used to, I still had my sense of musicality and timing. Turns out, those were key tools in composition. One semester led to another and, with some assistance from the faculty, I changed my major to composition.

Stanley was with me the entire way. I would occasionally get texts from Alex, but we slowly grew apart. I was thankful that he stayed away. It was unfair, but I always associated him with the darkness that followed my diagnosis.

"How's your final composition?" asked Stanley. Our lunches became weekly instead of daily occurrences a while back.

A couple years had passed since my diagnosis and I was preparing to graduate. One of the requirements was a long original composition. Because of my performance experience, I decided to push myself and write for a full orchestra.

"You've been through a lot. There's a lot of emotional capital you can draw from," explained Stanley. "Use it and maybe you can make peace with it."

My disease had gone into a dormant period. Still, every three months, I visited my rheumatologist to see if there was any damage to my joints. I had been lucky, though I still suffered from pain.

After my lunch with Stanley, I went home and sat in front of my keyboard. Although violin had been my first love, my mom insisted that I learn the piano as well. I never saw the point of my piano lessons back then. When I switched to composing, my keyboard became my primary instrument.

I played the first few lines of my composition's final movement. The piece was incomplete and the deadline was soon. I turned on my phone's microphone to record my improvisation session.

I played for a few minutes and stopped. That was a familiar combination. I played it again. Where had I heard that before? I wrote it in the notes for my score. The next morning, the tune was still in my head but I still couldn't place it. I opened my notebook.

My notebook. I rummaged through a box in my apartment and found the black notebook that Alex gave me. I flipped through it, looking for what I knew was there. The same combination of notes.

This was what my work needed. I returned to my keyboard and didn't leave it until well after the sun went down. My composition was complete.

"Have you decided to conduct?" asked Stanley at the following week's lunch.

"I want to but my shoulder hurts," I admitted. "What if something happens?"

"Something will always happen, Chloe. That 'something' might be good or it may be bad. You can't let fear of it stop you."

The College's annual showcase of graduating students' original compositions was a month away. Every day during that month, I stood at the podium in front of my orchestra to lead. Although I took conducting courses as part of my degree, this was completely different. It was my music and, as the conductor, it was my responsibility to keep the orchestra together. It was a lot of pressure.

The night of the showcase, my shoulder ached but as long as I could move, I was going to conduct. Soon, I would be moving back home to Houston. Conducting at the showcase would be my last big moment in front of an audience and I was determined to have it.

Adrenaline was probably what got me through that performance because I didn't feel any pain on stage. When I was a violinist, performances were always exhilarating. I missed that feeling.

As I held my arms aloft for the fading notes of my composition, I heard the rush of applause. I turned around to a standing ovation. Stanley was in the front row cheering the loudest. I didn’t realize how much I wanted the validation until I felt the tears on my cheeks.

A few weeks later, the dean of the College forwarded an email to me. A movie director saw a video of the showcase on social media and wanted to offer me a job. He was authorized to offer me $20,000 to compose the score for a short film.

I was astonished. This wasn't even on my radar. I didn't need to think the decision over. My disease taught me that life can be unfair. It can take away your dreams. But life is also about creation. You can make new dreams.

Thank you for reading. If you enjoyed this story, please consider giving it a heart.

Pay it Forward is a 5-story series of free-standing stories about what happens when a person is faced with a blank page:

fact or fiction
Jayna
Read next: Jay Z: From Worst to Best
Jayna