The pay telephone is gone in most locations but not forgotten

by Cheryl E Preston 22 days ago in gadgets

This is one sight no one will ever see outdoors again in certain parts of the nation.

“What’s that”? my 4 year old grandson asked one day as we went for a walk. In the intersection between the parking lots of two convenience stores there it stood. A payphone with a phone book attached, standing alone without a booth. This was in 2015 and when we checked the phone it had been disconnected. There was no dial tone and nor was there an operator to ask for an additional change to be added. I felt sad as I looked at the useless item that once was a necessity and It was only a few short months later that this once necessary devise was removed. I began looking around town and found that there were no payphones left anywhere in the city.

In 2018, CNN reported that there were still over 100,000 payphones in use, mostly in remote areas. The business was said to have earned over 286 million dollars in 2015 but the locations are basically New York and remote areas such as the Yosemite Valley. There are actually some places in the United States where there are no land lines and also no cell phone service. People who live in such areas must depend on payphone services. was a time when pay telephones and telephone booths were everywhere. Now, at least in my neck of the woods, everyone from teens to senior citizens can be seen talking on their mobile phones. In years past people would stand in line waiting for their turn to make a call at a photo me booth.

Characters in the movies and on television used the booths to chat and superheroes changed into their alter egos from the booth. I can recall when it cost a dime to use one of these forms of communication. It later went to a quarter and then was fifty cents by the time I stopped using them. I believe I heard someone say It cost seventy four be cents to mak a call before these telephones became obsolete.Seeing my grandson on that non working divise sent a shiver vup my spine because I realized it would soon be nothing but a relic of the past. 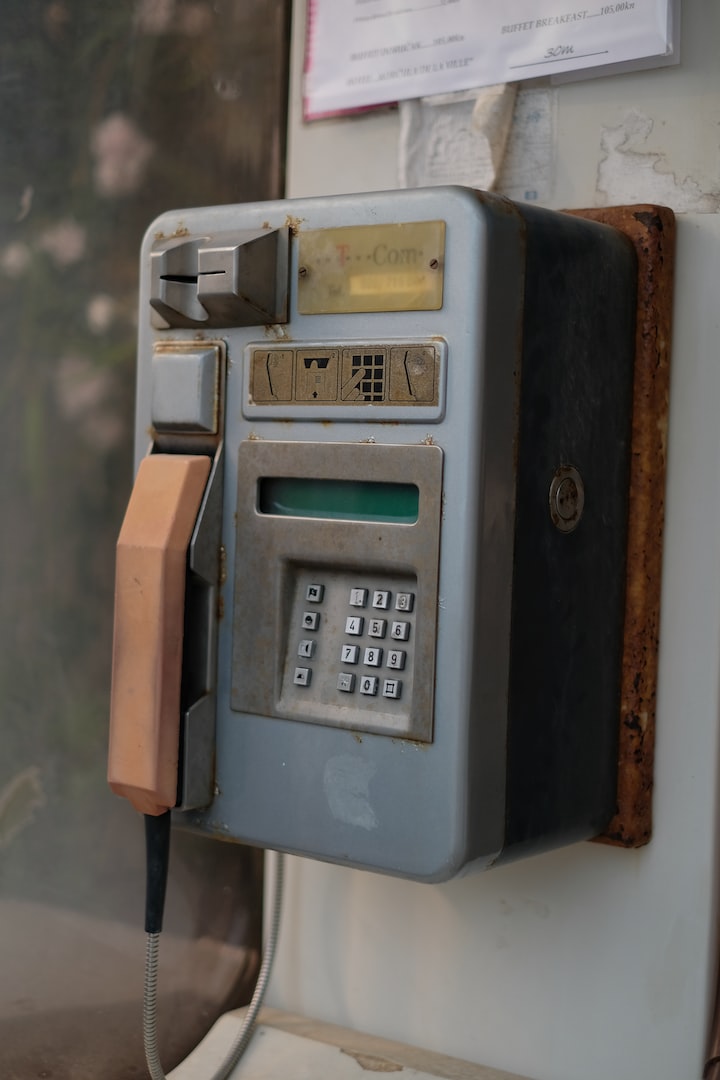 By Steve Gale on Unsplash

I actually felt as though I were in the Twilight Zone and watching some past event take place. It was a hot day with temperature near 90 and the breeze blew warm air into our nostrils. I imagined tumbleweeds rolling around the user less payphone and the song Tumbling Tumbleweeds came to mind. Here we were in the city, standing on concrete but I’m envisioning a scene right out of the old west. Once or twice as my grandchildren and aI walked to the store we saw people trying to use that old payphone or looking up numbers in the attached book. As mentioned earlier, a few months after this photo was taken, I noticed the telephone was gone. All that remained was the ground beneath it.

Vehicles drive over the area and people walk past it seemingly oblivious that a monument to past life has been removed. Young people growing up today have cell phones and some of their parents do not even use land line phones. They have no idea about rotary dial phones, wall phones, or payphones. They have contact lists for their acquaintances and will never have need of searching in a phone book or the yellow pages. These young people will not have to dial 0 for an operator because they can look up phone numbers online. They don’t have to dial a specific number for the time or the weather because it’s all in the palm of their hand. iPhones and Androids have ended the need for so much that was necessary in years past.

Many businesses have it now where you just touch their number and your phone will automatically dial it. Rotary dial and push button payphones are as ancient as the dinasaur is now. In today’s world everything is touch screen. The transition went so smoothly that I cannot recall any dates or times of when it all took place. As I looked at this image of my grandson, I realized that it has been a number of years since I asked the operator for a phone number or waited by a payphone for someone to call me back. This photo, however, of my grandson standing outside with that receiver to his ear is priceless. It was taken in mid July 2015 at around 2:00 PM EST. I now have an image of the last time anyone in my family had a payphone receiver to their ear. My photo is a lasting memory of this outdoor image from days gone by at least in this neck of the woods.

Cheryl is a poet, freelance writer, published author and former newspaper columnist. She is currently pursuing a degree in Liberal Arts and Social Sciences. Tips are greatly appreciated.