Charge Your Devices in Style with the Courant Wireless Charging Station

by Ryan Witt about a year ago in gadgets

It's hard looking cool when you're asking if somebody has a charger.

I am, admittedly, over prepared, in most cases. It may be because my Gameboy Color died once when I was at after-school care and I had to play Uno until my Dad picked me up, or it may be because I saw a girl swoon over a guy because he had a lighter even though he wasn't smoking. I don't know, I was pretty drunk.

Anyway... now that I put 50+ hours in at the office, I figured same rules apply, right? I always have my little Boy Scout knife on me if a package needs opening, or my phone charger for days I'm taking more calls than I did the entire year of 2010. Sometimes, I lend my charger out when I'm not using it, but that just means I've lost more power cords like this than you have fingers on your hand. It's a waste of money to keeping buying these stupid things, and a waste of time ordering them online when I should be working.

Then I got to thinking about big picture stuff. Between an iPad, my bluetooth speakers, my bluetooth headphones, the company's laptop, a portable charger... let's just say I have a lot of rechargeable devices.

Damn it be, the money spent! I was going to have to have all my devices powered to max capacity, and I was going to do it in style. Thankfully, Courant showed me how.

I was hooked right from the get go. 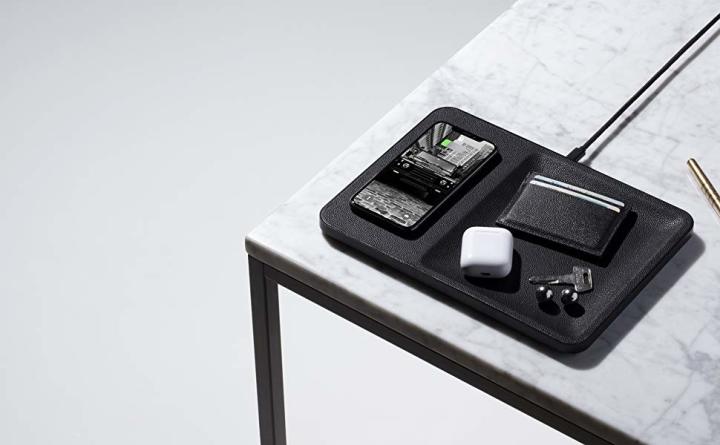 As soon as I opened my new Catch:3 from its packaging, I laid it down on my bedside table and simply admired it for a second. Not only was resting my hand against the Italian leather a dream, but the weighted, non-slip construction made sure I wouldn't accidentally knock it over in the middle of the night (along with everything else in it).

I placed my phone inside it (I had been tracking the delivery right to my doorstep and my phone was on its last leg of life). After the adrenaline of having waited for and receiving my new toy subsided, I laid down to rest my eyes. Which turned into an accidental 20 minute nap. Which turned into my phone being completely charged! I was absolutely floored.

Instead of going down to brag to my family about my cool, new toy, I decided I needed to do more testing. I dropped my watch, my bluetooth speaker, and my iPad onto tray, and went down for dinner. When I came back? I was not disappointed.

It features a minimalist design, but the quality isn't lacking.

I wouldn't call myself a tech aficionado per se. Having the newest iPhone model was never a top priority of mine, and I only have all that other gear because I live a pretty active lifestyle. Since I am usually on the move though, having a portable, wireless charger just made sense to me.

At first glance, Courant almost looks more like a design company than a tech company. The Catch:1 and Catch:3 are made of premium, Italian leather, and have some kind of Qi hardware that allows them to instantly start working on charge your phone, watch, or other appliances. Priced at less than $100 and $1200 respectively, I knew I was getting a product I could depend on.

I brought Courant's charging tray into work the very next day. After I laid it down onto my desk and explained what it does to the few coworkers who asked, I had people I never even saw before swinging by to ask if they could drop their phone off for a quick charge. Those that were "just going for lunch" or "had a meeting run over" were visibly upset when they saw I had moved their phone out of the tray to make room for someone else's device, but they quickly got over it when I handed their cellulars back with a new lease on life.

Suddenly, I was a very popular guy. People were coming up and asking how I was doing and asking about my day and if they could charge their devices...

More than that though, I was the reason everyone was more productive. No more dead batteries, no more stressing about whether phones would make it through the day. And everyone knew it. So long as I had my sleek, wireless, Courant charging tray with me, everyone met me with a smile and a nod.

See all posts by Ryan Witt →